RELEASE BLAST: FOR HER PROTECTION by AMBER BARDAN includes REVIEW

Enter to Win a Digital Set of
DIDN'T I WARN YOU and DIDN'T YOU PROMISE,
Book 1 & 2 in the Bad for You series 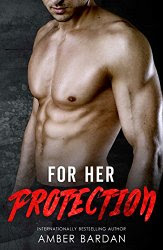 For Your Protection
By: Amber Bardan
Releasing July 19, 2016
Self-Published
+ Add to Goodreads

Yet pleasure seems to be the one and only thing on Charlize's mind the moment Connor steamrolls into her life. Desperate to save her family company, prove she's more than a pretty face and worthy of being CEO, pleasure is a distraction she can't afford.

She doesn't want a bodyguard, especially not one whose caveman heroics kick her libido into hyperdrive. Surrounded by enemies, she's not sure if Connor is a man she can trust.

Connor knows better than to get personal with clients. Yet there couldn't be anything more personal about his feelings for Charlize. He'll win her trust, preferably one orgasm at a time.

With Connor in her office, her home, driving her to sweet, merciless distraction, there's only so long Charlize can resist his sexy, dominant brand of protection.

WARNING: This is an Amber Bardan Alpha Romance, featuring one dirty-talking hero obsessed with his heroine, and a Happily Ever After. No cliffhangers.

She came right at him.
Connor leaned back in his seat. Shit. You’d think five-years in the job, he’d have more discretion.
But what red-blooded man wouldn’t stare at her?
She weaved between tables, hips swaying, full-fucking-irresistible cleavage peeking out from her blouse.
He kept his eyes on his glass, even if his peripheral was having a feast.
“Hi.” Her voice was as lush as the rest of her.
He’d fucked up. She’d noticed him watching and now there’d be a confrontation. If he was compromised, then he’d be forced to take matters to the next level.
He looked up.
Mother-fucker.
Jet-black hair flowed over her shoulders. He’d seen her tug that hair from its ponytail and fluff it. Cheeky, attention-seeking minx. It hadn’t been so bad from over there. He hadn’t been able to smell her as he did now. He hadn’t known she used vanilla scented shampoo then. His fists curled. But her hair wasn’t the problem, even if he kept imagining it curled around his fist. The problem was her wide, almond-shaped eyes the color of butter warming in a pan, melting his brain.
“What?”
She flinched, smile slipping, then reached to her front. He tried to stay still, damned hard work, because she reached between those magnificent tits and pulled out a bill. “I’ll give you ten dollars if you kiss me right now?”
He glanced at the money in her hand. Un-freaking-believable. “Do I look like a gigolo to you, woman?”
“No, I imagine the scowl would be terrible for business.” She laughed, the husky sound of it had his muscles clenching. “But I saw you looking at me, and I really need you to kiss me, so if the money’s offensive, would you just do it for free?”
Kiss her for free?
It’d cost if he kissed her—no way out of that, but he’d be the one paying.
She held his gaze, then sighed and squeezed the bill back into her top. “Never mind, I must have misunderstood.”
Her big eyes went soft and sad.
Fuck, did she do that on purpose? Did anyone ever actually say no to her?
He scooted back his chair. Well, if was a kiss she wanted, he’d damned well show her how it’s done.
Her lips parted as he rose, and her head tipped back. She gulped. He was used to that. Little women like her realizing they’d bitten off more than they could chew. She probably hadn’t noticed when he’d been seated that he’d have over a foot on her.
Maybe he’d have gone slow, moved in gently, if she hadn’t demanded that last part—right now.
The cheek.
He took a step. She swallowed again. This time he let himself take in the sight of her curves—he let his gaze trail all over her.
He reached for her shoulder, but the next thing he knew he’d buried his hand in that hair he’d been fantasizing about since he clamped eyes on her. 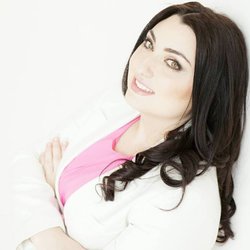 After spending years imagining fictional adventures, Amber Bardan finally found a way to turn daydreaming into a productive habit. She now spends her time in a coffee-fueled adrenaline haze, writing romance with a thriller edge.
She lives with her husband and children in semi-rural Australia, where if she peers outside at the right moment she might just see a kangaroo bounce by.
Amber is an award winning writer, Amazon Bestselling Author, and member of Romance Writers of Australia, Melbourne Romance Writers Guild, and Writers Victoria.
Author Links:  Website | Facebook | Twitter | GoodReads
at 21:57