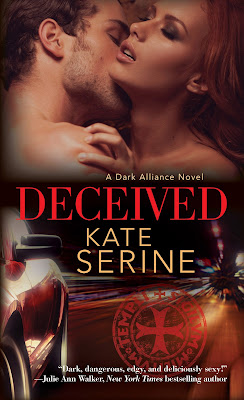 In Deceived (Dark Alliance #1) by Kate Serine, Luke Rogan loves working as an operative for the Dark Alliance, but his latest assignment is his toughest yet. Protecting Elijah and Sarah Schofield is his number one priority, and he will do anything to keep them safe, even if it means going against his boss's orders. Not only because the Dark Alliance need to keep the knowledge deeply embedded in Elijah's head secret, but because Sarah and her son are coming to mean more to him than an assignment.
Sarah Schofield will do anything to keep her son safe, even if it means teaming up with the handsome stranger that rescues her and her son from the dangerous people after them. She never could have imagined falling in love again, but Luke Rogan is a man hard to resist.
Being a total fan of romantic suspense, I was really looking forward to reading this story, and I've got to say that Ms. Serine does not disappoint. From start to finish, this story was everything I could have hoped for and more when it comes to the genre. As it encompassed compelling and well-written dialogue, remarkable characters that drew me into this story with everything they go through, and a fast-paced plot that had a perfect blend of suspense and romance to make this story a real page turner.
As for the dialogue, it was intense because it's not only narrated by the main characters but also the antagonist; a dangerous man that wants Elijah since the information the child knows will bring the bad guy power. However, there were some light-hearted moments between Sarah and Luke as well as the main characters and Elijah that had me laughing or smiling. There is so much love between Sarah and her son, and I liked that Elijah was just as protective of his mom as she was of him.
Both Luke and Sarah were incredible, and together with the secondary characters had me flipping the pages quickly to discover how this story would develop. Would Luke be able to keep Sarah and Elijah safe? Would Sarah be able to handle everything she discovers about her family and her late husband? How far would the bad guys go to learn the information Elijah knows? I felt sorry for Sarah because it isn't easy for her. Her father has kept a lot from her, and being so in the dark as she was, it took time for her to process. Yet, in saying that, I thought she handled everything quite well.
The heroine is strong, brave, and I liked how determined she is to protect her son. Everything Luke teaches her when it comes to protecting herself comes in handy, and she definitely shows the bad guys that she's a woman not to be messed with. She's also very smart and proves that with the way she sacrifices herself to prevent anything happening to Elijah. The fact that she trusts Luke, even after he admits why he's gotten so close to her, goes to show that she also knows he'll do whatever it takes to protect her.
While Luke, he's honorable, loyal and a very good operative for the Dark Alliance. Certainly, he'll do whatever it takes to protect Sarah and her son, especially when their lives have been turned so upside down. He's had quite an interesting past and it goes to show why bad guys are hesitant to go up against him. His reputation proceeds him, and it was understandable why the Dark Alliance recruited him. I also liked what he was willing to do to be with Sarah. She was more important to him than his job.
Overall, Ms. Serine has penned a very good novel where the sex scenes were hot, and illustrated the strong chemistry the hero and heroine had from the moment they met. The way this story ended was wonderful, as Luke finding love finally has his boss looking to change the rules when it comes to relationships while being an operative. I would recommend Deceived by Kate Serine, if you enjoy romantic suspense where the hero and heroine have some pretty tough obstacles to achieve their happy ever after. Also, this first book of Ms. Serine's Dark Alliance series has me looking forward to more of this series.
OVERALL RATING:

BLURB:
Luke Rogan's assignment is simple: secure young Elijah Scoffield and his mother and bring them back to headquarters--just an ordinary mission for an operative of the Dark Alliance. But Elijah is no ordinary kid. He's the grandson of one of the country's most influential politicians--a man privy to the Alliance's most valuable secrets, including its centuries-long connection to the Knights Templar. And someone else is attempting to capture the boy--someone who's proven he doesn't give a damn about collateral damage. . .

Heartbroken at the lies that tore her world apart, Sarah Scoffield will do anything to protect her son--even if that means teaming up with a deadly stranger. But Sarah soon finds herself falling in love with her dark hero. And as danger stalks ever closer, the fiery desire that claims them awakens in Sarah passions she'd thought dead and buried long ago. . .

“We’re as safe here as anywhere until we get to my place,” Luke assured her.
She lifted a brow. “Yet you’re acting like you expect someone to come barging in and attack us at any moment.”
He took a step closer and immediately realized his mistake when his heart started pounding at the nearness of her. Shit. He shoved his hands into his pockets to keep from touching her. “If being paranoid is what’s going to keep you and your son alive,” he said, “then guilty as charged.”
“Please don’t take this the wrong way, Luke,” she began, edging closer, damn it all, “but why does it matter so much to you if Eli and I are safe? You don’t know us. I get that you’ve been given an order, but I also heard you talking to your commander and know you’d rather be somewhere else. If you’d insisted that someone else watch over us, I would’ve understood. I can just go to the police, tell them what happened. I’m sure it’ll be fine.”
Luke stared at her for a long moment, trying to figure out the answer to her question. Hell if he knew why it mattered so much to him that he keep them safe. In the technical sense, he protected people every day and had for going on fifteen years when he added up his time in the military and then working for the government and now with the Alliance. But she was right—this assignment was hitting him on a level he hadn’t anticipated.
“I guess because, when I wasn’t much older than Eli, someone took my mother and me in, watched over us when we needed it,” he finally said, not sure where the explanation was even coming from. “And someone else did the same thing for me again a few years ago when I was in a really dark place—except this time the enemy I was up against was myself. If it wasn’t for that person stepping in, I don’t know where I’d be. But dead is a damned good bet.”
Sarah straightened. “Oh. God. I’m sorry.”
“Don’t be,” Luke told her. He shook his head as his vision went a little blurry. Suddenly too tired to stand, he leaned against the edge of the sink. “I made a promise to keep you and Eli safe, Sarah. I’ll keep it. There’s no way I’d abandon you, so don’t worry about it.”
The next thing he knew, Sarah’s arms were around his neck, hugging him tightly. He resisted the urge to wrap his arms around her and hold her close, to bury his face in her hair and let the warmth of her wash over him. But when she pressed a kiss to his cheek and whispered, “Thank you,” in his ear, he almost gave in.
Fortunately, before he could move, she stepped away and hurried back into the room with Eli, leaving Luke gaping at the empty doorway and wondering exactly what the hell he’d gotten himself into… 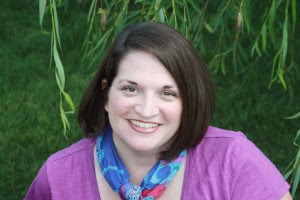 Kate SeRine (pronounced “serene”) is a hopeless romantic who firmly believes in true love that lasts forever. So it's no surprise that when she began writing her own stories, Kate vowed her characters would always have a happily ever after.
Kate lives in a smallish, quintessentially Midwestern town with her husband and two sons, who share her love of storytelling. She never tires of creating new worlds to share and is even now working on her next project—probably while consuming way too much coffee.
Kate is also the author of the award-winning Transplanted Tales paranormal romance series and the Protect & Serve romantic suspense series.
Connect with Kate at www.kateserine.com, Facebook.com/kateserine, or on Twitter @KateSeRine.
Author Links:  Website | Facebook | Twitter | GoodReads