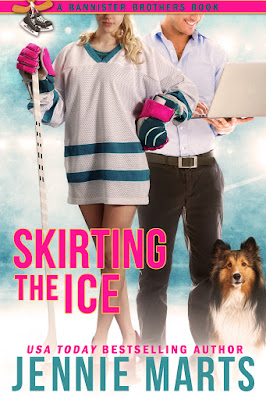 In Skirting the Ice (Bannister Brothers #3) by Jennie Marts, If there's one girl Jack Bannister has never forgotten, it's his teenage crush, Murphy Ryan. Never did he think he'd see her again, but after inheriting her grandfather's house, she's moved in next door. However, trouble has followed Murphy to Colorado, and unless Jack can help her figure out who her stalker is, happy ever after might not be possible for the pair.

After reading my first book by Jennie Marts, I have looked forward to every release since, and this story was fantastic in the way it provided plenty of laughs, a good dose of suspense due to Murphy's stalker, and a storyline that entertained me from start to finish. The way this story began with Jack making a error in judgment by trying to take something that wasn't his had me smiling, and Murphy's reaction was understandable. What did Jack think he was doing? Furthermore, the moment the hero and heroine come face-to-face again for the first time in years was memorable. Both were hopeful that they'd see each other again, but never imagined it would be with Murphy taking residence next door.

The dialogue was intense due to the main characters back stories, especially that of the heroine. She never expected trouble to follow her all the way to Colorado, and yet it has. How is she going to handle her stalker? Will she let Jack and the police help her? As the incidents escalate, I felt sorry for the heroine. Even though, she does her best to hold it together, it's difficult for her to deal with. Because although she has an inkling of who may be stalking her, she can't prove it. Murphy is strong, brave and I liked how determined she is to get the chance to play in an all women's ice hockey league. She has the resources to make it happen, and nothing will stop her from achieving her dreams.

While Jack, he's definitely the opposite to Murphy. Where she's outgoing and wild, he'd rather stay at home playing video games or working. Yet, they seem so right for each other. Jack has issues when it comes to his brothers. They're jocks while he's the nerd, and at times he feels inadequate. Will Murphy be able to convince him that he's the Bannister brother she wants? Also, I liked how protective Jack was of Murphy. The heroine needed someone to confide in when it came to her stalker, and Jack is there for her. Then there's the teasing dialogue between Murphy and Jack. Throughout, it feels like they've been friends that talk regularly, when in reality, they haven't seen each other in years.

Overall, Ms. Marts has penned a wonderful novel in this story where the romance was a bit of the sweet side and didn't go into a lot of detail when it came to intimate moments. However, in saying that, there were a few hot kisses. The way this story ended was intense due to what happened between the main characters and the stalker, but ended perfectly with Jack finally realizing how much Murphy means to him and that there's no way he can let her go now that she's back in his life. I would recommend Skirting the Ice by Jennie Marts, if you enjoy romantic comedy with a dose of suspense or the opposites attract trope.

BLURB
"The Bannister Brothers series has everything I love...hockey, humor, and heart!" - Kristin Miller- New York Times Bestselling author
Buttoned-up accountant Jack Bannister lives an uncomplicated life until his teenage crush moves back into the house next door…all grown up and sexy as hell. Murphy Ryan is still wild and reckless, and danger has followed her to Colorado.  Jack will do whatever it takes to protect her, even it means letting her go…again.
Murphy Ryan is focused on building a new NHL women’s hockey team. But staying on her game is hard with the distraction, and the memories, of the hot nerd in the house next door. Jack Bannister had been her first kiss, and she wants him to be her last. With his dry humor and sexy glasses, being smart never looked so good.
Jack’s been given a chance to win back the one that got away, but worries this gorgeous hockey player is still out of his league. He’s kept his heart on ice, but now that Murphy’s back, she might be the one to finally thaw it.
BUY LINKS: Amazon eBook 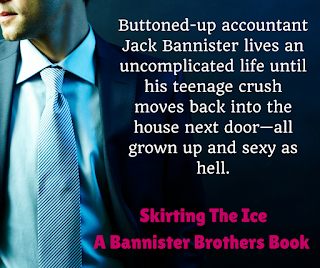 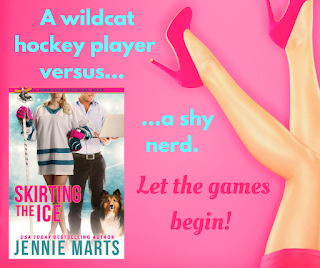 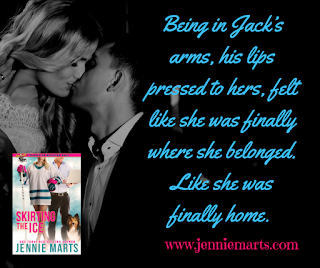 He looked down at himself, his eyes widening as if noticing for the first time that he was wearing only a pair of black boxer briefs.


She was noticing too. She’d already seen him shirtless and knew that his chest was hard and muscled, but this was different. He was practically naked. And hot as hell, his body reminding her of a swimmer’s, lean and toned.
And he was standing very, very close. Mere inches separated them.
Suddenly, her heart was pounding in her chest again, but this time for a different reason. She was still scared, but this was another kind of frightened.
This time she wasn’t frightened that something was going to happen—she was scared that it wouldn’t.
Jack seemed scared too. She reached up, softly resting her hand on his bare chest.
He inhaled sharply at the touch of her fingers. His chest trembled slightly below her hand.
Gazing up, she peered into his eyes, questioning, searching for a signal to keep going.
His Adam’s apple bobbed in his throat as he swallowed. But he didn’t move, didn’t pull back. He may have even leaned forward a little.
Was that the signal she was waiting for?
She licked her lips, her mouth suddenly dry. His gaze shifted to her mouth, and she heard his quick intake of breath through his own parted lips.
God, the guy had great lips. And everything in her yearned to kiss them, to taste them, to taste him.
They stood still, neither speaking. Neither moving forward nor back.
One of them had to do something. She could either make a move herself or continue to wait to see if he would eventually try to kiss her again.
To hell with waiting. Either he wanted to kiss her or he didn’t.
Only one way to find out.
She leaned toward him, her hand still on his chest, as she pressed her lips against his.
One soft kiss. Gentle. Slow.
She pulled back, just a hair’s breadth away, her lips still close, but waiting, dying for an invitation to kiss him again.
He froze, just for a second, his body stiff, then his hands slipped around her waist, and he pulled her tightly against him.
He crushed her lips with his, taking her mouth in an onslaught of passion, kissing her as if he were a starving man and she was his first meal.
His hands slipped up her back, one sliding across her neck to cup her cheek while the other dove into her hair.
Tipping her face, he slanted his mouth across hers, deepening the kiss.
Parting her lips, his tongue slid between them, a soft moan escaping him as he tasted and savored her mouth.
Her hands gripped his muscled shoulders, holding on as she kissed him back with everything she had. Everything she’d been holding onto all of these years.
The tension of this kiss had been building for a decade, and if this was the only kiss she ever got to share with Jack Bannister, she was going to make it worth the wait.
And make it so that he wouldn’t be able to resist kissing her again.
Sliding her hand along his neck, she tangled her fingers into his soft hair, pulling his head closer still, as if they could get any closer.
Every nerve inside of her tingled with pleasure, with warmth and with something else—a feeling that she hadn’t had in a long time. Being in Jack’s arms, his lips pressed to hers, felt like she was finally where she belonged. Like she was finally home. 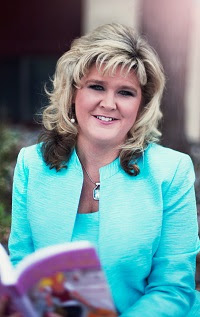 Jennie Marts is the USA Today Best-selling author of award-winning books filled with love, laughter, and always a happily ever after. Readers call her books “laugh out loud” funny and the “perfect mix of romance, humor, and steam.” Fic Central claimed one of her books was “the most fun I’ve had reading in years.”


She is living her own happily ever after in the mountains of Colorado with her husband, two dogs, and a parakeet that loves to tweet to the oldies. She’s addicted to Diet Coke, adores Cheetos, and believes you can’t have too many books, shoes, or friends.


Her books include the contemporary western romance Hearts of Montana series, the romantic comedy/ cozy mysteries of The Page Turners series, the hunky hockey-playing men in the Bannister family in the Bannister Brothers Books, and the small-town romantic comedies in the Lovestruck series of Cotton Creek Romances.
Author Links:   WEBSITE | FACEBOOK | TWITTER | GOODREADS

Guest post for SKIRTING THE ICE: A Bannister Brothers Book


In SKIRTING THE ICE, the third and newest book in the Bannister Brothers series, a hot nerd meets his match with a wildcat hockey player. Sparks fly in this second chance romance where opposites attract and a cute nerd gets a chance to win back his teenage crush.


Buttoned-up accountant Jack Bannister lives an uncomplicated life until his teenage crush moves back into the house next door—all grown up and sexy as hell. Murphy Ryan is still wild and reckless, and danger has followed her to Colorado.  Jack will do whatever it takes to protect her, even it means letting her go…again.


Murphy is focused on building a new NHL women’s hockey team. But staying on her game is hard with the distraction, and the memories, of the hot nerd in the house next door. Jack Bannister had been her first kiss, and she wants him to be her last. With his dry humor and sexy glasses, being smart never looked so good.


This story is a wild ride that will make you smile and root for the underdog, which in this case is a hot accountant with glasses, asthma, and great abs. But brains can overcome brawn and here’s 5 Reasons why Smart Just Got Sexy:


1-      The Glasses – There’s something about when a guy takes off his glasses that is oh so hot! It’s like he’s undressing his face and letting you see his vulnerable side.


2-      Smart guys know how to research, and they pride themselves on getting things right. (wink, wink)


3-      Smart Guys are punny—they know how to use clever word play and sometimes quote poetry. They also sometimes quote algebraic equations- but in Jack’s case, it comes out quite romantic.


4-      Bowties—imagine a hot nerd mixed with a Chippendales dancer


Well, that ought to put you in the mood for some hot nerd action.


I fell in love with Jack and Murphy as I wrote their story, and I hope you do too. This book is full of snappy dialogue, a little suspense, and plenty of sizzle. And if you’re already a fan of the Bannister Brothers series, you’ll be happy to know that all of the brothers make at least one appearance in this book, and you’ll get to meet the youngest brother, Beau.


Thanks so much for taking the time to check out my new book. To keep on top of all my news, including sales and new releases, please visit www.jenniemarts.com to sign up for my newsletter and I would love to invite you to join my street team, Jennie's Page Turners. Click HERE to join on Facebook.


Thanks again and I hope you love the new book. Happy Reading!

FIRST BOOK OF THIS SERIES ON SALE 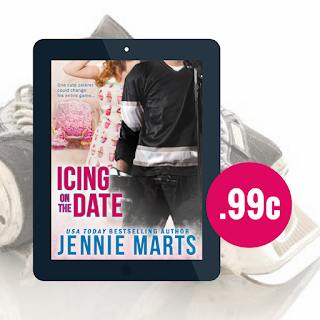