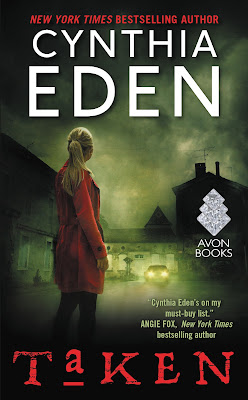 In Taken (LOST #5) by Cynthia Eden, as a survivor of the infamous serial killer, Death Angel, Bailey Jones has struggled to move on with her life. Especially since everyone from the cops to her therapist believes she imagined the woman she helped escape. Determined to find the other survivor, she hires LOST, an agency known for achieving the impossible. However, Bailey never counted on falling under the spell of Asher Young, the agent assigned to her case. With danger closing in, will Bailey sacrifice all to save the one person that has come to mean so much to her?

Although I haven't read the other books of this series, I found this book can easily be read as a stand-alone. Right from the beginning, the prologue sets the fast pace of this story by giving readers the knowledge of how much Bailey has suffered and by the next chapter reveals how desperate she is to find the woman she helped escape. Can LOST help her? What will she have to do to help in the investigation?

The dialogue was really entertaining and intense due to the main characters back stories, the plot twists and the investigation into who is committing the new crimes. Who can Bailey trust besides Asher? Furthermore, then there's the fact that Asher's past is just as harrowing as Bailey's. What he and his sister went through wouldn't have been easy, and it's made him the tough, hardened, protective man he is. Luckily, Bailey and Asher manage to tear down the solid walls each other have put up to protect themselves from further hurt.

Both the main characters, as well as the secondary characters had me glued to this story with their back stories and their dialogue. Asher is determined to show Bailey how much she can trust him, which he does every time he protects her from an attack by the person who is targeting her and killing others. He's also hard-working, confident in his abilities as an agent of LOST,  and will do anything to keep Bailey safe, even if it means revealing a side of himself no one (such as his sister and boss) has ever witnessed before.

While Bailey, she's strong, brave and I liked how determined she was to confront the past and finally move on from it, no matter how dangerous things get. She suffered badly at the hands of serial killer, Death Angel, and trusting someone doesn't come easy after what happened. Yet, Bailey had me smiling every time she made a decision that put her on the path to healing from her past. Such as showing Asher that she trusts him and by doing the opposite to what the cops want her to do, because there's nothing more important than taking down the person responsible for committing the new murders.

Overall, this was a really good book where the secondary characters kept me entertained just as much as the main characters, because it felt like most of them (besides the local cops) could have been capable of committing the crimes. The way this story ended was intense due to what Bailey and Asher face, and what happens to one of them. Yet, it had to happen to make both main characters realize that there's no way they can let the other get away. They're meant to be together. I would recommend Taken by Cynthia Eden, if you enjoy romantic suspense that encompass characters with harrowing back stories that help each other to heal from the hurts of their pasts.

Bailey Jones somehow survived her harrowing abduction by the infamous Death Angel. But while her physical scars have healed, she can’t stop wondering about a woman she helped to escape, who simply disappeared. When LOST agent Asher Young is assigned to her case, Bailey instantly feels an attraction to the intense ex-SEAL who seems to be carrying dark secrets of his own.

Asher can’t afford to let his growing feelings for Bailey distract him from his job. Only she can soothe his horrific nightmares, but the last thing he wants is for the demons from his past to ever hurt her. Bailey has gotten past his guard, and the emotions he feels for her—they’re as dark and dangerous as the past he doesn’t want to face.

COULD COST BOTH THEIR LIVES

When corpses begin surfacing—all marked with the same tattoo depicting the Death Angel’s calling card—Asher must race to stop a twisted killer who wants nothing more than to claim his next prize: Bailey . . .

“Bailey Jones . . .” Asher said her name softly, as if tasting it on his tongue. “There are a few things you should know about me before we begin.”
There are things you should know about me, too. But I’m not going to tell you . . . or you won’t help me.
“First, you don’t have to fear me. Part of my job at LOST—well, let’s just say Gabe hired me on because he wanted a bit more muscle. Protection is my role. I’ll keep you safe and track down any clues about that missing woman. On my watch, nothing will happen to you.”
She nodded even though---


I don’t believe you. There is no safety. I learned that.
“And second . . . you don’t have to bullshit me.”
Now she blinked in surprise.
He laughed, a deep, rough rumble of sound that Bailey found she liked to hear.
“You think I can’t tell when you’re wearing a mask? You’ve got yourself locked down tight, under careful control, don’t you? But you don’t have to do that with me. I’m not one of the North Carolina deputies. I’m not going to judge you. And I’m not some lame-ass reporter who wants to splash your story all over the world.”
I wear a mask all the time now because something is wrong inside of me. It has been, ever since that fire. That hole. That hell.
“So let’s put a no-bullshit rule in effect,” he murmured.
Her hands curled around the steering wheel. “Liking rules, is that more of a military thing again?”
“Wanting to break rules . . . that’s why I left the SEALs.”
He’d been a SEAL? She turned to look up at him. “Is there a rule number three?”
“We’ll get to that rule later . . .”
She started the vehicle. “I’ll follow you to your place.”
“Do you have any rules for me?”
Don’t hurt me. Don’t judge me. Don’t pity me. Bailey cleared her throat. “I’m sure we can get to those rules later, too.”
He slammed her door shut. Through the window, Bailey watched as he strode away—not to another car, but to a shiny, big monster of a motorcycle. He climbed on, revved the engine moments later, and that rumbling growl filled the parking garage.
Asher slid the helmet over his head—a black helmet with a dark visor that completely obscured his face. Her heart beat faster as she stared at him.
Dangerous.
That had been her first thought when she’d seen him in the conference room.
But he was on her side. Not a threat to her. He’d help her.
At least, that was what she hoped. Because if something didn’t change soon, Bailey was afraid that the deputies would be right about her. Her shrink would be right.
I may go crazy. 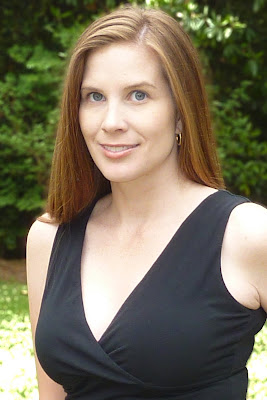 Since she began writing full-time in 2005, Cynthia has written more than thirty novels and novellas. She lives along the Alabama Gulf Coast.
Author Links:   WEBSITE | FACEBOOK | TWITTER | GOODREADS