REVIEW & GIVEAWAY: IN YOUR ARMS by SHANNYN SCHROEDER 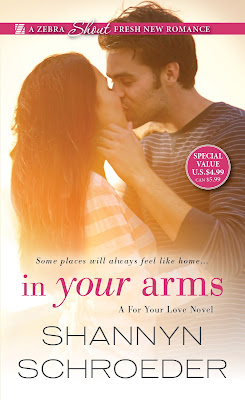 In Your Arms
For Your Love #2
By: Shannyn Schroeder
Releasing December 27, 2016
Zebra Shout

In In Your Arms (For your Love #2) by Shannyn Schroeder, for years Emma has strived to be an independent woman and not follow in her mother's footsteps when it comes to relationships and barely being able to take care of herself let alone her family. But the moment Sean O'Malley comes to her rescue when her car breaks down, Emma realizes she's about to fall into the same pattern she always does in picking unsuitable men. Can she resist falling for the bad boy; or will Sean find a way to prove to Emma she's misjudged him, so they can have a future together?

Having enjoyed the first book of this series, I couldn't wait to dive into this book to read more about the O'Malley family, and I've got to say that this story was engaging, fast-paced and I loved the obstacles this couple had to overcome to achieve their happy ever after. Right from the beginning, I couldn't help but feel sorry for the heroine. Her family aren't the most reliable, and it made me sympathize with her because brothers are supposed to love and want to protect their sisters, but Emma's brother was a selfish jerk that -- it seemed -- didn't care about anyone but himself.

As for the dialogue, it was intense and a tad emotional due to the main characters back stories, what happens to one of the children that Emma teaches, what lengths Sean will go to in protecting the heroine and the obstacles these two have to overcome to achieve their happy ever after. Growing up, Emma never had stability and it's something she's promised herself she'll always have by working hard and having her own place to come home to. So, it's no wonder she has doubts about Sean because he has no job security, lives somewhere he shouldn't at his age, and doesn't want a serious relationship like Emma does.

I loved Sean. He doesn't misrepresent himself and is pretty much the kind of guy that lives by the words 'what you see is what you get'. Yes, he's definitely not the kind of guy Emma is wanting for her future, yet I  was cheering for him to be able to change her mind the more of this book I read. Because he had what it takes to win her heart by accepting the good advice of the secondary characters and by making changes in his life. Of which, I thought, the changes he planned to make were really good and proved to Emma how much he wanted her in his life by wanting to be a better man for her. While Emma, she's strong, brave I liked how much she's achieved throughout her life, considering she didn't have the easiest of times with her family and in school. However, she did frustrate me at times when it came to dealing with her family and her whole mission to find her future man when she had Sean. She gave into her mother's demands way too easy. Indeed, she let the woman take advantage of her, instead of saying 'enough was enough.'

Overall, Ms. Schroeder has penned another really good novel for this series, which encompassed some really hot, passionate sex scenes that prove it isn't easy for Emma to resist Sean, even though she believes he's not the right man for her. The way this story ended had me cheering for this couple, as Sean does his best to win Emma back by revealing what his future holds in store for him and how she makes him want to be a better man, so they can eventually have the kind of future the heroine wants with the man she loves - marriage and kids. I would recommend In Your Arms by Shannyn Schroeder, if you enjoy the opposites attract trope; or a story where the hero and heroine become friends that end up as friends with benefits before they realize how right they are for each other.

BLURB:
A KNIGHT IN SHINING LEATHER…
Sean O'Malley has never tried to hide who he is. He shows it in the motorcycle thrumming between the legs of his tight jeans…the shaggy hair that falls in his gorgeous eyes…the wicked gleam in his smile when he asks Emma out for a drink. Sean is a rebel, a bad boy, and a ton of fun: exactly the kind of guy she's sworn off forever.

Emma isn't just the prim kindergarten teacher she appears to be. And somehow Sean can tell. As soon as he pulls up to her overheated car he knows that a fast bike and a cold beer will fix her rotten day better than compliments or a bubble bath. Her straitlaced exterior and her wild heart light him up. But Emma wants to escape her past and settle down—and if her desk jockey dates don't understand where she comes from, at least she doesn't worry about them bringing her back.

One weekend of intense connection can't change the paths Sean and Emma have chosen. But with a little space to be themselves together, maybe the rest of the world can wait...