REVIEW: ACCIDENTALLY IN LOVE WITH THE PILOT by TERI ANNE STANLEY 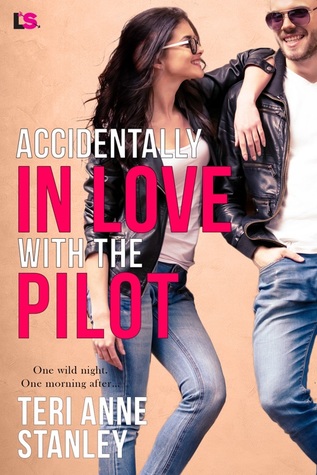 Fighter pilot Ben Rutledge loves his solitude. Which means spending a month of leave in overcrowded, over-glitzy Las Vegas isn’t up his alley, especially after his friend ditches him. His first inclination is to bow out, and quickly. Instead, he finds himself sharing drinks—and a whole lot more—with a sexy woman celebrating her birthday. After all, it’s just one night, and he can go back to his quiet life tomorrow.Megan Shuttlekrump doesn’t have time for a boyfriend, much less a husband. But a night of celebratory drinks with a handsome stranger ends with a ring on her finger—and no memory of how it got there. Her new “husband” is over the top hot, but he’ll be out of her life once his leave is over. As long as they can find out which of the thousand or so chapels in Vegas married them…

In Accidentally in Love with the Pilot by Teri Anne Stanley, Megan Shuttlekrump is a devoted family member and would do anything for those she loves. It's why she doesn't have time for a relationship. However, when the gorgeous Ben Rutledge enters her life, she realizes her life will never be the same, especially when she discovers they're married. Will Megan give Ben a chance or will she walk away from her shot at happy ever after because she'll never be able to give Ben the time and attention he needs as her husband?

What a highly entertaining and charming read Ms. Stanley has delivered in this book where the main characters were fantastic, especially from the moment they were introduced to each other; the dialogue was compelling and had me laughing at times because the heroine's family are a bit full-on when they're all together and protective of the heroine, which is proven with their reaction to what they believe is her acting out-of-character. She's always the reliable and sensible one and it felt at times they took her for granted because she's always doing things for them.

As for the dialogue, it was intense due to the main characters back stories, but I loved the playful banter between the hero and heroine at times, as they deal with her family's quirkiness and the fact that they're married. Will they stay married? Will they ever discover what happened the night they were married? Moreover, the heroine is resilient, courageous, kind, caring and I liked that she would do anything for family, especially since they've done so much for her. While the hero, he's confident, charming, has an interesting career and I loved how determined he was to win the heroine over when it comes to their marriage because she's the first woman to spark something inside of him in a while. I also enjoyed the love he had for his job.

Overall, Ms. Stanley has delivered a superb read in this book where the chemistry between this couple was intense; the romance was delightful and had me loving this couple together; and the ending left me completely satisfied with how things turned out for Megan and Ben. However, it was the epilogue that wrapped this story up perfectly because of the surprise the heroine has for the hero when it comes to how hectic their future is going to be. I would recommend Accidentally in Love with the Pilot by Teri-Anne Stanley, if you enjoy the accidental marriage trope, the mysterious strangers trope or books by authors Kadie Scott, Stefanie London, Kira Archer and Heidi Betts.