EXCERPT BLITZ - HOW TO SEDUCE A BAD BOY by TRACI DOUGLASS 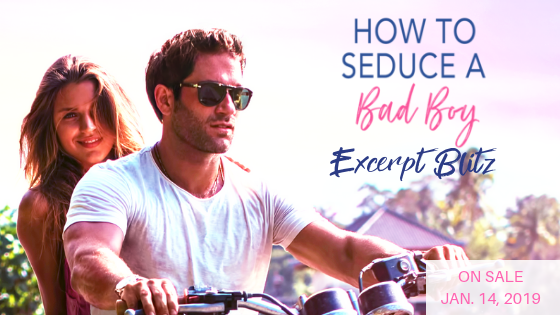 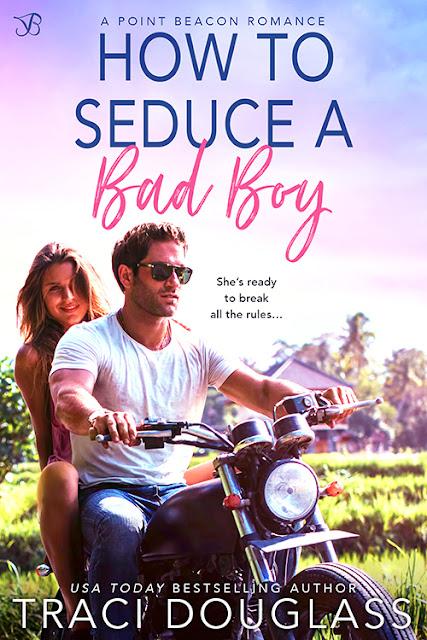 Melody Bryant has heard it all before. Sure, she's the epitome of the stereotype for a librarian. Loves order. Loves rules and deadlines. Loves books. But what she doesn't love is still being a virgin at twenty-four. Unfortunately, the only guy she's ever been interested in turned her down flat. And then left town. Eight. Years. Ago. Ugh.Now her birthday is fast approaching and she just can't take it any longer. She's finding a guy before her birthday in five weeks or she's adopting two more cats and fully embracing becoming "the crazy cat lady." But when her latest date ends in epic failure--everyone thinks of her as the "proper librarian," she realizes what she needs is to ruin her reputation. And she knows the perfect guy to help her: the baddest bad boy in town. This Army vet won't know what hit him...

Adam rushed down the porch steps to the sidewalk to his bike parked at the curb, unable to get his best friend’s face out of his head. If James, who was thousands of miles away, sensed something was up here, then how obvious was it to the people who saw him every day? Man, he had it bad for Mel, and that wasn’t good. He didn’t want to hurt her. Or her family.
And he never wanted to break his promise to James or lie to his best friend again.
He owed the guy too much to do that.
Most of all, he absolutely didn’t want to fall in love. Not with Mel.
As he cranked the Harley’s engine, James’s words reverberated in his mind.
Hate to see her end up with some player like us...
Adam’s reputation in the romance department was less than stellar, to put it kindly.
You’re not good enough for her.
Except when he was with Mel, she made him feel like he was good enough. She made him feel like he could be the man she thought he was. Someone strong and worthy and brave.
Someone deserving.
Then he’d gone and made that stupid promise to James. To look after Mel, to take care of her, to keep her from falling in with the wrong sort of guy. A player, like him. Sure, people appreciated his service for their country, but no one wanted their daughters dating him, that was for damn sure. As he pulled away from the curb in a cloud of smoke and a squeal of tires, Adam felt more torn than he’d ever been in his life. He didn’t want to betray James, and he definitely didn’t want to hurt Mel. But she was doing this either way, becoming who she was meant to be. Whether he helped or not. She was safer with him, from that standpoint. He knew the rules.
Adam stopped at a red light and rubbed his face. At least he’d thought he knew them, but now he wasn’t so sure anymore. What scared him most was how far beyond a casual fling his feelings for Mel had already gone, without his knowledge or consent. Beyond her laugh or her smile. Beyond her killer body and her magnificent brain. Beyond the way she looked at him and the way she made him feel like he stood ten feet tall whenever they were together.
Lord above, she made him feel smart and respected and sexy, too.
He couldn’t remember the last time that had happened, if ever.
The light turned green and he sped forward, trying to keep it all in perspective. He’d rein in his heart now, and it would all be good. It wasn’t too late. It wasn’t love. He just wanted more time to appreciate this...this...whatever this was between them, before it was over. Somehow, the past week or so, Mel had gone past being James’s little sister and become a vivacious woman he wanted to know better. That was all.
And as much as Adam didn’t want anything messing up his friendship with James, he couldn’t let go of his connection with Mel. Not yet.
He’d keep it light, fun, because that’s the deal he’d made. Once this was over, he’d walk away, let her go.  Because that’s what she wanted. Because that’s what he’d promised. Because that’s the only way any of this would work out in the end.

USA Today Bestselling Author Traci Douglass writes fiction bursting with romance, usually mixed with a healthy portion of snark. Her stories feature sizzling heroes with quick wits and troubled pasts and smart, independent heroines who always give as good as they get. Her books are published with Harlequin/Mills & Boon, Entangled Publishing, and Tule Publishing. She’s an active member of Romance Writers of America (RWA), Indiana Romance Writers of America (IRWA), and the International Thriller Writers (ITW), and holds a Master of Fine Arts Degree in Writing Popular Fiction from Seton Hill University.