REVIEW: PROMISE ME YOU by MARINA ADAIR 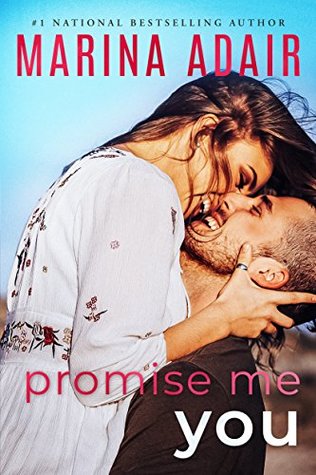 In Promise Me You (Raising Kane #1) by Marina Adair, Mackenzie Hart is in love with her best friend, Hunter Kane. Too bad he up and married someone else causing her to disappear from his life. Now three years later, they're reunited and Hunter is determined to convince Mackenzie to help him write songs for his upcoming album while making sure she doesn't disappear from his life again. Yet, the more time they spend together, the more Mackenzie finds herself falling for Hunter all over again when she knows she should keep her distance. Will Hunter be able to convince Mackenzie that she's the right woman for him or will their chance at happy ever after slip by again?

What an emotionally-charged, fast-paced, enchanting read Ms. Adair has delivered in this first book of her Raising Kane series where the main characters have quite the history and I could understand why the heroine is scared to face the hero after everything that's happened in her life and the secret she's kept from him for three years. How well will the hero deal once he learns the heroine's secret?

The way this story started had me feeling sorry for the heroine because there's nothing like feeling so scared about the future; a future where she feels no other option but to walk away from those that care about her in order to protect her heart and hide the truth about her future being so bleak. Will she be able to handle everything once Hunter comes back into her life? Moreover, both the characters are wonderful and I loved the hero's determination to win over the heroine because they've always been close -- until they weren't -- and he wants nothing more than to be with her.

With the main characters, I absolutely loved this couple. They've both had tough pasts that have made the resilient characters they are; characters whose emotions I felt alongside them, as they're reunited and the hero fights hard to get their friendship back to how it was and then make it so much more if only he can convince the heroine that she's the one he wants forever with. Furthermore, the heroine is resilient, courageous and I liked that she let the hero in because life hasn't been easy without him, especially when he's always been there for her. Why didn't the heroine trust him enough to tell him the truth of what was happening in her life? While the hero, he's confident, driven to succeed when it comes to the new album and I liked how determined he was to win the heroine over because he wants her back in his life, as his life hasn't been the same without her. I also liked the close relationship the hero has with many of the secondary characters and that they'd do anything to bring Mackenzie and Hunter together again.

Overall, Ms. Adair has delivered a fantastic read in this book where emotions run high; the chemistry between this couple was powerful; the romance was nicely-detailed and had me loving this couple together; and the ending had me cheering for this couple's happy ever after because they're meant to be together. I would recommend Promise Me You by Marina Adair, if you enjoy second chance romances, the friends to lovers trope or books by authors Jill Sanders, Catherine Bybee, Jill Shalvis and Melissa Foster.

A heartening romance of friendship, second chances, and the healing power of love…
Mackenzie Hart has made a career out of writing about eternal love, so when she finds her perfect match in Hunter Kane, she decides to put it all on the line. Irresistibly charming and drenched in alpha-male swagger, Hunter isn’t just the catch of the town—he’s Mackenzie’s best friend. Only someone beats her to the altar. After a fresh start and three years to recover, the last thing Mackenzie expects is for her old life to come knocking…
Recently divorced, musician Hunter Kane wants to reconnect with the woman he left behind. Admitting his biggest mistake comes first. What comes next is up to Mackenzie. He hopes she’ll give him a second chance. He may have been the one to break her heart, but he knows he can also be the one to mend it.
As a tenuous friendship turns into something more, Hunter’s life on the road beckons once again. Will love be enough to keep them together, or will their wildly different worlds be too much for them to overcome?
BUY LINK:  Amazon