REVIEW: ALL I WANT IS YOU by CANDACE HAVENS 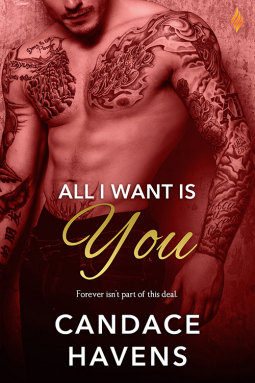 All I Want is You
By: Candace Havens
Releasing April 17th, 2017
Entangled Publishing: Brazen
+ Add to Goodreads

In All I Want is You by Candace Havens, finally fed up with the number of times his father has gotten married and concerned about losing the family business, Hawke Vance decides to take matters into his own hands by finding a suitable woman to marry. Who better to ask than the woman he finds skinny dipping in his pool? Except Hawke never imagined he'd fall in love with Amy Powell when they were only supposed to fake their relationship for two months until she left for another country. Can he convince her that he wants more than a marriage of convenience?

This is the first book I've read by Ms. Havens, and I've got to say that it won't be my last. Right from the beginning, this book was very entertaining, fast-paced and I was immediately intrigued by the hero. He's a man that likes things fast, isn't interested in relationships, and would do anything for his family. So, of course, I wanted to discover more about him. Why isn't he interested in happy ever after? How far is he willing to go for his family, especially when marrying someone is the last thing he wants? Will Amy leave or stay when it comes time to leave to continue following her dreams?

The dialogue was compelling, well-written and made this story a worthwhile read, because of the main characters back stories and their growing relationship. Amy is strong, brave, independent, and I could understand why she agreed to marry Hawke, even when marriage wasn't in her plans for her future. She'd do anything for family, and marrying the hero is the only way for her to get what she wants, because her only other option would come with too many strings. She's also kind, caring and I loved how she got along so well with Hawke's family and best friend. They tease each other like they've known each other for more than the short time they have.

While Hawke, he never imagined himself married because of his father's history with marriage, and it goes to show with how much he tries to fight falling in love with the heroine. Yet, in saying that, falling in love with her was inevitable and Amy is good for him. Not only because being with her would grant him the thing he wants most, but because she challenges him with the fact that she doesn't let him get away with anything he does. Especially the moment when he sends her a gift and it ends up backfiring. The joke was on him.

Overall, Ms. Havens delivered a wonderful read in this book where Hawke and Amy had plenty of chemistry, which spilled over onto the pages in hot sex scenes. The way this story ended had me wondering how Hawke could be such a jerk until he made things right between them. Didn't she deserve the benefit of the doubt? Furthermore, the epilogue wrapped this story up perfectly, as Amy's dreams came true and Hawke proved how romantic he can be. I would highly recommend this book, especially if you enjoy the marriage of convenience trope, the fake relationship trope or books by authors Rebecca Brooks, Gina L. Maxwell or Amy Andrews.

Hawke Vance will do whatever it takes to protect the family business, even if it means protecting it from his own father, a man who’s just gotten hitched in Vegas to wife number nine. Growing up seeing how much chaos wedded bliss creates, Hawke’s sworn never to fall into the matrimony trap. But to get the all-important controlling shares of the company, he does need a wife.
Being caught skinny dipping is not the way ballerina Amy Powell planned to start her vacation. When the hot biker who catches her turns out to be the owner of the house she’s staying in, she’s mortified. But embarrassment soon turns to confusion and a good dose of lust when Mr. Sex on a Stick offers her the money she needs to save her brother if she’ll agree to marry him and play pretend for two months.
Only this game of make-believe quickly starts feeling too real…
BUY LINK:  Amazon