REVIEW: SOMETHING OLD by MEGAN RYDER 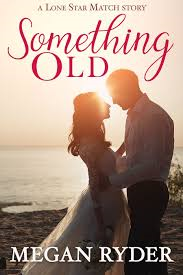 In Something Old (Lone Star Match #1) by Megan Ryder, Delaney Winters believed she did the right thing by breaking off her engagement to Ethan Van Owen when it was discovered her father was a criminal. But now, she finds herself back among her old friends; friends she hasn't seen in a while, for her best friend's wedding. Can she overcome the past to have a second chance with Ethan, or will history repeat itself and send Delaney running away from the man she still loves?

Ms. Ryder does it again by writing a spell-binding read that I found I got so wrapped up in that I was at the end of this book way sooner than I thought I'd be. The way this story began grabbed my attention immediately, and had me wanting to know more about the heroine. Why did she isolate herself from everyone that cared about her? Would going to this wedding help her heal from the hurts of her past, or tear them wide open again? But what I liked most about the beginning of this story is when the hero and heroine came face-to-face for the first time, because it's palpable they both still love each other, and yet, it's hard for Ethan to forgive and forget what Delaney did, and the only way he can is to discover why she broke up with him.

The dialogue was compelling, and I loved the matchmaking efforts by Delaney's best friend, because Ethan and Delaney weren't the only couple she was trying to help. Will Delaney's best friend be able to bring everyone together again, so they're as happy as she is with the man she's soon to marry? Moreover, the story was very intense and entertaining due to the main characters back stories and their relationship history. Can they really have a second chance after so much heartbreak? Then there's the heroine's past that made me feel sorry for her, because she blames herself for what her father had to do to support their family. How could she possibly believe it was her fault?

Both the main characters entertained me from start to finish with their banter, their back stories and their growing relationship. Will they reunite and get their second chance, or will people's judgment of Delaney's past have her running scared again and continue to keep them apart? The heroine is resilient, brave and I liked how she picked up the pieces of her life after her world was turned upside down. She did everything possible to help her mom get through the tough times, even when she was still being treated unfairly by those that she once considered friends. Furthermore, I felt sorry for her when it came to Ethan's family. His father and stepmother aren't above manipulating him to get what they want, which made it just as hard for the hero and heroine to be together. Why couldn't they realize that the only way Ethan would be happy was with Delaney?

While the hero, I absolutely loved him. Delaney broke his heart, which the secondary characters aren't afraid to remind him of, because they don't want to see him hurt again. But, at the same time, he hasn't stopped loving her, so it's hard for him to stay away. Can he win her back? What will he do to win her back? Will he be happy with the sacrifice he does make? Yet, what I liked most about the hero is how he helped the heroine whenever the going got tough with her old friends that talked about her behind her back or were snarky to her face. She so didn't deserve it. Not after so much time has passed, and Delaney has been trying to make things right.

Overall, Ms. Ryder has penned a fantastic book to begin this series, which was full of romantic moments that illustrated how much these two still loved each other and how they should fight for that love no matter what. The way this story ended had me cheering for this couple's happy ever after, because Ethan's dad finally did what was right for his son and then Delaney finally realized that she shouldn't allow anything to stop her from being with Ethan, especially not his father and step-mother. Luckily, she took advice from a secondary character she should probably dislike but found it hard to. I would recommend Something Old by Megan Ryder, if you enjoy second chance romances or books by authors Kate Hardy, Kelli Collins or Jeanne St. James.

BLURB:
Three Bridesmaids. Three lost loves. One matchmaking bride. With just a week before the wedding, can a bride-to-be reunite her bridesmaids with the ones who got away?

Delaney Winters never expected to see Ethan Van Owen again. He was part of a life she had left far behind… But now, with her best friend’s wedding coming up, it seems like her past has caught up to her. Forced to spend time with her former flame, Delaney’s feelings for him resurface, rekindling the white-hot passion that had always drawn them together.

For five years, Ethan has wondered what went wrong with their relationship. After Delaney broke up with him, Ethan moved to Texas Wine Country to start a new life. But now, he is being pressured to take up the mantle of his family investment business and return to Houston, Ethan must confront his past.

Can Delaney and Ethan bury their past to rekindle the love and passion they once shared?
Buy Link: Amazon