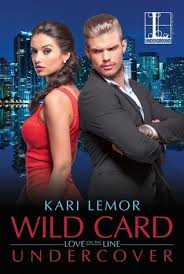 In Wild Card Undercover (Love on the Line #1) by Kari Lemor, offered the chance of a lifetime by FBI agent Christopher Shaunessy, Meg O'Hara isn't about to turn it down just because what they want her to do could be dangerous. Yet, the more time she spends with Chris on top of trying to find the information the FBI needs on her boss, the more Meg finds herself getting in deeper and doing things she wouldn't normally do to be free. Will Chris be able to protect her before her involvement with the FBI is discovered, or will her chance at being reunited with her family never happen?

I love romantic suspense, so the blurb of this book alone appealed to me, but together with the cover I just had to read this story. From start to finish, this book was very engaging, fast-paced and had me hooked immediately by what Meg is going through. Why is she trying to avoid discovery by someone? How will she get herself out of trouble? Yet, what I enjoyed most about the start was what the hero did for her. She needs someone on her side, because her life recently hasn't been easy, and she's doing the best she can to make things right.

As for the dialogue, I was really intrigued by the heroine's back story. She's gotten herself into trouble, and it's palpable she's not getting out of it any time soon, if she doesn't take the FBI's offer. Her boss likes her a little too much and no way will he let her go. Indeed, he's a creep; a man that exerts his power over those he wants to, which is proven by what happens to Meg's friend when she didn't do something that the boss wanted her to. However, the dialogue wasn't all intense. There were some light-hearted moments between the hero and heroine that had me smiling, as Meg is strong, brave and I liked how determined she was to take her boss down and wouldn't give up, even when it seemed things were becoming too dangerous. Yet, in saying that, I did get a little annoyed by the hero's use of the word sweetie.

While the hero, his past haunts him and he doesn't want Meg to end up the same way as the last people that tried to help him, so he'll do whatever it takes to protect her, because he knows how dangerous things could get if they're not careful. He's also smart, confident and I liked how protective he was of the heroine as they begin to try to uncover information the FBI needed to take down Meg's boss. But what I liked most about the hero is what he does for Meg when it comes to her family, as she's worried what she'll face when she finally sees them again.

Overall, Ms. Lemor has penned a really enjoyable read in this book, which kept me entertained from start to finish with its romance and suspense. Where would the investigation into the heroine's boss take them? Would the hero finally succumb to their strong chemistry or remain true to his job as an agent by not getting involved with his informant? The way this story ended had me on the edge-of-my-seat due to what happens to the main characters. Will they be able to get themselves out of the sticky situation they find themselves in? How far will they go to keep the other safe? However, it was the last chapter that wrapped this story up perfectly, because of what the hero does for the heroine and then the way he surprises her. Who knew a snowman could come in handy? What made the hero finally realize that being alone for the rest of his life isn't the way to live? I would recommend Wild Card Undercover, if you enjoy romantic suspense or the sexy protector trope.

BLURB:
All that glitters in Miami is not gold . . .

Lured in by a bad ex-boyfriend and the moonlight of Miami, Meg O’Hara is trapped in a nightmare situation, waiting tables for a crime boss and fearing for her life. When undercover FBI agent Christopher Shaunessy offers her a way out, she seizes it. Getting the goods on Salazar Moreno might not be easy, but she’ll do anything to be freed from her servitude and Moreno’s sexual advances, even if it means moving in with the charismatic agent.

Chris Shaunessy pretends to be Meg’s lover in order to keep her safe, but he steels his heart against further involvement. Passion has no place in the sordid world of organized crime. And yet, the closer they get to cracking the case, the stronger his feelings for the spirited waitress shine. It’s a dangerous game he’s playing, and taking Meg in his arms for real could prove a fatal misstep . . .
BUY LINK:  Amazon