REVIEW: BACK TO YOUR LOVE by KIANNA ALEXANDER 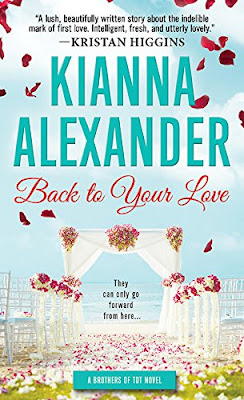 Back to Your Love
Brothers of TDT #1
By: Kianna Alexander
Releasing April 4th, 2017
Sourcebooks Casablanca
+ Add to Goodreads

In Back to Your Love (Brothers of TDT #1) by Kianna Alexander, Xavier Whitted and Imani Grant were high school sweethearts, until Xavier broke Imani's heart. But now years later, Xavier wants a second chance and he's not about to give up on winning Imani back, no matter how much she tries to push him away. However, when Imani's past threatens to derail Xavier's future prospect as a candidate in the race to win the city council seat, will Xavier trust in their love or will he crush Imani's heart all over again?
This is the first book I've read by Ms. Alexander, and I've got to say that it was a captivating, fast-paced read that entertained me from start to finish, because this a second chance romance story about high school sweethearts that find their way back to each other. Right from the beginning, this story had me hooked due to Imani being blind-sided by Xavier coming back in to her life. She wasn't expecting it, and she doesn't know whether she can give him another chance or not. Not with what happened in her past that left her ashamed to tell anyone about.
Both the main characters were riveting, but it was the secondary characters in Xavier's college mates that really added that extra something to this story. They're a bunch of smart guys that have really made something of themselves, and they're really close and would do anything for each other, which is proven by what they do for Xavier when they don't think he's making the right decision when it comes to winning Imani back. Then there's Imani's cousin; a woman who would do anything for Imani, especially when the heroine is struggling with the obstacles she has to overcome, if she's to have a second chance at happiness. Obstacles such as what happens to her clinic, telling Xavier about what happened to her in the past and dealing with the aftermath of Xavier's reaction to those situations.
As for the heroine, she's strong, brave and has overcome so much to get to where she is in her life. The obstacles she faces aren't easy, and I could understand why she was so hesitant to give Xavier a chance in the beginning, because of what happened to her in the past. Knowing that she has to tell him before he learns the truth in the worst way possible; a way that will put his prospect of winning the city council seat he's going for in jeopardy.
While Xavier, he's hard-working, kind, caring and does a lot of good in the community. What he does for Imani when things happen at her work proves he will do anything for the woman he loves, no matter whether her words hurt him when it comes to the kids he helps. However, I thought he was being a bit unfair to the heroine when the truth about her past was exposed, especially considering he didn't have all the facts. Why would she have reason to lie about what happened to her?
Overall, Ms. Alexander has penned a really good read in this story, encompassing a wonderful second chance romance, great secondary characters that I can't wait to read more about and two main characters that are a meant-to-be couple. The way this story ended had me cheering for this couple's happy ever after, because Xavier's friends are the type of friends any guy would be lucky to have. Who knew they could be so persistent and wily when it came to convincing the heroine to do what they want her to do to make things right with the hero? However, it was the epilogue that wrapped this story up wonderfully, because no one could love the heroine more than the hero, and the surprise he has for her certainly proves that. I would recommend Back to Your Love by Kianna Alexander, if you enjoy second chance romances.
OVERALL RATING:

BLURB:
First in a mainstream contemporary romance series featuring successful, tight-knit former fraternity brothers from Kianna Alexander.
What would you give for a second chance?
Xavier Whitted has a lot on his plate. As a hardworking businessman, mentor to troubled teens, and aspiring politician in his Southern hometown, the daily demands never let up. A weekend at the beach for his best friend's wedding is exactly what he needs. What he doesn't need is to run into the woman who broke his heart ten years ago.
Imani Grant is more beautiful, confident and intelligent than ever, and their connection is still sizzling. But Imani harbors a secret that could destroy both their blossoming careers. She knows she has to keep her distance, but Xavier is determined to win back her heart—consequences be damned.
BUY LINK:  Amazon