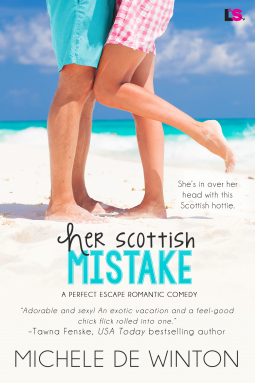 In Her Scottish Mistake by Michele De Winton, after her boyfriend cheated on her and then became engaged to her best friend, Janie Milan needed to escape her hometown for a little while. So, she decided to travel to Thailand where she was going to have the trip of a lifetime, which she does when she meets Blaine Galloway. Except he's in Thailand hiding from the press and when she finds he's lied to her about his identity, will she continue to spend time with him or will they go their separate ways due to press harassment and lose their chance at happy ever after?
What a fun, sexy read Ms. De Winton has penned in this story, encompassing a heroine on the trip of a lifetime to avoid a wedding she was invited to but has no intention of attending and a hero trying to avoid attracting attention from the paparazzi because of a deal he made to keep his brother safe. The way this story started had me sympathizing with the hero due to the deal he made to keep his brother out of trouble; a deal he had no choice but to make because he would do anything for his brother. Yet, what I liked most about the first chapter is the moment where the hero and heroine meet. Poor Blaine with what Janie does to him and then trying to fend off her wandering hands.

The dialogue was intense due to the main characters back stories and all that happens on their journey to happy ever after, especially with what the paparazzi does to them. However, there were also some really amusing light-hearted moments where the heroine compares things to items back home such as pop's tractor or her job working with snakes. Then there's also the playful dialogue between the main characters that had me smiling. Janie wants an adventure, and she certainly gets one with everything she goes through with Blaine.

Janie has every reason not to trust men after what her ex did, but still there's something about Blaine that she can't resist, even when he's lying to her. She's also strong and brave by going on her dream adventure and the way she isn't afraid to voice her opinion to those that are determined to make her out to be some sort of bad choice for Blaine when certain things are revealed about her by people she thought she could trust. In fact, I really liked that she didn't run away when her life got turned upside down and instead faced it head on courageously.

Overall, this was a wonderful book filled with plenty of moments that made me smile; where the secondary characters gave really good advice to the main characters, so they didn't let their chance at happy ever after slip away; and where the romance kept me entertained, because the heroine was so unsure of herself when it came to the hero and whether he could see her as more than just someone he met and could spend time with without them having ulterior motives. The way this story ended was delightful, as Blaine went to great lengths to make things right with Janie by declaring his feelings and apologizing to her in a very public manner. What a guy! I would recommend Her Scottish Mistake by Michele De Winton, if you enjoy the opposites attract trope or the mistaken identity trope.

Aspiring blogger Janie Milan is finally on her dream trip to Thailand. But when an unfortunate piña colada incident lands her in the path of a hot Scotsman, Janie finds herself dying to find out what's under his kilt. Only the frustratingly sexy man isn't who he's pretending to be…

After cutting a deal to keep his brother safe, Scottish heartthrob Blaine Galloway is hiding from the press. But his secret identity starts to slip the second he meets small-town blogger, Janie. Now the press is hot on their heels and Blaine’s life is tumbling into a tabloid-sponsored hell. Coincidence? He’s not so sure.
BUY LINK:  Amazon