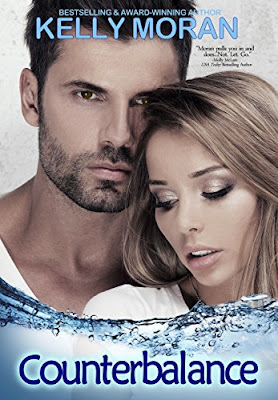 In Counterbalance by Kelly Moran, Xavier Gaines needs someone to help him be less awkward in social situations and help him find a way to handle the public limelight that he's sure to land himself in once he signs the government contract his software company has landed. There's only one person he trusts for the job -- Peyton Smoke. Can she help him while keeping their relationship strictly professional, or will Xavier fall for the one woman off limits to him because they work together?

What happens when a beauty comes face-to-face with a geek years after they went to High School together? Another incredible read by Ms. Moran, which enthralled me from start to finish with its well-written dialogue, fast-paced plot, a sexy alpha hero that really grows throughout this story, a wonderful heroine that has suffered several losses and needs to realize that not everyone will abandon her, and secondary characters that I enjoyed just as much as the main ones. The way this story started drew me in to this story immediately, as Xavier desperately needs Peyton's help. Since it seems even his employees fear him a little from what they call him.

As for the dialogue, it was compelling, well-written and I loved the banter between Peyton and  Xavier as well as between the main characters and the secondary ones. There was sarcasm and plenty of moments where I smiled, yet there were also moments where I wanted to cry. The reaction of Xavier's parents when he tells them some personal news and the person responsible for making threats towards one of the main characters took me by surprise. Why would Xavier's parents assume that he and Peyton were more than friends? Why did someone Xavier thought could be trusted threaten Peyton? Moreover, I really liked the banter between Peyton and some of the secondary characters. She excels as the Public Relations Director for Gaines Industries, and isn't afraid to use her feminine charms such a little flirting to get what she wants to help dispel Xavier's unflattering image with the media.

The main characters back stories were riveting, and I could sympathize with both of them in various moments throughout this story. Peyton has serious abandonment issues and I could understand why because she's lost everyone she loves such as her parents to an accident, her brother to war, and her fiancé to personal reasons. How much loss does one woman have to deal with before she says enough is enough? Can she overcome her fears to find happiness with Xavier? However, the heroine is also strong and brave because she's been able to pick up the pieces and move on from those devastating losses to get to where she is in her life.

While Xavier, he really grows throughout this story. For a socially awkward geek at the start, he certainly arises to the occasion in facing the media when a situation needs dealing with. Furthermore, I liked the close friendship he had with his bodyguard, Joseph, because the man wasn't afraid to give his opinion to Xavier or Peyton, as he cares about them both and wants them to be happy. Then there's the growing friendship between Xavier and Kate, Peyton's best friend. They're enemies at first, but once Kate begins to see how much the hero cares for the heroine, she mellows enough to help Xavier make Peyton see that they're meant to be together.

Overall, Ms. Moran has penned a worthwhile read in this book where the strong chemistry between Xavier and Peyton spills over onto the pages in passionate moments that showcased their chemistry really well. The way this story ended had me cheering for this couple's happy ever after, because Peyton needed Xavier just as much as he needed her to be happy. However, what I liked most about the ending was the reactions by everyone to Xavier's question for Peyton. Certainly, Joseph knows how to distract Kate from taunting Xavier and his mother is eager to get to work planning. I would highly recommend Counterbalance, especially if you like the friends to lovers trope or books by authors MacKenzie Crowne, Erin Nicholas or Jill Sanders.

BLURB:
She’s a beauty, but he’s just a geek.
The world might think billionaire Xavier Gaines has it all, but he’s got a big problem. His successful software company is about to sign a government contract that’ll land him smack in the glare of the public limelight, and his lifelong battle with social anxiety has marked him as a cold, uncaring bastard in the eyes of the press. To dispel the unflattering image, he needs help, and there’s only one person he trusts with the job—Peyton Smoke. Gorgeous, kind, and funny, she agrees to be his media relations director and soon imbeds herself so deeply in his life, his world will crumble if anything upsets the balance. He cannot screw up their solid unit. No matter how achingly he desires her. Yet, how is he supposed to resist when she tugs emotions from him he didn’t think he was capable of experiencing? Especially since it appears he’s not the only one fighting their undeniable attraction.

Ever-after just might be possible...if he can convince her to believe in love again.

Peyton Smoke is looking for a change, and working at Gaines Industries has given her the boost she needs to fill the empty void in her life. Xavier is the perfect boss. Under his seemingly callous, frigid demeanor lies a compassionate man who cares about causes and those precious few he lets into his inner circle. What she wasn’t prepared for is the smoldering passion suddenly flaring between them, nor the hot-as-sin alpha side beneath the layer of sexy nerd. Getting involved with him puts more than her job at risk. She’s been trampled one too many times, and she vowed never to leave herself vulnerable again. But the heart wants what the heart wants. If only she can figure out whether his feelings are genuine or if this is a mistaken case of gratitude wrapped in lust, then their shot at forever may not seem like such a fruitless hope.
BUY LINK:  Amazon
at 21:59