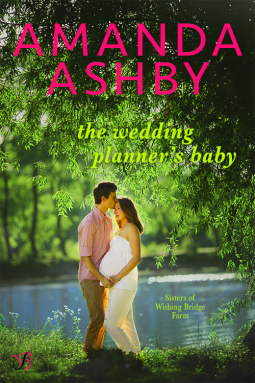 In The Wedding Planner's Baby (Sisters of Wishing Bridge Farm #2) by Amanda Ashby, Bec Watson never thought she'd return home to Wishing Bridge Farm, the place she inherited along with her sisters after their Aunt died. But learning that the man whose baby she's now carrying lied about who he really is, the only choice to make was to return home. Working as a wedding planner keeps her busy, but when Lincoln Mathews comes back into her life and asks her to plan a wedding, just so she'll give him a chance to explain everything, she's torn between saying yes and telling him to get lost.
Lincoln Mathews is a man torn between family and the woman who stole his heart. When he discovers Bec is pregnant, he's determined to do everything in his power to win her back. Except nothing is as simple as he thought it would be, and if the only way he can get Bec to talk to him is to ask her to plan a wedding, then that's what he'll do. But when it seems Lincoln might not be able to help his family break free of their troubles, what will he choose -- his future with Bec or doing what his mother wants him to do?
The first book of this series was a wonderful read, which introduced readers to Bec and her free-spirited personality, so I was really looking forward to reading her story, and I've got to say that I loved it. The way this story started grabbed my attention immediately, as I wanted to know whether Bec believed in the Wishing Bridge. Did it really grant the wishes people made? Yet, what I enjoyed most about chapter one is the moment where Bec is forced to face Lincoln because of one very annoying sister that has an opinion on everything whether its warranted or not.

As for the dialogue, it was intense due to the main characters back stories and the history these two have that made Bec run from Lincoln without so much as a goodbye. Why couldn't the hero have been honest about who he really is? Throughout Lincoln has some tough decisions to make, and I could understand why he had such a tough time choosing between his family and Bec. He's always been the responsible one, the one -- it seems -- to solve the family problems, and if he can't, he'll have to live with the guilt that he failed and that isn't an option. However, nor is what his mother wants him to do, and I'm glad that he finally stood up to her the way he did. Who cares how they get the family out of trouble as long as they do?

While Bec, she didn't have it easy growing up and believing she never really fit in where she and her sisters ended up after their parents died and it's understandable why she isn't fond of Wishing Bridge Farm. However, in saying that, I liked how one of her sisters proved her wrong and found a way to show her that love is worth fighting for. Also, Bec too, has a few decisions to make. Should she give Lincoln a chance? What will happen when he has to choose between her and his family? Will he make the right decision, or will Bec make the decision for him? Especially when she realizes that he'll always be torn between his love for her and his responsibility to his family.

Overall, Ms. Ashby has penned a sweet, captivating read in this second book of her Sisters of Wishing Bridge Farm series, which has me looking forward to Pepper's book, as there's something she's hiding from her sisters. The way this story ended took me totally by surprise with the couple that got married. However, it was the epilogue that wrapped this story up perfectly, because of everything Bec and Lincoln talk about. She really is good for the Mathews family. I would recommend The Wedding Planner's Baby by Amanda Ashby, if you enjoy the surprise pregnancy trope or if you enjoy books by authors Victoria James, Jennifer Shirk or Sonya Weiss.

BLURB:
Free-spirited Bec Watson was never having children­––until she is. No way she’s ready for this, and she’s not going to tie-down the father, not even (especially!) if he’s secretly an English Lord. She’s doing this solo, which means she needs help from the one place she swore she’d never return…Wishing Bridge Farm. Home.

Lincoln Mathews has never known love, only responsibility. And now his family home and business is at jeopardy unless he finds a solution. Fast. Their idea? Marry for money. But the girl who stole his heart is carrying their child. His first mission? Follow her to Wishing Bridge Farm. But soon he’ll have to choose between duty to his relatives and love for the real family he never thought he could have.
BUY LINK: Amazon