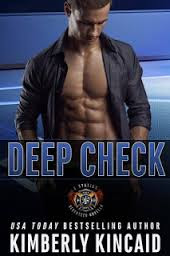 In Deep Check (Hot on Ice Romance Anthology) by Kimberly Kincaid, January Sinclair and Finnegan 'Finn' Donnelly were once best friends until the death of their other friend tore them apart. Now years later, Finnegan has achieved the ultimate goal of winning the cup with his ice hockey team and is returning home for a little while during the off-season. Can he repair his friendship with January, so they can have the happy ever after they both deserve?
This is one of eighteen stories in the Hot on Ice Hockey Anthology, each encompassing a hero from The New Orleans Cajun Rage, the team that have won the Cup this season and I've got to say as usual Ms. Kincaid delivered a wonderful read that took me hardly any time to finish. The way this story begins with the prologue had me wondering whether Finn would be able to make things right with January, especially after their conversation when they first come face-to-face in this story. He let her down badly when he left town without so much as a backward glance and causing January to suffer double the lose with both he and Asher, their other friend gone.
As for the dialogue, it was well-written and I loved every moment the hero and heroine conversed, especially whenever Finn called January by the nickname he has for her. It's cute and suits her, considering her name is a month. However, in saying that, there are moments where I felt sorry for the hero and heroine. Finn thought he was doing the right thing by trying to honor his friend's memory by following his hockey dreams, but it lost him the only other friend that ever mattered to him. Will January be able forgive him? Will the pair find a way to be together when he lives in New Orleans and she lives in Remington? Especially considering they have such intense chemistry and strong feelings for each other, which eventually spills over onto the pages in sizzling hot sex scenes that illustrate how right these two are for each other and that they shouldn't let anything stand in the way of being together.
Both the main characters as well as the secondary ones drew me in to this story with their dialogue and the way January's friends support and help her. The firefighters and those that work in the firehouse are a family, and would do anything for each other, which is proven by what they do to help January and Finn. No one wants to see the heroine get hurt and I liked how the secondary characters aren't afraid to give the hero advice in making sure that doesn't happen.
January is strong, brave, smart and I liked how passionate she was about her job and making sure the firefighters she works alongside are as safe as can be on the job. Certainly, she goes above and beyond in making the fundraiser she organizing a success, and she's lucky to have so much help from Finn and people he knows. While Finn, he's successful and done well for himself by achieving everything he set out to achieve. Being in Remington holds bad memories, yet it also holds some good ones. Getting close with January again and finally being able to explore their feelings without anyone getting hurt is a good thing, but when he's trying so hard to remain a part of the New Orleans Cajun Rage, I couldn't help but feel sorry for him. Because he was torn between going back to New Orleans to continue playing the game he loves for the team he wants to or choosing to stay in Remington to be with January. The question is -- Which one will he choose and will it be the right decision for him and January?
Overall, Ms. Kincaid has penned a delightful read in this novella, encompassing well-written dialogue, a fantastic array of secondary characters and a couple that definitely deserve happy ever after. The way this story ended was perfect, as January has wonderful friends that want her to be happy and aren't afraid to interfere to make sure Finn doesn't make the mistake of letting January go a second time. I would recommend Deep Check by Kimberly Kincaid, if you enjoy the friends to lovers trope or have read Skin Deep by Ms. Kincaid, because this novella features several Station Seventeen characters. 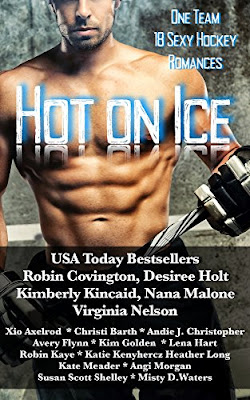 18 brand new sexy stories from bestselling authors, each one too steamy for the penalty box . . .

20% of royalties from sales of Hot on Ice will go to Homes for our Troops, a charity that builds specially modified homes for injured veterans.

Get ready to fall in love with the smokin' hot hockey players of the New Orleans Cajun Rage. After this season's Cinderella run all the way to the Finals, these heroes have won the Cup--and now your heart is the goal.

FREE AGENT, USA Today Best Seller Robin Covington - Finally out, he thought he knew his next step . . . until the man he might not be able to resist puts a sexy offer on the table.

BODY CHECK, USA Today Bestseller Desiree Holt - The Cup, the girl, and the future-could he make them all come together?

DEEP CHECK, USA Today Bestseller Kimberly Kincaid - There's no such thing as in too deep...

CAGED, USA Today Bestseller Virginia Nelson - She plans to melt the ice king's heart and prove she's just the girl to go skate to skate with him, whether he likes it or not.

THE WARM UP, Xio Axelrod - Toss a stoic defenseman, a no-nonsense nurse, and a ward full of crafty children in a Cup and anything can happen.

CHECK MY HEART, Christi Barth - The only thing that will make him happy again is the one woman he can't have . . .


FULL CONTACT, Andie J. Christopher - This player has a bounty on his virginity. She has him up against the boards.

BLADE, Avery Flynn - Sometimes the line between love and insanity is as thin as an ice skate's blade.
UNDER THE MIDNIGHT SUN, Kim Golden - When it comes to the game of love, he's playing to win.

COURAGE, Lena Hart - This hot-tempered coach is fully prepared to fight for his wife--but can he win back her heart?
PENALTY BOX BLUES, Robin Kaye - The only woman who knows his secret can slam his heart against the boards with a sideways glance. He is so pucked.

BEAR NAKED, Katie Kenyhercz - When he sets his sights on a goal, it's only a matter of time.
IN SKATES TROUBLE, Kate Meader - Can a passion that started in the dark find a lifetime of love in the light?
MAKING HIS MOVE, Susan Scott Shelley - Making impossible saves is easy compared to falling in love.