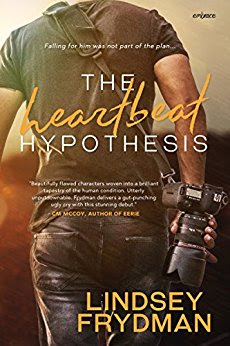 In The Heartbeat Hypothesis by Lindsey Frydman, Audra Madison knows she's lucky to have gotten a second chance at life when she received Emily Cavanaugh's heart. Now she's determined not to let anything stand in her way of living life to the fullest and creating memories that Emily should have been experiencing. But first she needs someone to chronicle her journey and there's no one she'd rather want by her side than Jake Cavanaugh. He's a photographer and just happens to be Emily's brother. But when secrets from the past start to unravel and Audra finds herself unable to stop from wanting to help Jake discover the truth of what happened to his sister once and for all, will she lose the man she's falling in love with?

I'm not usually one to read New Adult Romance unless I really like the blurb, which I did for this book, so I'm glad I chose to read it as it was a delightful read full of plot twists that made me sympathize with everything Audra goes through that shows her life's too short. Right from the beginning, this story immediately drew me in because of what the heroine is going through and what she wants to do to honor the life of the teenage girl whose heart Audra ended up with to save her life.

The dialogue was intense due to the heroine's back story, believing she was going to die until she received a heart transplant. However, it was plot twists in what happens to Audra and what happens to the heroine's best friend that made this story a real page turner for me, even if they did make me cry. How much does the heroine have to endure before she finds happiness? Will she be able to help Jake overcome his past by finding the truth of what happened to his sister? Yet, there were also some light-hearted moments throughout this story that made me smile. Audra is good for Jake. She's the one person he can completely open up to about his past, which was needed to help him heal.

Both Audra and Jake were fantastic characters, and I loved every moment they conversed whether Jake was being friendly towards the heroine or whether he was being a complete jerk. Audra is strong and brave when it comes to everything she goes through and I liked that she didn't give up on Jake in the moments where he tried to push her away, because he believed he wasn't good enough to be her friend let alone anything else. Indeed, she's a fighter when it comes to her condition, dealing with her grief and showing Jake that he's not alone. That she's there for him, if he'll let her in. While Jake, he's been through so much and losing his sister was hard. He hasn't dealt with his grief and has closed himself off from getting close to people, yet Audra manages to break through his walls. And really, I was cheering for her every step of the way because Jake needed her.

Overall, Ms. Frydman has penned a fantastic read in this debut book, which was filled with plenty of emotion that I felt along with the characters, especially the heroine. The way this story ended had me worried due to Jake's reaction to what Audra does when it comes to trying to find the answers he wants, but I was glad he made things right between them. Besides, what Audra did and what it led to helped him find some peace to his past in the end, which he desperately needed and deserved because of what he believed really happened to his sister. I would recommend The Heartbeat Hypothesis by Lindsey Frydman, if you're looking to read your very first New Adult Romance, or if you enjoy books by authors Sophia Henry, Ophelia London or Jennifer Blackwood.

BLURB:
Audra Madison simply wanted to walk in the shoes of Emily Cavanaugh, a free-spirited teenager who died too young. After all, Audra wasn’t supposed to be here.

Thanks to Emily, Audra has a second chance at life. She’s doing all the things that seemed impossible just two years ago: Go to college. Date. Stargaze in the Rocky Mountains. Maybe get a tattoo. You know, live.

Jake Cavanaugh, a photographer with mysterious, brooding gray eyes, agrees to help chronicle her newfound experiences. She makes him laugh, one of the only people who can these days. As they delve into each other’s pasts – and secrets – the closer they become.

But she’s guarded and feels like she can’t trust anyone, including herself.

And he’s struggling with the fact that his beloved sister’s heart beats inside her.