Enter to Win a Print Set of RESCUING THE BAD BOY
and RETURN OF THE BAD BOY, along with a $10 Starbucks Gift Card 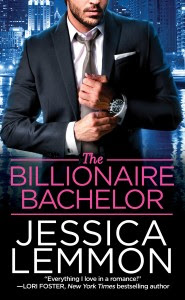 In The Billionaire Bachelor (Billionaire Bad Boys #1) by Jessica Lemmon, Reese Crane wants nothing more than to be CEO of Crane Hotels, but it doesn't seem the board of directors will vote in his favor. Even though he spends endless hours working, they can't seem to look past his relationship history. The only way to get what he wants is to offer Merina Van Heusen the one thing she wants -- her family hotel back in exchange for becoming his wife for six months to clean up his image and prove to the board he can commit to something important.
Ms. Lemmon just keeps getting better and better, and this first book in a new series for her proves that with how entertaining it was and the fact it encompasses the marriage of convenience trope. Right from the beginning, this story drew me in immediately with Merina being hit hard by what her mother reveals about the family hotel. However, it was the moment that Merina confronted Reese that made this book riveting, fast-paced and a complete page turner because the heroine isn't afraid to challenge the hero. I doubt anyone ever talks to him the way she did the first time they come face-to-face.
The dialogue was intense due to the main characters back stories, because neither have had the best of luck with relationships. Both have been betrayed by those they really cared about, and it's made them wary of getting involved with someone again. However, there were some really good light-hearted moments that had me laughing or smiling. Indeed, Merina impressed me with the way she handled Reese's ex.
Both Merina and Reese were absolutely fantastic characters, which I couldn't get enough of. Their growing relationship definitely has its ups and downs, yet they both handle things the best they can, despite the fact that it isn't easy for either of them. The heroine is strong, brave, and I liked that she would do anything to acquire back her family's hotel. Even knowing that marrying Reese could end in disaster or end up being the best thing that happened to her, if she could convince Reese that he deserved to be happy. I also liked how she handles the situations thrown her direction such as the press following the couple, interacting with  different directors of the board, the family get togethers and his ex. While Reese, he faces quite a challenge not only with Merina but with the board of directors. However, he's more than up to the challenge because when he wants something, he'll stop at nothing to get it. He's quite ruthless the way he pushes Merina into accepting his proposal until there's no way she can't because she really wants her family's hotel back.
Hot sex scenes heat up this story, and prove how good these two are together. They have such strong chemistry, and although they're both adamant that their marriage will be strictly platonic, they can't seem to stay away from each other. Reese hasn't had a long term relationship since he was betrayed by a woman he loved, yet I liked the fact that there was something about Merina that he couldn't resist. Besides, he knows she's different because she's also known betrayal at the hand of an ex.
Overall, Ms. Lemmon just keeps getting better and better with her writing, and this book definitely has me looking forward to more from the Crane Brothers. Tag, Reese's brother, was an absolute charmer and I liked how he kept Merina from doing something she'd regret at a critical moment in this story. The way this story ended was perfect, as Reese needed to do some serious groveling to win Merina back and I loved the words he said to her. I would recommend The Billionaire Bachelor by Jessica Lemmon, if you enjoy the marriage of convenience trope, billionaire heroes, or a heroine willing to do anything for her family.
OVERALL RATING:

Indecent Proposal
Manwhore. That's what the board of directors-and the tabloids-thinks of billionaire bachelor Reese Crane. Ordinarily he couldn't care less, but his playboy past is preventing the board from naming him CEO of Crane Hotels. Nothing-and no one-will keep him from his life's legacy. They want a settled man to lead the company? Then that's exactly what he'll give them.
Merina Van Heusen will do anything to get her parents' funky boutique hotel back-even marry cold-as-ice-but-sexy-as-hell Reese Crane. It's a simple business contract-six months of marriage, absolute secrecy, and the Van Heusen is all hers again. But when sparks fly between them, their passion quickly moves from the boardroom to the bedroom. And soon Merina is living her worst nightmare: falling in love with her husband . . .