REVIEW & GIVEAWAY: BETTING ON THE WRONG BROTHER by CATHRYN FOX 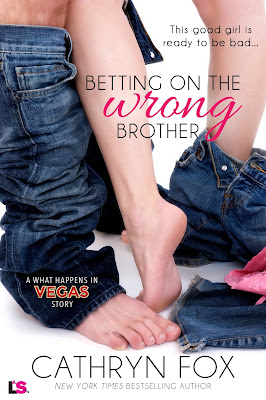 Betting on the Wrong Brother
A What Happens in Vegas Story
By: Cathryn Fox
Releasing February 8, 2016
Entangled Lovestruck
+Add to Goodreads

In Betting on the Wrong Brother (A What Happens in Vegas story) by Cathryn Fox, being caught naked by her teen crush, Nolan Wheeler, wasn't what Andi Palmer needed, not after having been trapped in an elevator. Even worse, the gorgeous man doesn't recognize her and gives her a fake name. Having been rejected by him in the past, she decides it's time for a little payback. However, her plan to seduce him may just backfire.
Ryan Wheeler can't believe the beautiful woman he's just caught getting undressed in an elevator. She seems familiar to him, and so does her name. Yet, he can't place where he knows her from. However, there's one thing that he does know and that is that he wants to get to know her better. If she's willing, there's no way he'll say no. Even if he's keeping a secret that could tear their new found happiness apart.
Having read a lot of the books Ms. Fox has written, I've got to say that this was one of her best. It was captivating, fast-paced and although I'm not a fan of the revenge trope, it was fantastic from the very beginning, as Andi finds herself in an embarrassing situation.
As for the dialogue, it was well-written and kept me entertained with Andi's plans for revenge as well as the fact that Ryan is deceiving her because he doesn't want to lose the chance to see if they have a future together. The teasing banter between them had me laughing at times. However, the dialogue was also intense due to Ryan's secret ruining everything if Andi learns the truth, and the history Andi has with Ryan's brother that has made it hard for her to trust men.
I really liked both the main and secondary characters. Andi is strong, brave, tenacious. I loved her first idea for revenge. The way she puts Ryan into his own embarrassing situation by making him do something he wouldn't ever normally do. It had me grinning, and I couldn't wait to read more of what she had planned for him. While Ryan, he's really made something of himself, considering he had so much trouble with literacy when he was younger. His success as a writer proves that. However, in saying that, I didn't enjoy him omitting the truth about who he really was to Andi, knowing that at any moment it could backfire on him and ruin any chance of the future he eventually wanted with her.
Scorching sex scenes heat up the pages, and do justice to their intense chemistry. The fact that Andi thinks Ryan is his brother, Nolan, definitely makes things interesting, because Nolan and Andi have quite a history. He rejected her advances when they were younger, and now she wants payback not only for that but the fact that he doesn't remember her and gives her a fake name.
Overall, this was a really good book where I enjoyed the secondary characters almost as much as the main ones. Especially one of Andi's fellow romance writers who added plenty of fun moments to the story when she was questioning the heroine about Ryan. The fallout from Ryan's lie made things hard to repair, since Andi doesn't trust easily to start with. Yet, the lengths he went to in  winning her back made me like the hero even more than I already did. I would highly recommend Betting on the Wrong Brother by Cathryn Fox, especially if you enjoy the revenge trope.
OVERALL RATING:

He may be at a romance readers’ convention, but a naked woman in the elevator is not what horror writer Ryan Wheeler expects. Now he can’t take his eyes off of her—and not just because he saw her naked, though her luscious curves certainly aren’t helping the matter. She’s beautiful, funny, snarky…and a complication he doesn’t need.

Running into her teen heartthrob while naked wasn’t exactly part of romance novelist Andi Palmer’s weekend plans. Worse, he doesn’t recognize her and gives her a fake name­. Years ago, he shot her down in the worst possible way, and now this? It’s time for a little down-and-dirty revenge.
Ryan’s more than a little turned on by this good girl who wants to be bad. But things aren’t what they seem, and the secrets they’re keeping from one another might just end this sexy little rendezvous before it ever begins….
BUY LINKS: Amazon / B & N / iTunes / Kobo

Quiet as a church mouse, her hands slowly moved to her buttons. Maybe she could get dressed before he turned.
He turned.
Frig.
His eyes latched on hers. Then grew wider. The ocean blue turbulence she’d once lost herself in dropped to her cleavage, then lower, over her midriff to her panties. Was that a smirk? Bastard. Okay, so apparently bad things came in fives.
“Uh, sorry.” His gaze shot back up and he cleared his throat. He set his duffle bag on the floor and shook his phone like it was some pithy excuse. “I didn’t realize you were there.”
Andi’s molars snapped together. Of course he didn’t. Why would he? After all, when it came right down to it, she was insignificant, wasn’t she?  Determined to keep the upper hand on this less than thrilling encounter, she unclamped her teeth and held her finger up, drawing a circle in the air. “You think you could turn around?”
“Oh. Yeah, sure.”
She stood tall—well as tall as she could at five foot five—and planted her hands on her hips like getting changed in an elevator was something she did every day. “Today?”
He smiled, flashing perfect white teeth. “Right,” he said, his friendly smile shifting to apologetic. Instead of turning, his glance flicked over her a second time. A gentleman, he was not. His lips twitched, the look on his face morphing into an appreciative smile. Score one for the granny panties. Still, it didn’t make her hate him any less.
He leaned to his left just as the elevator jumped again. It came to an abrupt halt and she lurched forward. Her body hit Nolan’s and the two toppled like bowling pins. A breathless, undignified oomph rushed from her lips as she landed on top of the main reason she’d left their hometown of Cedar Point eight years ago. The motor kicked in again, and the box continued to bob up and down. Her body moved right along with it, bouncing on top of Nolan like a goddamn Mexican jumping bean. Her tote bag flipped over, and her agenda and papers spilled onto the floor.
His arm slipped around her back, holding her to him as their groins banged. Bangity, bang, bang. She pinched her eyes shut. Please doors do not open again. Not because she was enjoying the ride. She wasn’t…she didn’t think. But because if they opened now, anyone standing on the other side would definitely get the wrong idea. Honestly, how could they not? They would be the prime photo op, posted and shared on social media sites. She’d never be able to face her friends, fans, industry professionals, if they thought she was dry humping some former crush on the elevator floor.
She braced her hands on the floor and held on, eyes closed. If the hydraulics let go this second and the elevator crashed to the basement, that’d be A-okay in her books. Breathe, Andi, just breathe. She tried not to think about the well built, athletic man beneath her, or how he’d just splayed his hand over the small of her back, or how good his fingers felt pressing into her flesh. His fingers stretched downward, and another rough jolt caused them to slip under the band of her panties. Was that…? Had he just lifted his hips? Twice? 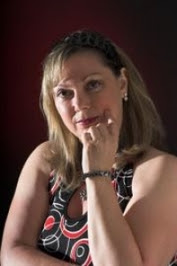 ABOUT THE AUTHOR:
New York Times and USA Today bestselling author Cathryn Fox is a wife, mom, sister, daughter, and friend. She loves dogs, sunny weather, anything chocolate (she never says no to a brownie) pizza and red wine. Cathryn has two teenagers who keep her busy and a husband who is convinced he can turn her into a mixed martial arts fan. When not writing, Cathryn can be found laughing over lunch with friends, hanging out with her kids, or watching a big action flick with her husband.
Author Links: Website | Facebook | Twitter | GoodReads

INSPIRATION BEHIND THE CHARACTERS
All my characters are fictional, but they’re not created from scratch. Every character I’ve ever written has a part of me in them but I have to say Andi Palmer, in Betting on the Wrong Brother just might have the most of me in her. For this story, I drew on my own personal experiences from the numerous conventions I’ve attended, and tossed in a few quirks from my friends, and voila, Andi was born. It wasn’t so hard to do, since she was a romance writer and I’m a romance writer. We had a lot in common! Most times I have to do a lot of reach into careers etc, but this time all the information was at my fingertips—because it’s a life I live. The secondary characters in the book were also drawn from friends, and coauthors. Jan is actually based on Award winning author Jan Meredith, author of Playing Doctor, Entangled Brazen. I had so much fun writing this story, and my hero Ryan had no idea what he had in store for him when Andi set her sights on revenge.
To learn more about Cathryn and her upcoming releases please visit her here:
Newsletter Sign up: https://app.mailerlite.com/webforms/landing/c1f8n1
Website: http://cathrynfox.com/
Blog: http://cathrynfox.com/blog/
Twitter: https://twitter.com/writercatfox
Facebook: www.facebook.com/authorcathrynfox
Goodreads: https://www.goodreads.com/author/show/91799.Cathryn_Fox