Enter to Win a Digital Download copy of THE BRIDE WORE DENIM and THE BRIDE WORE RED BOOTS, books 1 & 2 in the Seven Brides for Seven Cowboys Series.) 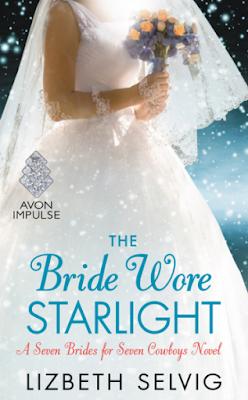 In The Bride Wore Starlight ( Seven Brides for Seven Cowboys #3) by Lizbeth Selvig, Joely Crockett has struggled with what her life has become since a devastating car accident left her most prized possession dead. She's never going to be the beauty she once was, now that she's scarred, bound to a wheelchair and having to be rolled down the aisle at her sister's wedding. However, it's not long before she's finding the spark she once had before she was injured, and it's all due to Alec Morrissey, a man that's had his own fair share of loss.
Having enjoyed the other books of this series, I couldn't wait to read what was in store for Joely, and again Ms. Selvig has penned an incredible read about two main characters overcoming the tragedies of their pasts, so they can have a chance at happy ever after. This book started off brilliantly, but it was when the hero and heroine met that the story really took off for me. Becoming fast-paced and completely engrossing with its well-written dialogue that was a perfect blend of playful and intense.
I absolutely loved both main characters, their back stories and the challenges they had to overcome to be together. Such as a soon-to-be ex-husband giving Joely grief, and whether Alec can give his aunt and uncle a second chance.  Alec is good for Joely. He really pushes the heroine to see that she's not helpless. That she can do anything she wants to, if she's willing to take charge of her life, instead of allowing her injuries to continue to hold her back. Plus, it helps that he's been in a similar situation.
While the heroine, she really grows throughout this story. At first, she seems rather fragile with everything that's happened to her. Yet, once she meets Alec, she becomes strong and brave. A real fighter. Determined to reclaim her life, and see which aspects of her old life she can still do. Such as ride a horse, drive a car, even discover whether she has a chance to try for the career she's always wanted.
The chemistry between Alec and Joely is really intense from the moment they meet, and every time they banter, whether playfully or either of them losing their temper, the sexual tension increases until it's spills over onto the pages in nicely-detailed sex scenes.
Overall, I loved this story and believe it's the best one yet of the series. Besides, I really liked how much the secondary characters encouraged their relationship because if anyone deserved to be happy it was Joely. The story ended wonderfully with Alec surprising Joely in more ways than one. Firstly, by doing something that he swore he'd never do again and then by asking Joely about their future together. I would highly recommend The Bride Wore Starlight, especially if you enjoy ex-military heroes, cowboys, or wounded heroines fighting for that much deserved second chance.

Once comfortable on stage in front of thousands, Joely Crockett is now mortified at the thought of walking—or rolling—down the aisle at her sisters’ wedding. Scarred and wheelchair-bound, the former beauty queen has lost more than the ability to walk—she’s lost her fire. But when one handsome, arrogant guest accuses her of milking her injuries and ignites her ire, Joely finally starts to feel truly alive again, and soon it’s impossible for her to resist her heart’s desire.

Alec Morrissey knows a little something about loss. A famous rodeo cowboy before he was injured in Iraq, he’s managed to create something of a normal life, even if it’s not the one he always imagined. Encountering stunning but damaged Joely, he sees a kindred spirit who can learn from his mistakes.

As these two healing souls begin to fall in love under the Wyoming stars, they must discover if they are willing to give in to the tragedies of life or fight for a future together.

Inspiration behind the characters – Lizbeth Selvig


Hi to everyone at Book Magic! I’m happy to be spending the day here—thanks so much for inviting me to join you. I’m asked often where I got the inspiration for my characters Joely and Alec, the heroine and hero of my latest book, “The Bride Wore Starlight.” In the case of this story, I love talking about my characters because they are a couple of my favorites—and they were a little bit challenging to write, since both of them are physically challenged, but they each have very different emotional wounds.
This story started back with the brainstorming for my latest series, “Seven Brides for Seven Cowboys.” My first vision for the series was to do a modern-day Bonanza, where women instead of men ran a huge ranch. The Crockett Family was born from that idea and over the course of many planning sessions the concept of seven brides took shape. That’s how I ended up with Amelia, Harper, Joely, Raquel, Grace, and Kelly—the Crockett sisters—and Cami, their long lost cousin.
In the first novel of the series I knew that the only unattached sister, Joely, would volunteer to take over managing the struggling Paradise Ranch—their home. I also knew she would not be the right one for the job. When Joely was involved in a serious car accident—she knew it, too. I learned a lot about Miss Joely even though she was a secondary character in the book. She’d been trading on her beauty all her life because she’d been a beauty queen many timesfrom childhood on up to being Miss Wyoming. Once she woke up after her accident, she found herself with a scarred face, and permanently injured, unable to walk. To say depression hit is an understatement.
In the second novel, Joely is still a minor character and we see her struggling with getting better. It was hard for me to know exactly what she needed, and she wasn’t talking to me or anyone else about her state of mind. But I knew I had to find exactly the right hero for her—someone who could understand exactly what she was going through, but who needed her loving spirit as much as she needed his strength.
Alec Morrissey walked into Joely’s life and literally began telling her to pull up her big girl panties the first time they met. This, of course, didn’t sit well with wounded Joely, who wasn’t about to let some former rodeo star, with his good looks and swaggering walk tell her what she needed. How could he possibly understand? And when he forced her to get up out of her wheelchair and dance with him at her sisters’ double wedding—she was beyond furious when she was embarrassed in front of everybody.
But, from that point on Joely started to grow within her novel, because what she didn’t know was that Alec was also severely wounded and had all the moral authority in the world to help her get over her accident. It was amazing to watch Joely journey away from the belief that she had no worth because nobody had ever loved her for anything but her outer beauty. Step by step, she learns that, despite challenges, she’s powerful enough to do anything she wants to do—and she’s very worthy of being loved.
Alec seemed very together to me (and to Joely) at first. He completely believes what makes him strong is the ability to bury things that remind him of pain and could make him bitter. He has a major physical disability, but he’s learned to accept it and get on with life—and he even has the sunny disposition to go along with it. But what he doesn’t know is that burying his past and his anger really is a weakness. When he learned (with Joely’s help) to embrace what he saw as weakness and truly faced his fears—he grew into the truly strong and resilient man he wanted to be.
And he was also the person to convince Joely she didn’t need to trade on outer beauty—that her talents of kindness, understanding, and the ability to love despite peoples’ flaws are her truest assets are what make her strong.
I loved how my vision for them finally came together:  they fell in love because they found their true selves in each other. I know with all my heart they’ll be together forever!
Creating believable characters is one of the great joys of being an author. Not only was it fun to bring Joely and Alec into the world, it was fascinating to explore the concept that beauty is often way too important in our society. By bringing two imperfect people together, it was possible to tap into the important idea that we shouldn’t be obsessed with flawless beauty—we should be obsessed with true love!
I hope you enjoy “The Bride Wore Starlight.” If you’re interested in reading Joely’s entire journey from beginning to end, check out Harper’s book “The Bride Wore Denim,” and Amelia’s book, “The Bride Wore Red Boots.”  I think you’ll fall in love with all the Crockett Girls!