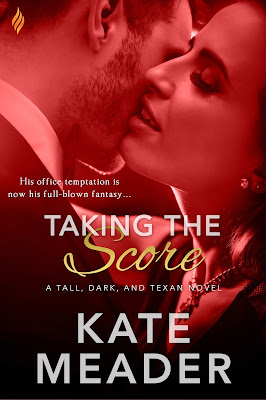 In Taking the Score (Tall, Dark & Texan #2) by Kate Meader, Emma Strickland has done her best to look out for her little sister, but the unpleasant situation she finds herself in at the moment couldn't possibly get any worse, or could it? By day, she's a mighty fine PA. Yet, it's the job she has at night that she's been forced into that is taking its toll on her. Even though it's for a good reason -- to pay off her sister's debts. Moonlighting as a waitress at a sleazy strip club is easy enough, but when she's forced to give a lap dance to a VIP customer, is when things start to get complicated since the customer is her daytime boss.
Brody Kane can't get his assistant out of his head, but he knows getting involved with her is not a good idea. Business and pleasure should never be mixed. However, a night out with his newest client brings forth possibilities he never imagined, especially when the beauty giving him the worst lap dance ever turns out to be his prim and proper assistant.
This is the first book I've read by Ms. Meader, and I've got to say that it does not disappoint. I was hooked from the opening line, as Brody is facing a dilemma where his friends are pushing, for him to find a woman to have a night of fun with; and from there, the book kept getting better and better with every challenge this couple faced.
I really liked Brody and Emma, and the dialogue between them was so entertaining that I finished this book rather quickly. Emma has had a hard time in life in caring for her sister. Trying to solve her sister's problems seems at times too much for Emma to handle. Yet, she's a fighter. I liked that about her. Her independence and stubbornness made it seem, as if the only person she could rely on was herself. Then again, that was understandable, considering her past.
While Brody, he has a real knight in shining armor quality to him when it comes to Emma. Yet, his arrogant and demanding ways did frustrate me at times because he didn't trust Emma when she needed him to. Even though, she'd never given him any reason not to trust her. She told him over and over again that she was willing to handle her own problems. That she didn't need him to save her.
When it comes to women, Brody finds it hard to trust because of how his ex deceived him. Yet, Emma tempts him so much that he can't stay away from her. So much so, that hot, fan-your-face sex scenes heat up the pages, as Emma and Brody give into their intense chemistry, which was there from the moment they first interacted and just kept building the sexual tension between them until I thought the pages would spontaneously combust.
Overall, this was a really great read where the secondary characters are determined to get Emma and Brody together, and which has me looking forward to the next story in the series. The ending wrapped the story up nicely with the way Brody convinced Emma that he needs her in his life. Then there was the surprise that Emma had for the hero, which made Brody absolutely ecstatic. I would recommend Taking the Score by Kate Meader, if you enjoy sexy heroes that like to be the heroine's knight in shining armor.
OVERALL RATING:

A sexy category romance from Entangled's Brazen imprint...
His office temptation is now his full-blown fantasy…
Paying down her sister’s debts has left Emma Strickland with little more than the thrift store suit on her back. And as if the suckfest couldn’t get worse, she’s forced to moonlight as a waitress to support herself and her cat. At a strip club. Her uptight, sexy-as-hell boss Brody Kane can never find out.
Texas property tycoon Brody Kane hired Emma for her spreadsheet skills, but her prim and proper demeanor sealed the deal. There’s no room in his life for a sexy distraction … and yet, he can’t stop lusting after the delicious Ms. Strickland. And then he takes an important client to a Chicago strip club and gets the worst lap dance in adult entertainment history. From Emma.
Now that he knows his office good girl has a naughty streak, Brody makes it his mission to uncover her secrets, one steamy, illicit, over-the-desk encounter at a time. But Emma is hiding more than her side job, and her final secret could end up destroying them both.
Buy Links:   Amazon | B & N | Google Play | iTunes | Kobo

Good. Fuck.
Brody had entered some sort of fever dream. East was west, up was down, and Ms. Strickland was a stripper who had just wrapped her typing fingers around his granite-hard cock.
His prim and proper personal assistant was neither prim nor proper, but he’d give her top marks on her next performance evaluation for personal. The hand stroking his dick was very personal indeed. No way in hell was he gifting sexy little Emma Strickland to whatever drunken louts remained out on the main floor. If he had to buy the damn club so he could stop her from working here, he would.
Right this minute, his gorgeous PA belonged to him.
His gorgeous stripper PA.
All these contradictions were driving him mad with curiosity, confusion, and mind-wiping lust. He had to know more about why she was here.
He had to know her.
His mouth returned home to hers, teasing, dragging a frustrated moan from her throat.  She chased his lips but he pulled back, then went in again with a nip of her lower lip. Soft and pillowy. He shouldn’t be playing this game with her. It wouldn’t give him information. It would only frustrate.
Them both.
“Brody—”
“Hush, now, I’ll give you what you need.” He ground his cock against her hand, and her shocked gasp almost undid him. “That’s what you want, right?”
“Yes,” she whispered. “That’s—yeah, that’s—”
No, this is. Though it killed him, he removed her hand and hitched her leg over his hip so he could rub his best parts against her best parts. A grinding thrust had her moaning, a sound so sweet he longed to hear it over and over. If he could hear it along with his name when she came, it would be revelatory.
The problem was he might shoot off first.
He had to get her off quicker. Still with one hand under her ass, his other found the zipper at the side of her shorts and pulled, creating a gap for his searching fingers.
They both moaned as he entered taboo territory. She was already soaked, her slick heat spilling over his fingers. Every stroke ramped up her moans, drove him to brink. To feel her clamp down on his fingers as she rode them through her orgasm— The goal spurred him on. His mouth was so close to hers he could have kissed her again, accelerated the pace, but he didn’t want to miss her eyes, which had fluttered closed.
“Look at me when I make you come, Emma.”
Those eyes flew open, fiery blue suns exploding with desire.
He resumed his teasing stroke below and kept his gaze on his target: those beautiful lust-stoked pupils. Little silver sparks seemed to light up when he stroked a little slower. She liked it languorous. All women were different, but his experience was that most preferred it quick, more friction, get it done.
Not his Emma. She rocked against his hand, her mouth parted in a silent plea.
He turned his finger so the callus glanced over her clit. Her breathing quickened. She tried to say something but nothing emerged, her words lost in the build to her orgasm.
Fascinating.
He had always enjoyed puzzles, working things out, moving pieces around until it made sense. Ms. Strickland did not make sense.
He would learn her.
He plunged two fingers in and thumbed her clit, spreading moisture over where she was most sensitive. She cried out and locked down around his digits.
“That’s it. Squeeze me tight, baby. Give me a preview of what my cock can expect.”
Shit, he needed to shut that down. Not chatty by nature, in Brody, lust seemed to open some conduit in his brain and tap into his basest desires, producing a torrent of dirty talk most women blushed to hear. A nice girl like Emma Strickland would not enjoy his trucker mouth, but then he recalled that he was no longer dealing with a nice girl.
His dick was still contained, and this was already the hottest fuck of his life. 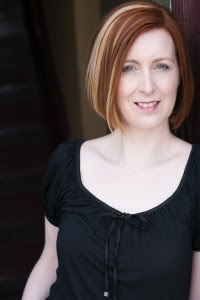 Originally from Ireland, Kate Meader cut her romance reader teeth on Maeve Binchy and Jilly Cooper novels, with some Mills & Boon thrown in for variety. Give her tales about brooding mill owners, oversexed equestrians, and men who can rock an apron or a fire hose, and she’s there. Now based in Chicago, she writes sexy contemporary romance with alpha heroes and strong heroines who can match their men quip for quip.
Author Links: Website | Facebook | Twitter | GoodReads