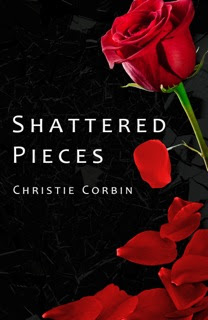 In Shattered Pieces by Christie Corbin, it's hard for Tori Blair to trust a man enough to want to pursue a new relationship with, especially after her last boyfriend left her emotionally and mentally scarred by how he treated her. No way would she expect someone to have to help her deal with her nightmares when she can barely handle them herself. At least with work keeping her busy and help from amazing friends, the only time she has  to deal is when she's home alone. But now, her friends want to see her enjoying life again, and what a better way than for her to meet the new fireman in town.
It's been years since Chandler Ashby last saw Tori. But he's never forgotten his high school sweetheart, and now he's back in her life to see if it's possible for them  to have a second chance at happy ever after. However, he knows something haunts Tori, and he'll do anything to chase the darkness away. But if he's to succeed, he's going to need to take things slow between them and show her that she can trust him just as she used to years ago.
Although I was surprised by the direction that the plot took in this book, and that the dilemma with her ex was resolved earlier than I thought it would be, I've got to say that Ms. Corbin has penned a good novel. Encompassing a heroine determined to fight for her independence while seeing if she can ever put her faith in men again; and a hero determined to win back the only woman he's ever loved, even knowing his mission won't be easy after learning what she's suffered at the hands of her ex.
The dialogue was intense and entertained me from start to finish due to the main characters back stories, and the obstacles this couple face to achieve their happy ever after. Will Tori ever be free of her ex? How will her ex drive her insane, so she realizes how serious he was about his final words before she left him? I felt sorry for Tori. Her ex is a nasty piece of work, and deserves to be locked up. Yet, it seems she can't escape him. However, her friends are a godsend the way they circle around her, offering her their support and love and showing her that she doesn't have to go through what she's going through alone.
I really liked both Chandler and Tori, as well as the secondary characters. Rachel and Josh are kind and caring and would do anything for Tori. Really, she's lucky to have the wonderful couple in her life. Then again, what are best friends for. But even though they're worried about her, they're willing to accept any decisions she makes about her future. Because they realize, as much as they want to protect her, they also want her to live her life without fear again. To re-discover that there are men in the world that are the total opposite to her ex. Men such as Chandler.
Both the main characters go through a lot within this story, and I liked how they handled each obstacle they faced. Tori is strong, brave, and determined. I liked that she wasn't about to let her ex win. Seeing Chandler again is such a big surprise, but definitely a nice one. Because not only did she know him, but he made her feel things she hadn't felt in a long time. Does that mean she didn't love her ex like she thought? Was she with him all because she didn't want to be alone? Her ex makes things difficult throughout this story, yet I thought Tori handled things quite well.
While Chandler, he's strong, tenacious and protective of Tori. He'll do anything to make sure she's safe, even if he has to intimidate her ex to make him realize that Tori will never be his again. What he does could have gotten him into big trouble, so I was glad that he escaped the punishment he could have received from any direction. Whether it be from his boss, the police, or from someone else if her ex decided to make a complaint. Certainly, his connection to Tori makes him a target. It wasn't as if he shouldn't have expected some sort of threats aimed towards him once he and Tori started getting close again. Her ex is a whole lot of psycho.
Overall, this was a good book where nicely-detailed sex scenes heated up the pages, and illustrated the strong chemistry Chandler and Tori had from the moment they came face-to-face for the first time in years. But what I liked most about their growing relationship is that Chandler didn't rush Tori. The way this story ended was wonderful, but there were a few tears that I needed to flick away due to what happened to Chandler when he risked his life to save Tori. He definitely proved how much Tori meant to him by what he did, even if it did almost cost him his life. I would recommend Shattered Pieces by Christie Corbin, if you enjoy second chance romances, especially where high school sweethearts are reunited.

BLURB:
Struggling to mend a broken soul can be more painful than leaving it shattered. Just ask Tori Blair.
To most people, Tori has the perfect life.  She has a great job, great friends. But looks can be deceiving.
Behind closed doors, she battles the demons haunting her from a previous relationship. No matter how hard she tries to break away from the past, it keeps holding her down.
Chandler Ashby thought joining the army to follow in his dad’s footsteps was what he wanted. After realizing military life wasn’t for him, he left and became a firefighter. A new career in a new city was exactly the fresh start he was looking for.
But a chance encounter reunites him with the high school sweetheart he left behind. He soon realizes that the carefree girl he once loved is now a woman fighting to overcome fear and anxiety caused by another man.
Will Chandler be able to save Tori from her demons, or will they both go down in the fight?
Buy Links:      Amazon 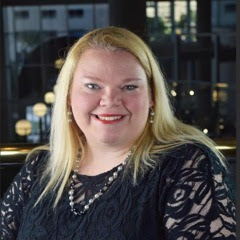 ABOUT THE AUTHOR:
Books have always been a passion of mine but after going to nursing school and reading way too many textbooks, I quit pleasure reading for a while.  I started reading again a few years ago and I haven’t stopped since.  After attending an author signing, I became inspired to write my own novel.  I’m an author in the Contemporary Romance genre.


I reside in Georgia with my husband and son.  Born and raised in Georgia, I consider myself a true southern girl.  I love my sweet tea and football!  When I am not working as a nurse or writing, I enjoy spending time with family and friends.

INSPIRATION BEHIND THE CHARACTERS
My inspiration for the book came from a news story I saw on TV. I used the news situation and came up with a fictional story similar to what happened. The characters are definitely kindred spirits of my friends. I pulled characteristics of various friends to shape Tori and Chandler. Rachel and Tori's friendship is definitely based off of the relationship I have with my best friend.

When you write, the characters become a part of you. There are days when all you think about is what's going to happen next in the story. You start to hear the characters' voices in your head. I have an awesome editor and 3 awesome beta readers that helped make the story what it is.