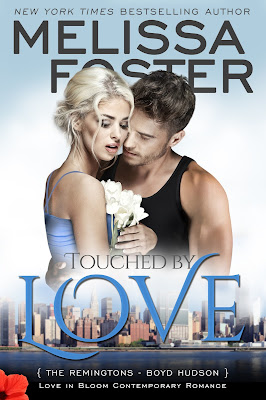 Touched by Love
Love in Bloom: The Remingtons #6
By: Melissa Foster
Released May 18, 2016
World Literary Press

In Touched by Love (Love in Bloom: The Remingtons #6) by Melissa Foster, Janie Jansen hasn't allowed the fact that's she blind hold her back from doing anything she puts her mind to. Living and working in New York City has been good for her; made her the independent woman that braves the Subway amongst the crowds. But when an incident causes her to have to rely on other people, Janie finds that needing help once in a while isn't necessarily a bad thing, not when she has firefighter Boyd Hudson helping her.
This is the first book that I have read by Ms. Foster, but I've got to say that it won't be my last. From start to finish, this story was a heartwarming and fast-paced read that took me on an emotional journey, as Janie struggles to deal with the fact that her independence has been threatened and Boyd struggles to deal with past torments that left him and his siblings growing up without their parents. I really liked how this story started with Janie almost getting caught for not doing what she should be doing at work, and then Boyd knocking her need for using romance novels as a means of escape from the pressures of her life.
The dialogue was well-written and compelling, as Janie is very independent and hates being a burden to anyone. She's definitely a challenge for Boyd, as he has to convince her that there's nothing wrong in letting someone help her. The teasing banter between Boyd and Janie certainly creates some intense sexual tension between the pair, because Janie is determined to prove that romance is real and there's nothing wrong with reading books that encompass it. However, the dialogue is also intense due to the main characters back stories. Boyd suffers from nightmares that he doesn't like talking about, because they're a reminder of all that he's lost. While Janie, her overprotective parents are a bit full on. Their need to protect her felt very smothering, and it was no wonder she had to get away from them.
I really liked both characters, as well as the secondary ones. Boyd's friends and family are really great, and the way they accept Janie so easily and treat her how she wishes for them to treat her made me smile. Yet, what I liked most when they were enjoying time with friends is how Janie charmed them with her wit and humor. Indeed, one of the best moments of the book was when some woman was trying to hit on Boyd, and Janie totally ruined it by making a comment that was totally untrue just to chase the woman away.
Janie is strong, brave, independent and stubborn. She hasn't had an easy life with her parents treating her like they do. They're too overprotective, and I couldn't blame her for wanting to avoid them for as long as she could. As for her life in New York, she's done well for herself. She excels at her job, and I liked that she was trying to branch out and do something else such as attempting to write a romance novel. The way she does research for her book was super hot. She and Boyd do things she's never done before including dirty talk and role-playing, which cause some major heat between them that eventually spills over onto the pages in scorching sex scenes.
While Boyd, his past haunts him and has certainly influenced what career path he ended up in. Being a paramedic and a firefighter as well as hopefully getting into medical school doesn't leave time for relationships, but he can't deny how Janie makes him feel. He's determined to help her, and show her that she's not a burden. That he wants to help her because he wants to spend time with her and get to know her. Boyd is also quite charming, and I liked how he won Janie's best friend over. Then again, if he didn't, there would be no hope for a relationship between he and Janie.
Overall, I really enjoyed this story and it has definitely made me want to read the other books in this series. The way this story ended was perfect, because Boyd got his wish of getting Janie into the costume he wanted her to wear. I would recommend Touched by Love by Melissa Foster, if you enjoy the friends to lovers trope, or heroines that are fiercely independent but find themselves needing to rely on the hero when that independence is threatened.
OVERALL RATING:

Fiercely independent Janie Jansen has always believed there were worse things in life than being blind, and she’s spent her life proving it. She’s moved away from her overprotective parents, built a life in New York City, and is one of the top technical editors in her company. That is, until an unfortunate accident turns her life upside down and she’s forced to give up the very independence she’s worked so hard to achieve.
Firefighter Boyd Hudson pushed past his tragic past and is weeks away from accomplishing his ultimate dream—being accepted into medical school. His intense focus on his goal while working three jobs has taken its toll. With a trail of failed relationships behind him, Boyd is painstakingly aware of his limitations and avoids girlfriends completely—a difficult task given his attraction to one of his co-workers.
When Boyd comes to Janie’s rescue, she’s forced to accept his help, and Janie discovers there’s more to the sexy-sounding office flirt than one-liners. Their connection deepens as Janie heals, but it turns out that Janie isn’t the only one who needs healing. Boyd’s painful past comes back to haunt him, threatening their relationship and forcing Boyd to reevaluate everything he knows about himself. 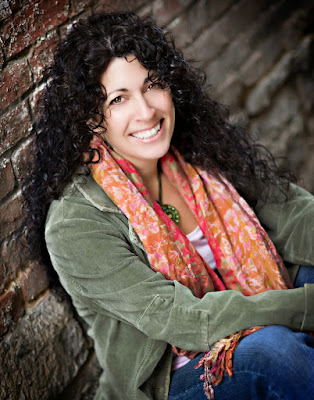 ABOUT THE AUTHOR:
Melissa Foster is a New York Times & USA Today bestselling and award-winning author. She writes contemporary romance, new adult, contemporary women’s fiction, suspense, and historical fiction with emotionally compelling characters that stay with you long after you turn the last page. Her books have been recommended by USA Today’s book blog, Hagerstown Magazine, The Patriot, and several other print venues. She is the founder of the World Literary Café and Fostering Success. When she’s not writing, Melissa helps authors navigate the publishing industry through her author training programs on Fostering Success. Melissa has been published in Calgary’s Child Magazine, the Huffington Post, and Women Business Owners magazine.

Melissa hosts an Aspiring Authors contest for children and has painted and donated several murals to The Hospital for Sick Children in Washington, DC. Melissa lives in Maryland with her family.