REVIEW & GIVEAWAY: INTO THE WHIRLWIND by KAT MARTIN 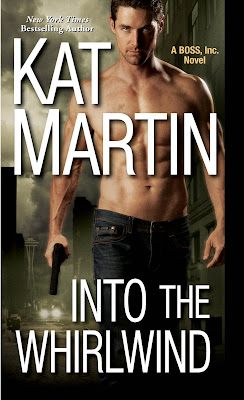 Megan O'Brien knows there's only one person she can turn to when her son is kidnapped and the ransom demand says she's not to call the police. However, she's uncertain what sort of reception she'll get from Dirk Reynolds, her former bodyguard, when she asks him for help. Luckily, he remembers how much her son means to her, and is determined to help, even if he's been unable to forgive her for the way she treated him.
Seeing Megan again after the way she ended things between them hurts. It makes Dirk Reynolds want to deny her request for help in finding her son, and get one of the other men of B.O.S.S, Inc to take her case. Except she's not willing to take no for an answer, and she wants him to be the one to help, because she trusts him to succeed. All Dirk has to remember is to keep his guard up, because falling for her all over again is out of the question.
What a thrilling, fast-paced, action-packed read Ms. Martin has provided her readers, which captivated my attention from the very beginning with it's pulse-pounding suspense that did not let go until the end. The way this story started was fantastic, as Megan realizes that she needs Dirk's help, and that she's not above begging to get him to investigate her son's kidnapping. Who has taken him? Why have they taken him? Desperate for answers to those questions is one of the reasons that kept me flipping the pages until I discovered the truth.
The dialogue was well-written and intense due to the main characters back stories, everything the hero and heroine go through to find her son, and what happens to Megan when she's betrayed by someone that should care about the fact that they're taking her away from her son. Truly, it was hard not to be affected by the emotions and the reactions of the heroine. She works so hard to keep from falling apart, because she knows her son will need her. Yet, it's impossible, especially when things mightn't go the way she wishes, as the person that kidnapped her son is quite well organized. Is a person that has too many contingency plans for Dirk to figure out and counteract before it's too late.
Megan is strong, brave, determined, and stubborn. I could understand why she was so determined to be by Dirk's side every time they got a lead. Her son would need her, if they found him. I also liked that she had so much faith in Dirk, and that she was determined to fight for their relationship this time around. Something she should have done months ago, instead of ending things between them because she made some wrong assumptions about him. Assumptions that are proven wrong by how her parents and son react to him, and what she learns about what he does besides working for B.O.S.S, Inc.
While Dirk, he's strong, confident and tenacious in his pursuit of Megan's son. He won't stop until he's chased down every lead, and recovered the boy. Also, I liked how protective he was of Megan, and that he would go to any lengths to succeed in ensuring her and her son's safety. Honestly, his emotions and reactions were hard not to be affected by as well, as he tries so hard to fight his feelings for Megan while wondering whether he'll succeed in his endeavor to find her son and protect both he and Megan at all costs. Especially when the person that ordered the kidnapping still needed to be identified.
Scorching sex scenes heat up the pages, and illustrate the strong chemistry these two have from the moment they come face-to-face again in months. Dirk tries his best to ignore the feelings he still has for Megan, but in the end it's useless. There's no denying how well they fit, and how right they are for each other. What I liked most is how determined Megan was to get Dirk to give her a second chance. Because she realized how wrong she was about him, and that there was no other man that could mean as much as he does to her.
Overall, this was an incredible addition to the B.O.S.S, Inc series for Ms. Martin where the secondary characters entertained me just as much as Megan and Dirk. The father of Megan's son is a real piece of work and it's palpable through what he does, because he's in some trouble that could get him arrested. Then there's Val, Megan's best friend and Luke -- one of the men that work with Dirk -- who aren't afraid to offer their advice or opinions. Val wants Megan to make things right with Dirk, because she remembers how much he was hurt by the heroine ending things between them. While Luke, he's worried about Dirk and the fact that he doesn't want to see his friend get hurt again.
The way this story ended was wonderful, despite what Megan goes through at the hands of the bad guys. Certainly, Dirk still knows how to surprise Megan and what he does in the epilogue definitely cements the bond between the hero and Megan's son. I would recommend Into the Whirlwind by Kat Martin, if you enjoy second chance romances or romantic suspense. I would also recommend reading the first book of this series, Into the Fury, as it introduces readers to Megan, Dirk and some of the secondary characters in this story.
OVERALL RATING:

A bodyguard, a bounty hunter, a private investigator, no one can handle the heat like the men of BOSS, Inc.


Megan O’Brien is at her wit’s end. Her three-year-old son has been kidnapped. No police, says the ransom demand. Fearing for her son’s life, Meg has no choice but to turn to her former bodyguard, Dirk Reynolds.
Dirk’s never forgiven Meg for the way she left him after their brief affair. But with bounty hunter Luke Brodie on his side, Dirk knows he’s got to help Meg rescue her son.
The few clues they’ve gathered send them spiraling into a murky world of big banking and international crime. Meg may be way out of her depths, but she’s seeing a side of Dirk she never suspected—one no woman could possibly resist.
Buy Links:      Amazon | B & N | Google  | iTunes | Kobo