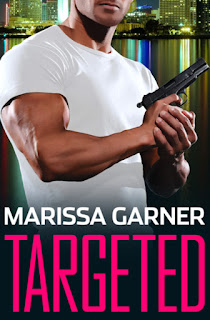 In Targeted (FBI Heat #2) by Marissa Garner, FBI Special Agent Marissa Panuska knows that the undercover assignment she's on could very easily end with her being shipped home in a body bag. Still, nothing is going to stop her from risking her life to bring down those that wish to set off a dirty bomb and kill hundreds of people. However, it's getting harder and harder for her to maintain her cover when the group she's infiltrating is so filled with hate, until the mysterious Ameen Ali comes to her rescue when she gets herself into a precarious situation.
Former Navy Seal Ameen Ali lost the most important people in his life when terrorists killed his family during an attack on American soil. He's determined to take down those that threaten people's lives, even at the cost to his own. Saving the life of the gorgeous woman that seems to be part of the group he's looking to take down, he's determined to take advantage of her gratitude. Except she's more stubborn than he could have imagined, and convincing her to join forces may prove harder than he thinks.
Having really liked the first book of this series, and being introduced to Marissa in it, I was looking forward to reading what Ms. Garner would put the strong and brave woman, through in this story on the road to happy ever after. And honestly, it was everything I'd hoped for and more. Right from the beginning, this book was highly entertaining and gripped my attention immediately with it's strong plot, solid characters as well as a narrative and dialogue that kept me flipping the pages wanting to see how this story would develop. Especially after what happens to Marissa in the opening chapter, and the danger than Ameen saves her from.
I really liked both the main characters as well as the secondary ones, even though I thought that there were too many characters narrating the story. However, in saying that, all those characters narrating was necessary, as it illustrated how big of an investigation Marissa was on was, and that she couldn't do it alone. The friendship the heroine shares with her friend, Ben, proves that she needs someone she can trust to help her. Besides, they have a unique connection that was beneficial to her when she needed him most.
Marissa is strong, brave, determined, and stubborn. Being back in the field, she seems more alive than what she would be like working behind a desk. Her determination to take down the terrorist cell, even though everyone believes it's too dangerous for her to keep going, was what I liked best about her. She couldn't allow for the bad guys to hurt innocents without doing everything in her power to make sure she was the one that would take them down. Especially after all that she's witnessed infiltrating the terrorist cell, which seemed to be having more of an effect on her than she thought it would. As if a virus coursing through her that may prove difficult to get rid of.
While Ameen, he's confident and determined. No way could allow innocent lives to be lost when he could do something about it. Yet, what I liked most about the hero is that he didn't allow Marissa's stubbornness to get in the way of what he had to do. He was going to protect her, no matter what she threatened him with. They also have an incredible connection, which is proven by the fact that it's hard for her not to trust him. Until eventually, the strong chemistry they have spills over onto the pages in scorching sex scenes. Marissa needed Ameen, so she didn't feel so alone and to make her realize that there was light at the end of the dark tunnel she seemed to be caught in, if he was willing to explore their connection more when the case was over.
Overall, this was a very good addition to the FBI Heat series by Ms. Garner, and I can't wait until the next one, considering one of the secondary characters lost someone important. The way this story ended was perfect, despite what happened to the main characters and the fact that I thought all hope was lost when it came to the hero. I would recommend Targeted by Marissa Garner, if you enjoy the mysterious strangers trope or romantic suspense.
OVERALL RATING:

BLURB For San Diego's elite FBI agents, risking their lives is standard procedure when it comes to capturing the city's most dangerous criminals-but falling in love is the greatest risk of all.
RIPPED FROM THE HEADLINES . . .
FBI Special Agent Marissa Panuska faces the most explosive case of her career when she impersonates a female terrorist to infiltrate an al-Qaeda cell. Her dark hair, olive complexion, and Arabic fluency make her the perfect imposter, but each passing hour raises the risk of discovery. Can she stop the dirty-bomb plot-alone-when the Feds don't even know the target? And should she trust the mysterious man who bursts into her life when her cover is blown?
SO CLOSE TO REALITY . . .
Former Navy SEAL Ameen Ali has a very personal reason for hating the terrorists and vowing to stop them. But when a beautiful woman joins the sleeper cell spreading death-to-America propaganda at his mosque, he doesn't want to believe she shares their evil goals. Can he convince her to join forces before it's too late?
at 23:21