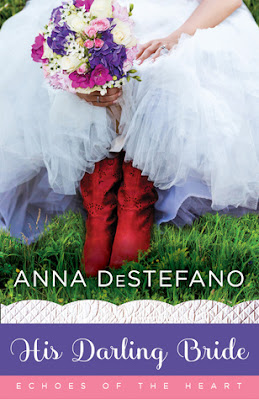 In His Darling Bride (Echoes of the Heart #3) by Anna DeStefano, Bethany Darling has a right not to trust men, especially after what her ex did to her. But the moment Mike Taylor helps her out of a rather awkward situation with her ex, she feels an incredible connection to him. But with her desire to re-discover her love for painting and to re-connect with her foster family, she doesn't have time to start dating again. However, it seems it isn't so easy to avoid the sexy man, especially when she discovers his role in helping her foster father on his road to recovery after the man's heart attack.

Having not read the other books of this series, I was pleased by the fact that this story can easily be read as a stand-alone. Right from the beginning, this book was captivating, fast-paced and a story I could not put down for even a second, as the heroine's ex is a real piece of work and needed to be put in his place. Needed to have someone make him realize that there was no way Bethany was going to go back to him.

The dialogue was compelling, and was a nice blend of intense and playful. The term 'kindred spirit' definitely applies to the bond Bethany and Mike share. What they've lived through in the past definitely made me understand why they were wary of trusting people outside of their close-knit circles. Mike because of his secret identity, and Bethany because she's been burned by her previous boyfriend. Yet, it's palpable that the strong chemistry they have would be impossible to deny. While the intense dialogue is due to the main characters back stories, whether Bethany can handle the truth about Mike's secret identity, and the problems Mike faces from his parents. Will he give in to the demands of his parents to save the peace, or will he finally stand up to his parents and their need to manipulate him?

I really liked both the main characters, as well as the secondary ones. Except for -- of course -- Mike's parents, especially his mother. She's a real piece of work that treats her son more like a servant than her child. Her you-should-do-this attitude really annoyed me, because if that didn't work she thought manipulating him might. Why couldn't she just tell him the truth of her need for him to do what she asks?

Bethany is strong, brave and determined to get her life back on track after what her ex-boyfriend did. It isn't easy for her, because she believes she has a lot to make up for with her family. I could understand why she didn't trust easily after all she's been through, but I cheered when she finally gave Mike a chance after she discovered his biggest secret. Also, she's kind and caring, and I loved the relationship she has with one of her adopted sisters. They're close and realize how lucky they are to be a part of the family that they are.

While Mike, he's been through tough times, yet none tougher than the loss of his brother. It's made him a wanderer; a man determined to explore the world while doing what he can to help those less fortunate while giving back what he can to a good cause such as the charity to help find a cure for the medical condition his brother suffered from. He's also kind and caring to those in need like Bethany at the start. Then again, how could he not want to help her when her ex was such a jerk.

Overall, this was an incredible book where the romance was a bit on the sweet side with the exception of the hot kisses this couple shared. Really, if it wasn't for the characters morning after narration, I wouldn't have realized this couple had even spent a night burning up the sheets. The way this story ended was perfect, as Mike fought for their relationship and didn't allow his parents to dictate his romantic future, because no way was he going to give up Bethany. Furthermore, I liked that those she loved helped him to surprise her. I would recommend His Darling Bride by Anna DeStefano, if you enjoy the mysterious strangers trope, or a couple that are destined to be no matter what obstacles they have to overcome; obstacles which include judgmental, overbearing parents.

BLURB:
Bethany Darling doesn’t kiss men at first sight…until she falls into the arms of a handsome cowboy bartender.

A mysterious stranger, Mike helps scare off Bethany’s obnoxious ex-boyfriend. Mike’s touch feels like coming home. But Bethany’s so not interested. Between stalled-out dreams of becoming a painter, troubles reconnecting with her sprawling foster family, and the happy chaos of her sister’s upcoming wedding, Bethany’s already in over her head. But each time she and Mike stumble across each other in small-town Chandlerville…sparks fly.

A famous photographer hiding under a Stetson, Mike Taylor recognizes Bethany as a kindred artistic spirit. Together they rekindle her passion for painting—and she inspires him in unexpected, undeniable ways. Then when Mike’s own past threatens to tear apart his present, Bethany becomes his safe place to turn.

Can these two wandering souls finally trust their hearts? Or will they run from the forever love they never expected to find?
BUY LINK: Amazon