Enter to Win 1 of 3Book Bundle Giveaways consisting of
CAUGHT BY YOU, DRIVE YOU WILD and a baseball keychain 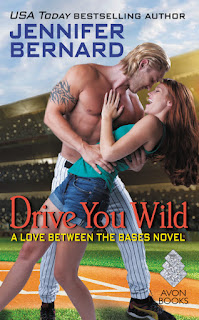 Drive You Wild
Love Between the Bases #3
By: Jennifer Bernard
Releasing June 28, 2016
Avon
+ Add to Goodreads

It’s game on for love in the third novel of USA Today bestselling author Jennifer Bernard’s sexy, baseball-themed series.
Kilby Catfish left-fielder Trevor Stark is a ballpark legend. With his good looks, hitting records, and played-for-the-fans arrogance, Trevor makes women lose their minds and men lose their cool. But every time the major league team comes calling, Trevor purposely keeps himself in the tiny Texas town. Why is heart-tuggingly top secret. Until the team owner’s daughter comes to Kilby . . . trying everything up her sexy sleeve to make Trevor talk.
Divorced and disillusioned at twenty-four, Paige Mattingly Austin Taylor is suddenly starting fresh as an intern at Catfish Stadium. She should want nothing to do with the sinfully hot ballplayer her dad warned her to stay away from. But when she discovers what Trevor is hiding from everyone, she realizes there’s much more to him than his face and multi-million-dollar arm. There’s a heart she seriously hopes to win.