Enter to Win a $25 Gift Card to eRetailer of Choice 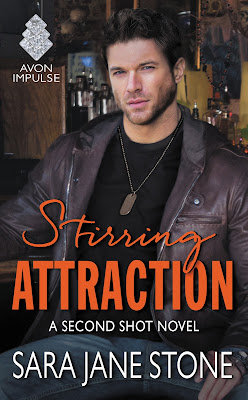 In Stirring Attraction (Second Shot #2) by Sara Jane Stone, after a madman attacks her while she's out running, Lily Greene has been so afraid she's barely keeping it together. Her friends have helped take her mind off things, but it isn't until her ex-boyfriend, Dominic, comes back to town that she starts to feel at least a little bit safe, especially when he's decided to act as her bodyguard and try to discover the person responsible for her attack.
Barely surviving a shooting while a Ranger in the Army, and then losing his career as a result of it, Dominic Fairmore hasn't been able to keep from having a pity party for one. That is until his good friend, Ryan, gives him a much needed reason to snap out of it and head back to his hometown. The woman he's always loved needs him after an attack that has left her scared of her own shadow. Can he discover if the attack was personal, or a case of her being at the wrong place at the wrong time?
Having loved the first book of this series, I couldn't wait to read this one, and I've got to say that it does not disappoint. Right from the beginning, this story was captivating, fast-paced, and there was no way I could put it down even for a second. Not only because it's a second chance romance, which is one of the best tropes, but because of what happens to Lily. Indeed, it made me want to know whether the heroine's attack was random or personal, and what else would happen to her. Those reasons kept me flipping the pages determined to discover what obstacles she and Dominic had to face on the road to happy ever after.
The dialogue was well-written, and a nice blend of playful and intense. The intense was due to the main characters back stories and what happens to Lily. It's so hard for her not be afraid, especially when her injuries are a reminder of what happened. However, there were some light-hearted moments between Dominic and Lily that had me smiling. They were so close once, and there's no way either of them can forget what they once meant to each other. The incident when they come face-to-face again for the first time in ages made me laugh. Trust Caroline, one of the secondary characters, to do what she did because Noah, another of the secondary characters, won't let her have access to her gun anymore.
Lily was strong, brave and I was glad she was willing to give Dominic a second chance, despite the fact that she was so certain he was going to leave once she was safe. She wants so much for Dominic to prove her wrong, and for him to choose her for once over leaving. That reason also kept the pages turning for me, as I wanted to know whether the hero would finally realize that he was good enough for Lily, and that she would never be happy with another man, which is proven by what happens between her and a man that isn't Dominic.
While the hero, he's been through so much and the fact that Lily needs him is reason enough for him to see that how he's been acting since his near death experience isn't healthy for his recovery. He's also strong and brave, but what I liked most about Dominic was how determined he was to make Lily feel safe and discover the person responsible for attacking her. It makes him feel useful for the first time since his career in the Army ended, and definitely takes his mind off the fact that he doesn't know what he's going to do now that he can no longer be an Army Ranger. Also, I liked the way he is with his sister. They're so close, and the way he handles the fact that one of his best friends and his sister are a couple was amusing.
Hot sex scenes heat up the pages of this story, and prove how much this couple still love each other. Their chemistry is off-the-charts, and the sex scenes, definitely do justice to the strong chemistry they have. Dominic has always thought Lily deserves someone better than him, especially since now he doesn't have a lot to offer. Yet, that's never really mattered to the heroine. All she's ever wanted is someone she can trust. Someone that is willing to fight for their relationship, and give her everything she wants - love, family, happiness.
Overall, Ms. Stone has penned another incredible novel for her Second Shot series where the secondary characters entertained me just as much as the main ones. Caroline is a real hoot, and I liked that she's finally starting to discover that she can trust people other than the ones she already does trust. The way this story ended was wonderful, as Lily managed to trick her attacker and use what she does to her advantage. Also, I enjoyed that the heroine finally got everything she's ever wanted. I would recommend Stirring Attraction, if you enjoy second chance romances. Furthermore, I would recommend reading the first book of this series, Serving Trouble, as it introduces readers to Dominic's sister, Josie and his good friend, Noah.
OVERALL RATING:

When Dominic Fairmore left Oregon to be all he could be as an Army Ranger, he always knew he’d come back to claim Lily Greene. But after six years away and three career-ending bullets, Dominic is battered, broken, and nobody's hero—so he stays away. Until he learns Lily has been the victim of a seemingly random attack. He’ll do anything to keep her safe . . . even go home.

Lily is starting to find a life without Dominic when suddenly her wounded warrior is home and playing bodyguard—though all she really wants is for him to take her. But she refuses to play the part of a damsel in distress, no matter how much she misses his tempting touch. He’ll leave as soon as she’s safe and Lily knows her heart will never heal.
But as attraction stirs to so much more, danger closes in. With more than Lily’s heart at stake, Dominic can no longer draw a line between protecting Lily and loving her . . .
Buy Links:      Amazon | B & N | Google Play | iTunes | Kobo 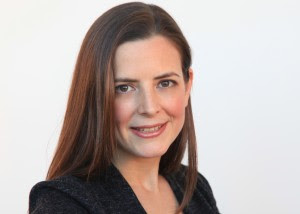