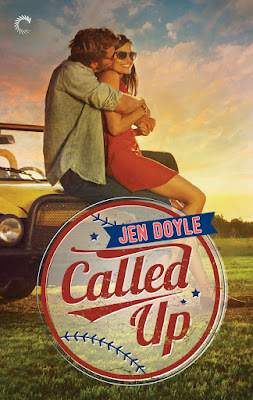 Called Up
A Calling It Novel
By: Jennifer Doyle
Releasing August 29, 2016
Carina Press
+ Add to Goodreads

In Called Up (Calling It #2) by Jen Doyle, Max "Deke" Deacon and Angelica "Fitz" Hawkins are good friends that don't want to do anything to jeopardize their close friendship. However, there's no denying there's plenty of chemistry between them, and soon they find it becoming more and more difficult to deny. The question is - can Deke overcome Fitz's issues towards relationships before they both lose the one person that means so much to them?
Having absolutely enjoyed these two characters in the first book of this series, I couldn't wait to read more about Deke and Fitz, and I've got to say that Ms. Doyle has penned an incredible novel that left me spellbound. In this second novel of her Calling It series, Ms. Doyle has combined well-written dialogue, a plot that never failed to entertain and a wonderful array of characters to create a great story encompassing the friends to lovers trope.
Right from the beginning, I loved the growing relationship between Deke and Fitz. Their playful banter ups the sexual tension until eventually their intense chemistry heats up the pages in some scorching sex scenes that had me cheering for this couple's happy ever after. Would Fitz realize how good a relationship could be? Would she realize that she doesn't have to be alone out of fear for the person she's with leaving her for someone else? Not that she had anything to worry about when it came to Deke because he's quite protective of her, especially when it comes to her facing her past.
Both main characters were compelling, as were the secondary characters in Deke and Fitz's family and friends. I could sympathize with Fitz when it came to relationships, as she didn't have the easiest time in school because of her father's infidelity. Moreover, she's strong and brave with the way she finally faces her past with Deke by her side. If it wasn't for him, no way would there have been the heart-to-heart talk she needed with someone important to her. Also, she's very passionate when it comes to her work, which sounds very worthwhile. While Deke, he's hard-working, a good friend and I liked how protective he is of Fitz. Not that the heroine allowed him to fight her battles, but he would if she'd let him. He's also charming and has a way with words; words that Fitz needed to hear to convince her to take a chance on him.
Overall, Ms. Doyle has again penned an incredible novel that has left me wanting more of the characters from this series. As for the way this story ended, it was perfect, as Deke proves his love with the announcement he makes right at the end of this book. I would recommend Called Up by Jen Doyle, if you enjoy the friends to lovers trope.
OVERALL RATING:

BLURB:
There are two things Max “Deke” Deacon can always count on: his old high school teammates and Fitz Hawkins. But no matter how much Deke might secretly fantasize otherwise, a relationship with one of his best friends is off limits. Until one unexpectedly smoldering encounter has Deke and Fitz looking at each other in a whole new way.
Angelica “Fitz” Hawkins knows for a fact that it is not better to have loved and lost. After losing her parents, she’d rather lock up her heart and throw away the key than endure that kind of pain again. If that means giving up any hope of a lasting relationship, then so be it.
With Deke, Fitz finally feels like she's back in the land of the living. But she won’t risk another broken heart—even if it means saying good-bye to Deke for good. It’s up to Deke to convince her that the safest place she could ever be is right here with him.

A big believer in happily ever afters, Jen Doyle decided it was high time she started creating some. Jen is a member of the Romance Writers of America, as well as a member of the New England, New Jersey Romance Writers and Music City Romance Writer chapters of RWA. She is represented by Sarah E. Younger of the Nancy Yost Literary Agency. She has an M.S. in Library and Information Science and, in addition to her work as a librarian, has worked as a conference and events planner as well as a Communications and Enrollment administrator in both preschool and higher education environments (although some might say that there is very little difference between the two; Jen has no comment regarding whether she is one of the “some”).
Author Links:  Website | Facebook | Twitter | GoodReads