Enter to Win a $25 Egift Card to Bookseller of Choice 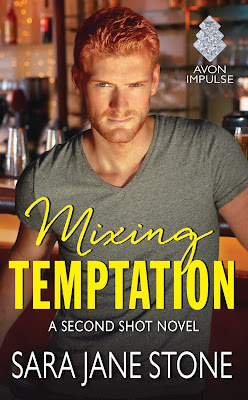 In Mixing Temptation (Second Shot #3) by Sara Jane Stone, ever since the trauma she suffered at the hands of a fellow officer in her career as a marine, Caroline Andrews has been looking over her shoulder waiting for the day she'll be taking into custody for being MIA from her military duty. Even worse, it's hard to trust another man besides the one man that stood up for her. Still, it doesn't stop the handsome Josh Summers from pursuing her. Can she put her past behind her and find comfort in Josh's arms?
Josh Summers hasn't had it easy after the accident that landed him in a coma for a short time, and robbed him of his short-term memory for a little bit. Still, he isn't going to let anything stop him from convincing Caroline Andrews to give him a chance, especially not his siblings concerns and the overprotectiveness of one of Caroline's fellow marines. Will Josh finally convince the woman of his dreams that she can trust him, or will he have to give up on being with Caroline?
Finally, I got to read Josh and Caroline's story, and I've got to say this is the best book of this series so far. The prologue opens the story brilliantly, and I loved how it gave me -- as a reader -- knowledge of the first time this couple met. Over the previous books of this series, I have enjoyed how Caroline has grown and in this story she really blossoms with the way she's ready to move on from the trauma she suffered at the hands of a man she thought she could trust.

As for the dialogue, it was the perfect combination of intense and playful. The light-hearted moments when they're jokingly bantering about superheroes and costumes had me laughing as to did the moments where either the main characters are talking about their growing relationship with the secondary characters. I could understand why Noah was so protective of Caroline after everything she's been through, but at the same time, Josh is a good guy that  proves over and over again he would do anything for her. However, it was the intense dialogue due to both the main characters back stories that I absolutely loved. Josh and Caroline have both suffered traumatic events, so it's good that they've found each other. Josh helps Caroline realize that there are still good men in the world, and that she shouldn't allow her past to keep affecting her future.

Both the main characters were highly entertaining, because of their playful banter and their back stories. Josh is lucky to be alive, and Caroline makes him feel more so. He's confident, charming and I loved how he didn't push Caroline for more than she was willing to give. She needed time to come to terms with her past; become comfortable enough with the hero to realize she can  trust him. The way he joked with her about dating and baked for her made me like this hero a lot, because she needed a man that would take care of her. That would appreciate her for the woman she was instead of trying to take advantage of her vulnerable state.

While Caroline, she really grows throughout this story, and I couldn't wait to see how she would move forward from her past. What would she do about her military situation, considering she was awol from duty? How far was she willing to go to pursue her relationship with Josh? Would she be capable of confronting her past? Really, I found Caroline quite strong and brave with how she deals with her past, even going so far as to help someone in need. Help a woman that she barely knows because she's been in a similar if not the same situation as the woman she aids.

Overall, Ms. Stone has penned another incredible novel for her Second Shot series, which was compelling and kept me entertained from start to finish with its wonderful characters, fast-paced plot and such strong chemistry between the hero and heroine that could not be denied. So much so that eventually their intense chemistry spilled over onto the pages in red hot sex scenes.

The way this story ended left me on hanging on every word, wanting to know how Caroline and Josh would find their way back to each other after what she does to make things right when it came to her military duty. But what I liked most of all was how far Josh was willing to go to help Caroline. What a way to prove how much he loves her, and show her that she can put her faith in him to do things right by her. I would recommend Mixing Temptation by Sara Jane Stone, if you enjoy the friends to lovers trope or stories that contain a vulnerable heroine and a hero willing to do whatever it takes to prove that she can trust him.

BLURB:
In the third installment in Sara Jane Stone's dazzling Second Shot series, a beautiful but broken woman must decide if true love is worth risking everything...including her freedom
After a year spent living in hiding—with no end in sight—Caroline Andrews wants to reclaim her life. But the lingering trauma from her days serving with the marines leaves her afraid to trust the tempting logger who delivers friendship and the promise of something more.
Following an accident that nearly robbed him of his hopes for the future, Josh Summers believes life has given him a second chance. He wants to settle down with the woman who stole his attention and his heart. And he’s willing to wait until she’s ready to be more than “just friends.” When fear of discovery leaves Caroline pretending to be his date, Josh tempts her to try the real thing—a relationship built on trust, not lies.
But then the past threatens and Caroline must risk everything—including her freedom—to bury her demons before she can take a chance on happy-ever-after.