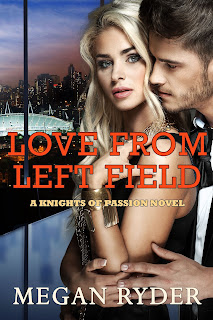 In Love from Left Field (Knights of Passion #2) by Megan Ryder, Miranda Callahan's father is stubborn and doesn't listen to anyone, even his own daughter  when it comes to saving the Georgia Knights baseball team. But when a heart attack puts him out of action, Miranda will do everything in her power to turn things around and save the team she loves. Even if it means working alongside Lucas Wainwright, a turnaround consultant assigned to help. The only thing is, she's not sure whether she can trust him.
I have been looking forward to reading this second story of Ms. Ryder's Knights of Passion series ever since reading the first book, and I've got to say that it does not disappoint. This story encompassing the revenge trope was a little slow to get started, but once the heroine learns the name of the turnaround consultant assigned to help her turn the Knights around and make them profitable, it became compelling, fast-paced and a book I could not put down.

The dialogue was intense due to the main characters back stories, especially that of the hero. He's a complete loner, determined not to get too close to people because of his job and things that have happened in his past. But more than anything, Miranda is the daughter of his enemy and getting involved with her could be risky. Could he take a chance in helping her, even though it went against everything he was working towards in his plan for revenge? Moreover, I liked that there were some light-hearted moments between Miranda and Lucas. The moments they reminisced about when it came to baseball and being at the stadium to cheer on the Knights.

I absolutely loved both the main characters, as well as the secondary ones. Miranda has a tough time with her father, but she's persistent and determined to turn things around for the Knights. No way will she allow her dad to continue to do things his way, not if she can help it. Besides, desperate times lead to desperate measures and trusting Lucas may be her only option to secure the Knights future and for her family to hold onto the team they own. Can she trust Lucas? Will he betray her? The answers to those questions had me glued to every word of this story, wanting to know how things would turn out between Lucas and Miranda because they made such a good couple.

While Lucas, he's hard-working, successful and confident. Yet, I felt sorry for him. He's torn between helping Miranda because their chemistry is so intense and his plan for revenge, and the choice he eventually made in doing what's right versus doing what's wrong made for interesting reading, especially because of what his boss wanted him to do. Also, I liked how he finally began to get close with people again, instead of continuing to be a loner. He needed the growing relationship with Miranda and the loving bond he shares with his mom to make him realize that the choices he made in the past shouldn't affect his chance at love.

Overall, Ms. Ryder has again penned a worthwhile read with sex scenes that were hot and revealed this couple's strong chemistry really well. Both know it's probably not a good idea to get involved, especially when Lucas is so torn between wanting to help the heroine and his revenge, and Miranda doesn't know whether she can trust him, yet their chemistry couldn't be denied. The way this story ended was perfect, as Miranda's dad finally proved that she's worthy of her position and it's palpable that the decision he made was the right one. No way could the Knights continue with her father making the decisions. I would recommend Love from Left Field by Megan Ryder, if you enjoy the revenge trope or sports romance.

She wants to save the Knights…
When Miranda Callahan’s father, principle owner and hands-on dictator of the Georgia Knights, has a heart attack, the responsibility to make the team an independent success becomes solely hers. Though everyone expects her to fail in her new role, Miranda is determined to take her team to the top and earn her father's love and respect on the way. The only other obstacle is the League's consultant – a secret crush from her past – the man trying to take over the team, and the one person who can save them all.
He wants revenge…
Lucas Wainright is a turnaround consultant, hired by the League to save the Knights and so many other teams – only this time it’s personal; before being ousted by Seamus Callahan, Lucas' family had been the owners of the team. Now, he has the perfect opportunity to regain his rightful position with the Knights, if he’s willing to suppress his scruples and his attraction to Miranda Callahan.
Can Miranda and Lucas let go of old grudges and hold on to their new love?