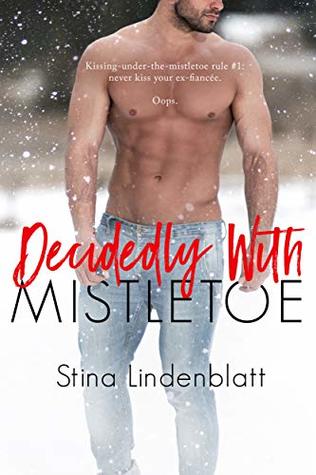 Decidedly with Mistletoe
By the Bay #4
By Stina Lindenblatt
Releasing September 20th, 2018
Self-Published


Ava Versteeg’s plans for the Christmas break include: 1. Drive to Lake Tahoe, 2. Learn to ski, 3. Enjoy hot, earth-shattering sex (and end her sex drought!) and 4. Meet her Forever Love under the mistletoe. Right—the last one was her friend’s prediction, but you never know. What she doesn’t count on is a flat tire, a major blizzard, and for her ex-fiancé, the man who broke her heart ten years ago, to come to her rescue. Oh, damn. While driving back to San Francisco, former Navy SEAL Liam Quade discovers Ava stuck on the side of the road. She’s the woman he was forced to walk away from ten years ago. And now, she’s the woman who would rather be coated with honey and fed to a hungry bear than to be within ten feet of him. Ouch. Liam drives Ava to a nearby inn to wait out the storm…and ends up kissing her under the mistletoe. Christmas magic is in the air and Liam realizes he never stopped loving her. But as secrets from ten years ago start to unravel, Liam has to prove to Ava that he’s worth taking a second chance on. He has to prove to Ava that he’s her forever.

In Decidedly with Mistletoe (By the Bay #4) by Stina Lindenblatt, Ava Versteeg is ready for her holiday, especially since she'll be nowhere near her family that disapprove of the choices she's made for her life. However, getting to her destination of Lake Tahoe proves more difficult than she thought when she gets a flat tire. Luckily, someone comes to her rescue. Except her knight in shining armor just happens to be her ex-fiancé, Liam Quade. Will she give Liam another chance?

I have loved this series from the very first book, but I've got to say that I found this one the most enjoyable because Ava and Liam have quite the past history. The way this story started drew me in immediately and had me liking the heroine right away, as it's understandable why she needs the vacation she's taking. Since her family aren't very understanding. So, why would she want to be treated like a child when she's an adult? Really, I felt sorry for her when it came to the conversations she has with her grandmother and I'm glad she stuck up for herself and didn't give in.

As for the dialogue, it was intense due to the main characters back stories, as Liam broke her heart and it's hard for her to get beyond that. Yet, I'm glad that she did because secrets from the past needed to come to light. Moreover, I really liked the hero. He's confident, charming and I liked how determined he was to win the heroine over, even though that doesn't seem like it's going to be easy in the beginning when they come face-to-face for the first time in so many years. While the heroine, she's feisty when it comes to dealing with her family and sticking up for herself. Why should they get to tell her what to do? She's a grown woman who can make her own decisions. I also liked how resilient and courageous she is in dealing with her family and all that she's been through because of her ex. He is such a jerk that didn't deserve such a kind and caring person as Ava and she's lucky she escaped the relationship when she did. Besides, money doesn't mean anything when you're not happy and I'm glad that Ava fought for her happiness when it comes to both her personal and professional lives.

Overall, Ms. Lindenblatt has delivered a fantastic read in this book where second chances are worth fighting for; the chemistry between this couple was strong; the romance was delightful and special and does this couple's chemistry justice; and the ending had me loving how these two were determined to fight for their happy ever after, especially after what Ava learns to do with her past. However, it was the epilogue that wrapped this story up nicely, as Ava and Liam deserve the happiness they've found after the secrets and lies. I would recommend Decidedly with Mistletoe by Stina Lindenblatt, if you enjoy second chance romances; Christmas themed stories; or books by authors Erika Marks, Jane Diamond, Emma Hart and Rachel Lacey.