REVIEW: LOVE UNDER THE HOT LIGHTS by MK MEREDITH 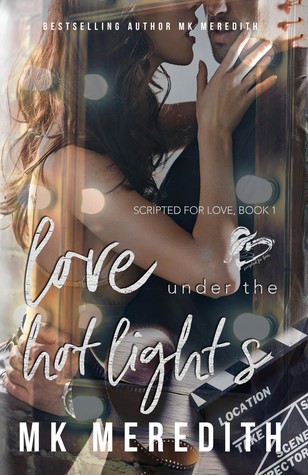 Hollywood screenwriter Samantha Dekker spent the last year picking up the pieces after her husband's suicide. Along with grief, guilt, and tabloid hell, she's had to watch helplessly as the film industry slammed its doors in her face. Now Sam has the rarest of Hollywood opportunities—a second chance…working with the one man she swore never to see again.Sexy A-lister Gage Cutler knows that Sam blamed him for his part in her husband's death. Still, Sam is the one woman he can never forget. All he wants is a second chance of his own—to prove he's not the player she remembers. And Malibu is the perfect backdrop to make a girl swoon.Except they're not alone. Someone is watching Sam and Gage's steamy off-screen romance with the most dangerous of intentions…

In Love Under the Hot Lights (Scripted for Love #1) by MK Meredith, Samantha Dekker is looking to get back to her career as a screenwriter after taking a year off to grieve. But she never imagined she'd have to work with the sexy Gage Cutler, the man she blamed for her husband's death. Still, she's determined to make a go of the second chance she's been given. Will Gage be able to convince Samantha to take a chance on him or will her trust issues ruin any chance they could have together?

MK Meredith is such a talented writer and this first book of her Scripted for Love series is an enthralling, fast-paced, extremely interesting read where these enemies face some tough obstacles to be together such as the horrors of Hollywood, the lies spread and the heroine blaming the hero for what happened to her late husband; and the dialogue was intense due to the main characters back stories and everything these two go through on their journey to happy ever after. Will Samantha be able to let go of the past and put her trust in Gabe?

With the main characters, I couldn't help but sympathize with the heroine because her in-laws are completely horrible and deserve whatever Samantha decides to do in order to make sure their harassment stops. Moreover, I also liked her resilience when it came to dealing with everything that's happening on set and someone determined to ruin her career. Why is someone trying to send her packing? Yet, what I liked so much about the heroine was that she gave the hero a chance, even though being with a Hollywood A-Lister scares Samantha because she doesn't want what happened with her husband to happen to her again. He turned her life upside down with what he did and it was hard to handle the mess he left behind. How could her late husband have been so selfish?

While the hero, he's strong, confident, determined to fight for what he wants in his life and what he wants is Samantha and I liked his willingness to show her that he doesn't care what Hollywood says about them. If it hurts his career, it hurts his career. She's worth more to him. I also liked the close relationship he shares with his family because his sister's advice goes a long way to the decisions he makes when it comes to giving Sam the time she needs to get used to what everyone thinks of them being a couple. Will he be able to handle the challenges he faces with Sam to win her over?

Overall, Ms Meredith has delivered a well-written and heartfelt read in this book where the chemistry between Gabe and Samantha was powerful; the romance was absolutely passionate and does justice to the strong chemistry these two have; and the ending had me loving this couple's determination to fight for their future together. Yes, Hollywood can be nasty, but it doesn't mean that a relationship can't work. They just have to be willing to make it work. I would recommend Love Under the Hot Lights by MK Meredith, if you enjoy Hollywood romances, the enemy to lovers trope, second chance romances or books by authors Marina Adair, Catherine Bybee, Jennifer Probst and Sarah Robinson.