BLOG TOUR - REVIEW & GIVEAWAY: A CHRISTMAS MIRACLE FOR THE DOCTOR by VICTORIA JAMES 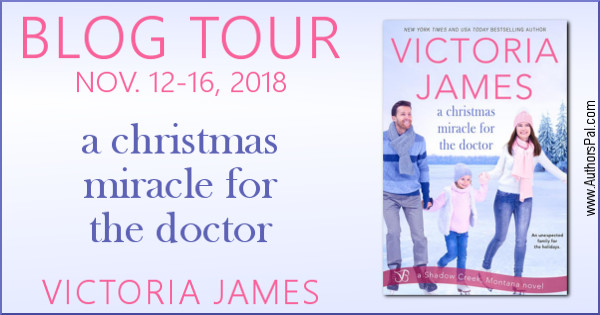 Fall in love this holiday season with this heartwarming story about finding romance, the magic of Christmas, and the importance of family...

Children's bookstore owner Addie Mayberry believes in the magic of Christmas. Or at least, she used to. So when a young customer needs some seasonal optimism, Addie sets out to give the vulnerable, heartbroken little girl the best Christmas ever. Which means helping the hottest man in Shadow Creek, Bella's surgeon father, find his holiday spirit. Addie's up to the challenge, but between tree decorating and late night talks, she realizes she's starting to fall hard for the one man she definitely shouldn't.

Drew Barrett drastically changed his fast-paced life when he moved back to Shadow Creek, but it was all worth it to give his daughter a better life. He wasn't exactly winning dad-of-the-year awards before, so he's determined to make it up to Bella. And with Addie's help, he's slowly repairing his relationship with his daughter. The last thing he wants is to fall in love, since that road only leads to pain, but he can't stop thinking about Addie. Not only is she gorgeous, sweet, and great with Bella, she fills something in him he never knew was missing. But Addie wants forever, which is more than Drew can offer…

In A Christmas Miracle for the Doctor (Shadow Creek #6) by Victoria James, Drew Barrett moved back to Shadow Creek to make a better life for him and his daughter after the child's mother decided she wanted out of their lives. Determined to concentrate on his daughter, he's decided he doesn't have time for a relationship. However, spending time with Addie -- a woman his daughter adores -- he begins to find it harder and harder to keep his distance. Will he take a chance on happy ever after again or will he break Addie's heart?

I have loved this series from book one, but I found this story taking me a while to fully get into, even though I absolutely adored the hero's daughter. Really, there was something about the heroine that made her feel a little too good to be true, especially with the hero's daughter, Isabella, having grown so attached to Addie. Yet, the more I read about the heroine, her flaws and her back story the more I warmed up to her. Life hasn't been easy and I could understand why she's so protective of Isabella when it comes to what the young girl is facing at school. However, it was from the moment the hero and heroine come face-to-face for the first time where this story really takes off, as it's palpable the heroine really likes the hero. Will the hero give another relationship a chance?

As for the dialogue, it was intense due to the main characters back stories, what's happening with the hero's daughter that gets Addie so worked up and everything these two go through on their journey to happy ever after that had me wondering whether the hero would take a chance. Moreover, there were moments where the heroine's insecurities frustrated me and I wanted to shout 'listen-to-your-sisters'. Yet, I've got to admit that I could understand why she has them after what happened to her back in school and what makes her fight so hard for the hero's daughter.

While the hero, he was fantastic. I loved the bond between him and his daughter as well as the bond between the heroine and the little girl. They each are willing to do whatever it takes to make the hero's daughter's life a happy one. I also liked the hero's determination not to hurt the heroine. He's so considerate of Addie's feelings, especially with all that she's been through. Not only with high school jerks, but knowing she's not good enough in her mother's eyes too. Really, her mother is a piece of work that doesn't deserve to have such wonderful daughters in Addie and her two sisters.

Overall, Ms. James has a delivered a really good read in this book where the chemistry between this couple was strong; the romance was sweet; and the ending had me loving the hero's determination to win the heroine's heart. Really, Addie has become important to him and he can't let her get away. I would recommend A Christmas Miracle for the Doctor by Victoria James, if you enjoy the opposites attract trope, Christmas themed stories with happy endings, or books by authors Sonya Weiss, Jennifer Hoopes, Jennifer Shirk and Joann Sky.

Victoria James is a romance writer living near Toronto. She is a mother to two young children, one very disorderly feline, and wife to her very own hero. Victoria attended Queen’s University and graduated with a degree in English Literature. She then earned a degree in Interior Design. After the birth of herVi first child she began pursuing her life-long passion of writing. Her dream of being a published romance author was realized by Entangled in 2012. Victoria is living her dream— staying home with her children and conjuring up happy endings for her characters. Victoria would love to hear from her readers! You can visit her at www.victoriajames.ca or Twitter @vicjames101 or send her an email at Victoria@victoriajames.ca.