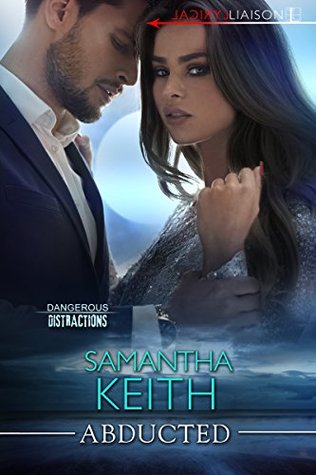 In Abducted (Dangerous Distractions #1) by Samantha Keith, Cal Hart earns a living by taking contracts from the highest bidder. However, when he takes a contract to kill Lana Vanderpoel, he knows there's no way he can go through with it. So, instead, he decides to kidnap her while trying to hunt for the person that put the hit out on her. But when the truth comes out, will Cal be able to protect Lana or will they lose their chance at happy ever after?

What an exciting, fast-paced, engaging read Ms. Keith has delivered in this first book of her Dangerous Distractions series where the main characters -- especially the heroine -- go through a lot, as they try to get to the bottom of who wants Lana dead. How long will it take for Cal to discover the truth? Will he be able to keep Lana safe in the meantime? The way this story starts sets the fast-pace of the story and I loved the moment these two meet, as Lana doesn't make things easy for Cal. Then again, what person being kidnapped would make things easy for their kidnapper, even if they are kidnapping them for the right reasons?

As for the dialogue, it was intense and riveting due to the main characters back stories and everything these two go through on their journey to happy ever after. There's danger, intrigue and surprising twists that had me worried for the heroine's safety. Still, Cal is good at his job and I liked how far he's willing to go to protect Lana. Moreover, the heroine is resilient, courageous and I liked that she put her trust in Cal, especially after how they meet that gives her no reason to trust him. While the hero, I loved how driven he is in his pursuit of finding the person responsible for wanting Lana dead. I also liked how determined he is to protect Lana because the person wanting her dead could be anyone. Maybe even someone she thinks she can trust.

Overall, Ms. Keith has delivered a really good read in this book, which had a good dose of suspense and where the chemistry between this couple was strong; the romance was delightful; and the ending took me by surprise when the person who wants Lana dead was revealed? Why do they want the heroine dead? However, it was the epilogue that wrapped this story up perfectly, as Lana and Cal both surprise each other with something that will bring more happiness to their lives. I would recommend Abducted by Samantha Keith, if you enjoy romantic suspense or books by authors Kari Lemor, Kendall Talbot, Desiree Holt and Karen Rock.

In a high-stakes world of privilege, betrayal, and the sexy thrill of the unknown, you never know where a dangerous distraction will lead . . .
Cal Hart walks a blurred line of honor. The rock-hard former Marine has his lethal skills at the service of the highest bidder. Until a contract comes in to kill Lana Vanderpoel, the sultry, charismatic heiress and billionaire’s daughter. She’s way too sexy to end up at the wrong end of a silencer. So Cal takes the job—and starts planning how to get Lana to safety while he unearths who’s behind the threat . . . Lana only knows she’s been kidnapped—and she’ll fight tooth and nail against whoever has snatched her from her life. Her stern-faced captor sends a tremor of ice through her veins, yet a thrill lies beneath her unease. He’s dark and dangerous, his body ripped, honed, and capable. But lust isn’t the same as trust—and whether or not she can believe what Cal’s telling her, there’s at least one person close to Lana who wants her dead . . .