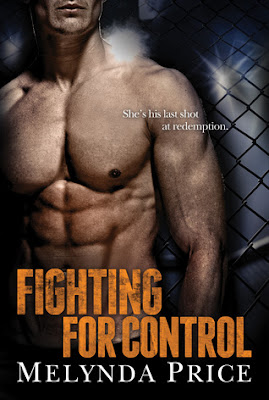 In Fighting for Control (Against the Cage #3) by Melynda Price, if there's one way Nikko Del Toro knows how to keep his demons at bay, it's fighting in the cage. But when he loses control at the most inopportune moment, things go from bad to worse. Because he's not only facing the threat of losing his chance to fight, but he's also forced to see a shrink. How can he talk about what's really bothering him with the woman he hasn't been able to stop thinking about since their one-night stand?
Dr. Violet Summers can't believe she propositioned a man to help celebrate her divorce. Even more, she hadn't regretted the decision until now. However, her choice six months ago has made things complicated now that she finds Nikko is her newest patient. Can she help him, or will she lose everything she's worked so hard for?
I have enjoyed every book of this series so far, and this one was no different. Ms. Price has penned another incredible story that was highly emotional and captivating due to the main characters back stories as well as the obstacles this couple face such as the threat to Violet's career and the possibility that Nikko could lose control again if he isn't allowed to train.
As for the dialogue, the playful banter between Nikko and Violet was very entertaining, and every moment they conversed increased the sexual tension between them. However, the dialogue was also intense. The hero finds it hard to talk about his time in the military, because his memories aren't good ones. He had to make a terrible choice, which made me feel sorry for him because, of how that decision haunts him.
I really liked both the main characters. Violet is strong, brave and tenacious. Her decision to proposition Nikko was -- by far -- the best decision she ever made, even if it did complicate her life. Indeed, I felt sorry for her with everything she went through with her ex-husband. He's a master manipulator, and will do anything to get his way. Yet, being with Nikko is so different. He's everything her ex-husband is not, even if he does believe he's damaged beyond repair.
While Nikko, he's had a difficult past and Violet is good for him. He's brave, arrogant, and protective. It's not easy for him to open up, no matter how much he believes he can trust Violet. He blames himself for what  happened, although there didn't seem to be any other option than what he did to get him and the rest of his team home safe. He's also a very good father, and would do anything for his daughter.
Scorching sex scenes heated up the pages, and illustrated this couple's strong chemistry from the very beginning. Violet propositioning Nikko was a fantastic idea, because it not only helped her to celebrate her divorce, but it also helped him because of where they were in their first time together; a place where the physical intimacy helped to calm Nikko's nerves.
Overall, Ms. Price has again proven she's a pro when it comes to writing MMA fighting heroes and couples that need each other to heal from the hurts of their pasts. I loved the way this story ended with the epilogue. Nikko was finally able to let go of his past by confronting it, do what he thought was best for his daughter, and finally make his relationship with Violet much more. The present he gave her showed how important she was to him. I would recommend Fighting for Control by Melynda Price, if you enjoy sports romance, or couples that have to overcome some very tough obstacles (including manipulative exes) to be together.
OVERALL RATING:

BLURB:
For Nikko “the Bull” Del Toro, an ex-marine turned MMA fighter, only two things quiet the demons raging inside him—facing an opponent in the cage…and the memory of his hottest one-night stand. But when his PTSD resurfaces, causing him to lose control at a CFA press party, it’s his career that may be KO’d.

Dr. Violet Summers is stunned to discover her newest patient is the man who rocked her world—and put her heart in a clinch after her nasty divorce. She’s determined to delve deep into the darkness that haunts him and to keep all further encounters strictly professional.

Nikko doesn’t want a shrink. What he needs is Violet. With the memory of their passion blazing between them, it’s only a matter of time before they give in to desire. Can Violet help save this surly fighter from his own personal nightmare? Or will he forfeit his career and his last chance at love?
BUY LINK: Amazon