Enter to Win the Grand Prize winner of $25 gift card to a retailer of the winner’s choice, or two additional winners to receive eBook copy of FOREVER THIS TIME 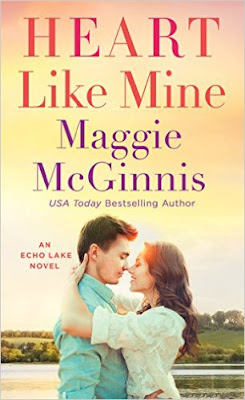 Heart Like Mine
Echo Lake #2
By: Maggie McGinnis
Releasing April 5, 2016

In Hearts Like Mine (Echo Lake #2) by Maggie McGinnis, Delaney Blair knows it's going to be tough to bring the budget of Echo Lake's Mercy hospital's pediatric unit into line, but someone's got to do it. Unfortunately, the hard task has landed in her hands. Her plan -- to strategize with the interim head of the department, Dr. Joshua MacKenzie and see what they can come up with. But when he challenges her to spend time on the ward, she's reluctant at first, yet knows that what he's asking may be necessary, if she's to meet the amount she's being forced to cut the budget down to.
The pediatric department of Mercy hospital is already struggling to stay afloat on the budget they have, but when Dr. Joshua Mackenzie learns that the hospital are looking to cut further into his budget, he decides that desperate times call for desperate measures. To prove that the pediatric department need all the money they can get, Joshua is going to show Delaney just what it takes for the unit to run and why everything in the budget is necessary.
From start to finish, this book was incredible and weaved a spell that drew me immediately into the story due to the two incredible main characters, some rather compelling dialogue and the challenges this couple had to face on their journey towards happy ever after. Working temporarily in pediatrics isn't something Delaney wants to do, because it'll bring back painful memories, yet she needs to see how the ward struggles while trying to make tough decisions.
As for the dialogue, I really enjoyed both characters and loved the moments between Joshua and Delaney. The heroine is strong, brave, and tenacious. Being in pediatrics is not easy for Delaney, but it gives her purpose. Gives her the inspiration to maybe change her career, to follow the dream she had long ago before she believed she couldn't be a doctor like her father. Yet, what I liked most about her was the interactions she had with the kids on the ward made me smile. Those interactions really made a difference, not just for the kids she helped but for her as well.
While Joshua, he's hard-working, confident and tenacious in his attempt to get the heroine to see things from his point-of-view. He loves his job and is good at it. His staff respect him, which is proven through the dialogue, as the staff -- at first -- are determined to push Delaney to her limits while she's on the ward. The kids he treats are important to him, and he doesn't want to lose any of them. A consequence that could happen, if he didn't have enough funding or staff to treat his patients.
From the moment Joshua and Delaney meet, the chemistry between them is intense and eventually explodes onto the pages in hot sex scenes. Neither of them want a relationship because Joshua is too busy with his work, and Delaney has her reasons. Such as knowing getting involved with him could jeopardize her job and she doesn't want to get involved with someone that puts their job before her. Yet, there's no denying their feelings for each other when they're working closely beside the other, especially when Delaney shows Joshua just how much she cares by befriending the kids on the ward.
Overall, Ms. McGinnis has penned an incredible novel in this one, and it has made me eager to read the first book of this series. The story ended really well with Joshua finally realizing that he wants Delaney, no matter the fact that she tried to push him away to save both their jobs. Plus, the way he proposed was impressive. What a tasty treat to find an engagement ring in. I would highly recommend Hearts Like Mine by Maggie McGinnis, if you enjoy small town romances, or a couple that are destined to be no matter how hard they fight the strong chemistry that exists between them.
OVERALL RATING:

BLURB:
Delaney Blair loves her job at Echo Lake's Mercy Hospital, where she's developed a reputation for being smart, fair, and driven. When she's assigned to cut funding, she has to temporarily relocate her office, put on borrowed scrubs, and go toe-to-toe with Dr. Joshua Mackenzie, the interim head of the pediatrics department. His killer smile and rock-star body are distractions Delaney could do without, but she's determined to stay focused while she brings his budget into line.

Beloved by his colleagues and patients alike, Josh is too busy caring for sick kids to talk numbers with the sexy, stiletto-clad Delaney. Every time they talk business, tensions run high…but so does a powerful attraction neither of them can ignore. When an emergency brings Mercy to its knees, Delaney and Josh must work together to save lives. But can they also find a way into each other's hearts?
Buy Links:      Amazon | B & N | Google Play | iTunes | Kobo

“You’re just going to have to go down there, Delaney.” Megan propped a hip on Delaney’s desk two days later. Delaney envied her assistant’s long skirt, gypsy earrings, and long, loose cotton blouse. In college, she’d have topped it off with a head scarf and combat boots, but for the workplace, she’d gone with her standard-issue leather sandals.
Delaney looked down at her own outfit and wondered when she’d turned into a toned-down version of her country club mother. Her neatly ironed blouse was set off by a perfectly matched skirt and jacket, and as she fingered the pearls at her throat, she sighed. Then she let her eyes coast down her calves, down to the Jimmy Choos she’d bought just last month. It was her splurge, her bow to girliness and inappropriate spending, and damn, she loved these shoes.
She really did need to ditch the pearls, though.
“I can’t just go down there, Megan.” Delaney felt a tingle at the base of her neck, just thinking of walking onto the pediatric floor. No, she definitely couldn’t go down there.
“Well, he’s obviously not coming to you.”
“How can he just ignore my messages like this? It’s downright rude.”
“Or he’s downright busy. Have you seen the bed count on pediatrics this week?”
“No.” Delaney cringed. It wasn’t the kind of thing she kept track of on a daily basis.
“There is always the possibility that he’s not intentionally ignoring you. Just saying.”
“I’ll check.” Delaney clicked into the system that listed current inpatient numbers. When she got to the pediatric floor, her eyes widened. “Holy—”
“Exactly.” Megan raised her eyebrows.
“We don’t even have that many pediatric beds.”
“I know. They had to move a couple of the teenagers up to adult floors to make space.”
Delaney clicked back through the past month, and the patient counts went up and down a little bit, but not much.
“I’m just saying—this could be why Dr. Mackenzie hasn’t called back.” Megan leaned close to Delaney and plucked open her top button. “Which means you, third floor, this afternoon. He’s clearly isn’t coming to you.”
Delaney felt the chills creep down her spine. She had never actually been on Mercy’s pediatric floor—had never been on any pediatric floor—not since Parker had died.
“Delaney? You okay?” Megan’s brow creased as she studied Delaney’s face. “You are six shades of white, girl. Does talking to non-executive-suite people make you this scared?”
“No.” Delaney’s voice came out in a whisper.
“Oh.” Megan’s hand flew to her mouth. “Oh, God. I’m sorry.” She squeezed her eyes shut. “I’m so sorry. I wasn’t thinking.”
Delaney nodded slowly. “It’s okay. It’s been—a long time since he died. Not like you would think of it.”
“But I should have. I’m really sorry.” Megan tried to look into her eyes, but Delaney’s felt all shifty. “Do you want me to go with you?”
“No, Meg. I don’t want to go at all.”
“But—”
"I know. He’s not coming to me.” She took a deep breath, blowing it out slowly. Maybe it wouldn’t be horrible. Maybe she wouldn’t melt into a panic-puddle at the elevator doors. Maybe she wouldn’t see Parker everywhere she looked.
Maybe pigs flew. 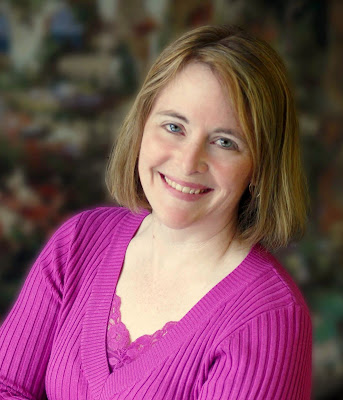 
USA Today bestselling author Maggie McGinnis is a Golden Heart Finalist who lives in New England, vastly outnumbered by both children and cats. She writes sweet romances set in Montana and Vermont, and feels extremely fortunate that through her books, she gets to fall in love every single day. She's a sucker for romantic comedies, popcorn, and the perfect green pen, and if she wasn't an author, she'd totally be rocking a Nashville club in her pink cowgirl boots. It's probably good that she embraced the author thing, because her singing skills are better suited to the shower, and really? Pink cowgirl boots?