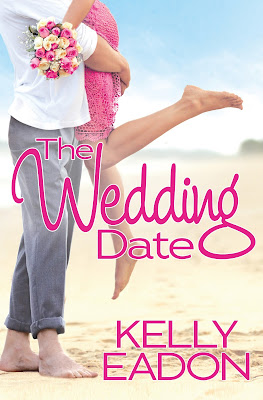 The Wedding Date
By: Kelly Eadon
Releasing April 5, 2016
Forever Yours
+ Add to Goodreads

In Wedding Date by Kelly Eadon, all Kate Massie wants is to work her way into her dream job as a lawyer prosecuting child abuse cases, but with the economy not doing so well, the only job she's managed to get is working as a clerk for a judge. However, it seems her dating life might be taking a turn for the better when she runs into the young man that once took her to the junior prom, James Abell. Except he's totally changed from the shy boy he was into a handsome, confident man.
What a delightful, fast-paced, riveting read Ms. Eadon has written, encompassing the fake relationship trope, a heroine determined to achieve her dream, and a hero desperately in need of a date to his sister's wedding to get his mother off his back. I really liked how this story started with what happens to the heroine in the elevator amongst her work colleagues. What a ringtone her phone has.
As for the dialogue, the secondary characters certainly know how to put the hero and the heroine on the spot. They want this couple to be happy, especially Jame's friends and they think the heroine is perfect for him, would fit in with his family and win over his mother. Then there's the playful banter between James and Kate as well as the main characters and different members of the Abell family. The competitiveness of James and his brothers made me smile or laugh, because it seems to bring fun to Kate's life just as much as the men's.
I really liked both the main characters as much as the secondary ones. The Abell family could be a bit much at times for Kate, but I liked how she fit in with them. They treated her like family, which was surprising the way everyone talked about his overbearing mother. Kate is strong, brave, independent. But what I liked most about her was her willingness to help James because he needed her. Not just because of his mother, but because of his ex; a woman that doesn't know how to let go. His ex seems to use him all the time; to help decrease her stress since she's shy and doesn't like crowds. Yet, now that Kate has come into his life, he realizes he can't continue to help her.
While James, he's kind and caring. He's tired of his mother constantly annoying him about his love life. What business is it of hers. He can find his own woman. Just not his ex. That is finally over, and there's no going back to her. Knowing his ex needs to find a way to help herself, instead of using people to help with her condition. Luckily, his ex surprises him with her decision to get help.
Overall, this was a really good book where the couple's intense chemistry, which was there from the moment they came face-to-face again, for the first time in years, spilled over onto the pages in hot sex scenes. Kate is uncertain whether she's ready for a relationship, considering her stay in town is only supposed to be temporary. Yet, spending time with James has her falling hard for him. He's everything she'd want in a man if she was looking for a chance at happy ever after.
Ms. Eadon wrapped this story up nicely, despite the fact that they both reacted badly when James discovered the name of the heroine's ex-boyfriend. Apparently, her ex's father and James's dad are at odds due to business. However, the epilogue shows this couple are meant to be and that Kate is really good and happy at her new job. I would recommend Wedding Date by Kelly Eadon, if you enjoy the fake relationship trope, small town romances, or stories where a tight-knit family and the couple's friends want happiness for someone they care about, so they're determined to match-make.
OVERALL RATING:

A LITTLE FAKE RELATIONSHIP NEVER HURT ANYONE . . .
Kate Massie has big dreams-they just haven't worked out. Yet. In the meantime, she spends her days clerking for a judge and her nights fantasizing about her tall, dark, and sexy gym crush. So when she runs into him one night, she's shocked to realize he was her shy, nerdy junior-prom date. But that isn't where the surprises end . . .
James Abell needs a date to his sister's wedding. So when Kate agrees, he's relieved . . . until one little lie turns their wedding date into a full-blown fake relationship. Only it doesn't feel fake-not the toe-curling kisses and definitely not the electricity. Neither of them is looking for something real . . . but they just might fall for their own little white lie.

Kate stared at herself in the mirror.
This is just pretend.
What was wrong with her? She’d spent all week fortifying her internal defenses. When he’d offered to bring her dinner or keep her company, she’d assured him Beth was taking good care of her. Now, with only a few words from Margaret, she’d let herself slip back into fantasy.
A fantasy where she could kiss James whenever she wanted. Where his strong arms held her at night.
A tremor passed through her.
No! She was stronger than this. She needed to convince his family and the other guests they were dating, not herself. She tore her eyes from the bathroom mirror and unzipped the garment bag that hung from the shower curtain rod.
She shimmied into the blue lace dress.
She had to admit, Ainsley had been right about it.
The fabric skimmed over her body and showed precisely the right amount of leg. Or it would, once she got it zipped. She twisted and turned and wiggled, but couldn’t reach the zipper.
Crap. She had to ask James for help.
She took a deep breath and knocked on the door leading back to the hotel room.
“I’m dressed.” His deep voice sent goose bumps over her skin.
She cracked the door and poked her head through. “I hate to ask you this, but I’m stuck. I need you to zip me up. Please.”
He kept his attention on the cufflink he was hooking through his button hole. “Sure.”
She only hesitated for a moment before she stepped from the bathroom and spun, to give him access to her back.
There was a zipping sound as his fingers skated over the fabric.
She exhaled sharply. There. It was over. She turned back to him. “Thank you. I’ll be ready in one minute. I have to find my necklace first.”
“You look amazing.” James' voice caught as he stared at her, his eyes a vivid, brilliant gray.
Kate couldn’t tear herself away from him. His gaze pierced her, suspending her in time and space.
He stepped toward her, curled his palm around the back of her neck and lowered his mouth to hers. A delicious tingle surged through her blood and down to her toes as their lips met. He snaked his other arm around her waist and pulled her against him as his tongue swept into her mouth.
She tilted her head back and gave herself over to him, reveling in the feel of his lips against hers. His kiss turned rougher, more urgent. Her knees went weak and her head swam as she clutched him.
Her tongue tangled with his, matching him stroke for stroke. All rational thought fled her mind and she was engulfed in a cloud of James: his smell, his taste, his touch.
He pulled back for a second and his eyes glinted as he traced his thumb over her cheek. Then he tightened his grip around her waist and took the fullness of her lower lip in his mouth. A tiny moan escaped her as he sucked gently. With every stroke of his tongue, her body melted further into his. His fingers dug into her back and she could feel his heart pound through his dress shirt.
A knock sounded on the door and she stepped back abruptly, breaking the kiss.
His eyes burned with an intensity that sucked all the air from her lungs. She shifted her gaze to the floor.
No one had ever kissed her like that. 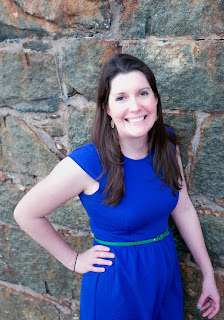 ABOUT THE AUTHOR:
Kelly Eadon is a romance writer living in Richmond, Virginia with her husband and a house full of rescue animals, aka "the kraken". She swears like a sailor and says whatever pops into her head. In order to counteract her big mouth, she wears high heels whenever possible. In her spare time she spins, kick boxes and attempts to renovate her farmhouse. She hates sanding drywall, loves to cook, drinks lots of wine, gets scary competitive at trivia, and enjoys time spent exploring with her rescued beagle mixes.
Author Links: Website | Facebook | Twitter | GoodReads

Email ThisBlogThis!Share to TwitterShare to FacebookShare to Pinterest
Labels: 4.5 Stars, Forever Yours, Review