REVIEW: NEED YOU FOR MINE by MARINA ADAIR 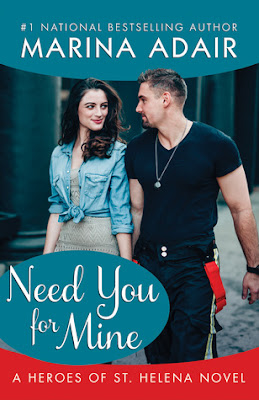 Need You For Mine
Heroes of St. Helena #3
By: Marina Adair
Montlake Romance
Released March 29th, 2016
+ Add to Goodreads

In Need You for Mine (Heroes of St. Helena #3) by Marina Adair, there are times when Harper Owens believes she'll never find a man that sees her as more than a friend. That is until Adam Baudouin gives her a much-needed confidence boost. She knows flirting with him could be dangerous, and agreeing to be his girlfriend could be even more so. Yet, if it helps them both get what they want, it would be worth it. Except what happens when their relationship runs its course? Once Adam secures his promotion and Harper saves her family's lingerie shop. Do they go their separate ways, or are they both willing to fight for the chance at forever?
This is the first book I've read by Ms. Adair, but I've got to say that it won't be my last. Right from the beginning, I was drawn into this story, as there seems like there's no hope for Harper to ever find a man to have a relationship with. Yet, the moment Adam was introduced, this story became so much more and I found the pages just flew by. The hero's smugness and the heroine doing her best to resist his charms sets the fast-pace of this book for me, because I wanted to know how long she could resist him for. Since I was certain it wouldn't take long, considering they both need each other to achieve their dreams.
Both main characters were compelling, and the dialogue between them was well-written. Adam is quite charming, and determined to prove to Harper that she's the type of woman men would want a relationship with. The sweet-talking he does at the beginning to Harper and how he aids Harper in saving the Boulder Holder -- her family's lingerie shop --  made me smile. Would she fall for his charms in that moment or not? He's also a good guy despite his Casanova reputation. The way he helps one of his fellow firefighters proved that, even if it did make his superiors more annoyed with him and could decrease his chance at a promotion.
While Harper, she's strong, brave and tenacious. She would do anything to save her family's lingerie shop, and if that means being in a fake relationship with Adam and lying to those closest to her, then she'll do it. But using each other to get what they want makes it hard for Harper to remember that their relationship is fake, especially when the town's residents come up with a super couple nickname for them as well as continuing to put them in situations where they're in each other's company.

Hot sex scenes heated up the pages at just the right moments in this story, and illustrated the amazing chemistry this couple had from the moment they come face-to-face; a moment where the heroine does her best to deny the instant attraction she has for the hero, yet he's too charming to resist.

Overall, this book has given me a new must-buy author, and I can't wait to read more of Ms. Adair's work in the future. The story was wrapped up nicely with what Adam did for the heroine to save her family's shop. I would recommend Need You for Mine by Marina Adair, if you enjoy Casanova heroes that finally find the woman they're meant to be with.
OVERALL RATING:

BLURB:
Every red-blooded male in St. Helena wants Harper Owens…as a friend. Despite her efforts at seduction, Harper seems to be destined to end up alone. The only guy with a knack for unleashing her inner vixen is firefighter and resident rule-breaker Adam Baudouin. Agreeing to a faux-mance could help him secure a promotion—and save her family’s lingerie shop, the Boulder Holder. But playing with fire has consequences. Especially when the flame comes courtesy of St. Helena’s own Five-Alarm Casanova…
None of Adam’s quick-and-easy hookups have prepared him for a connection this extraordinary. There’s more to the milk-and-cookies art teacher that he’d love to explore. But first he has to convince her to trust the town’s most notorious playboy. Even tougher—he’ll have to trust himself to be the real-life hero this warm and sexy woman deserves.
at 22:16