Enter to Win a Montana Moonstone Necklace and print copies
of the previous books in the Montana Men series:
AT WOLF RANCH, WHEN IT'S RIGHT,
HER LUCKY COWBOY, and STONE COLD COWBOY 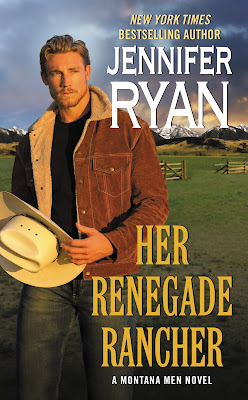 In Her Renegade Rancher (Montana Men #5) by Jennifer Ryan, believing he wronged Luna Hill when he kissed her while she was in a relationship with his best friend, Colt McKendrick has done his best to avoid the gorgeous woman, even though she's best friends with his brother's fiancé. But now, the time has come for him to finally see if they have a chance. Can he convince Luna that she should take a chance on him?
Luna Hill shared a special friendship with Wayne, the older gentleman that visited her at her work. She cared for him like a second father, and takes his death hard. Harder than his cold-hearted family that didn't care about him as much as they cared about his money. At the reading of the man's will, Luna's whole life changes. But just as she's beginning to handle the changes and find a way to be with the one man she wants to be with, a threat surfaces. Can she keep herself and Colt safe, or will she lose everything?
Having been introduced to this author and this series through the previous book, Stone Cold Cowboy, I couldn't wait to read Colt's story and I've got to say that it does not disappoint. Right from the beginning, the fast-pace of this story is set by Wayne's relationships with his family and with Luna. How could Wayne be interested in someone so young? Why was he spending so much time in her company? It wasn't hard to figure out the answers to those questions with the way Wayne's sons treated him and how Luna did. She was warm and genuine while Wayne's sons were all about themselves.
As for the dialogue, it was intense due to the main characters back stories, their past history and the nightmare of events this hero and heroine face all because of a family's greed. However, there were some really good light-hearted moments between the main characters, as well between them and the secondary characters that had me smiling. Luna's best friend, Sadie, as well as Wayne gave the heroine the best advice when it came to Colt. Of which, I'm glad that she listened because they felt like a couple meant to be. That nothing and no-one should stop them from begin together.
Both Luna and Colt had me hooked, not only because of their growing relationship and how protective both of them are of each other, but because of everything that happened between them in the past as well as now in the present. Luna is strong, brave and I liked how determined she was to do right by Wayne's legacy. Indeed, she was the right woman for the job, even when things got too dangerous. Also, I liked how much she loved her family, especially her brother. Their bond was a special one, and doing what was right for him was important.
While Colt, he's kind, caring, confident and I liked how protective he was of Luna when things became dangerous. He wasn't about to let anyone come between them, no matter how much his life was at risk. What happens to him totally shocked me, as I didn't think any of Wayne's family would go that far to hurt Luna, but I'm glad he did everything in his power to convince Luna that nothing would stop him in making her his. Also, I enjoyed the close relationship he had with his family. Colt's grandfather and his brothers also give great advice that it was no wonder Colt listened.
Overall, this was another great addition to Ms. Ryan's Montana Men series where the sex scenes were hot and filled with plenty of passion. Colt and Luna are so right for each other, and I'm glad that they finally patched things up. Why either of them thought they were in the wrong when it came to their original kiss in the past was beyond me. Because clearly, it wasn't anyone's fault. It was a long-time kiss coming that they both wanted.
The way this story ended with how Colt and Luna cement their relationship to finally put a rest to the danger had me cheering, because obviously they couldn't continue to let Wayne's family win. Furthermore, the epilogue was absolutely wonderful, as Luna continued to do what's right by Wayne's legacy. She's lucky to have been able to change the life of someone important to the man she thought of as a second father. I would recommend Her Renegade Rancher, if you enjoy romantic suspense or second chance romances.
OVERALL RATING:

Colt Kendrick knows one thing about a small town, you can’t avoid anyone for long-especially a girl he crossed the line with and is best friends with his brother’s fiancé. Luna could have been the one if he hadn’t done her wrong. Colt’s intentions are nothing but honorable, but his thoughts about Luna sure aren’t. How could he ever let a sweet girl like her go? He won’t make that mistake twice.
Luna Hill thought she lost her shot with the sexy cowboy, but sometimes lightning does strike twice. While she wants to see what one scorching kiss leads to, she’s got a job offer out of state. Will she stay stuck in her less than life, or reach for her dream? An unexpected and amazing opportunity will keep her in town and give her what her heart desires most, a chance to be with Colt, but it comes with a price that may cost Colt his life.
Colt will do anything to keep Luna safe, including put his life on the line, because nothing is more important than the woman who showed Colt he has a heart-and it belongs to her.