He plays by the rules, she’s not afraid to break them. Now these two strong-willed army captains will prove that opposites attract . . .

All Cassidy Jane Cooper wants is to fulfill her dream to compete in pro rodeo. CJ knows she’s going to have to work harder and smarter than everyone else to prove herself in the traditionally all-male saddle bronc competition. That means she shouldn’t look twice at handsome, charming cowboy, Jesse Carmody. She needs to focus on the competition, not one of her competitors. If only he wasn’t so damn hot…

Jesse Carmody thinks he’s seen it all–until CJ’s arrival throws him for a loop. She’s tough, sexy, and challenging. Jesse quickly realizes he wants to know a whole lot more about this intriguing woman. When CJ faces ugly opposition from others on the circuit, Jesse is there to offer a friendly hand–and more, if she wants it.

Between her trials in the arena and fighting to get the other riders to respect her, CJ knows getting involved with Jesse is the last thing she should do. But she can’t seem to keep away. Which leaves her with a choice–the man of her heart, or the career of her dreams? Or can she have them both?

In The Cowboy Meets his Match (79th Cooper Mountain Rodeo #1) by Sarah Mayberry, Cassidy Jane 'CJ' Cooper has made it to the big league, but the men she'll be competing against in saddle bronc aren't happy she'll be up against them. Too bad she isn't going to let any of their non-sense get to her. Luckily, she has Jesse Carmody on her side and determined to show her that not all cowboys on the tour think her competing is a bad idea. Will CJ give Jesse a chance or is happy ever after not in the cards for the pair?

This story was a marvellous start for this series due to the wonderful main characters and the obstacles they face to be together; and the compelling dialogue that drew me in from the very beginning, as CJ is definitely going to have a fight on her hands when it comes to the misogynistic men on the tour. However, it was from the moment the hero and heroine come face-to-face for the first time where this story really takes off, as Jesse is a good guy in believing that CJ deserves the opportunity to prove herself. Will his standing up for her be good for him or bad?

As for the dialogue, it was entertaining due to the main characters back stories and everything these two go through on their journey to happy ever after, as the heroine is a fighter and determined to prove herself. No way will she run scared and quit just because some of the men are afraid she's better than them. Really, she's resilient, courageous and I liked how she handles everything the jerks who want her gone do. Will she prove she has what it takes to be on the tour? While the hero, he's a good guy and I loved the way he supported the heroine because she needs all the support she can get since her dad doesn't exactly approve of her doing what she does. I also liked how the heroine helps him to finally heal from his past since he shouldn't have so much weight on his shoulders. Really, what happened in the past wasn't his fault.

Overall, Ms. Mayberry has delivered a really good read in this book where the chemistry between this couple was strong; the romance was delightful and had me loving these two together; and the ending had me loving that the heroine never gave up on the hero, even when he gave her reason to by what he does. I would recommend The Cowboy Meets his Match by Sarah Mayberry, if you enjoy the mysterious strangers trope, the friends to lovers trope or books by authors Heidi Rice, Jeannie Watt, Joan Kilby and Sinclair Jayne.

And then the world went dark.
For a moment there was nothing but silence as they both absorbed the shock.
“Must be the fuse,” CJ said, and he almost smiled at the matter-of-fact acceptance in her tone.
Did anything faze this woman?
“Yeah, Casey mentioned they’d been having problems with the electrics. Should be some fuses in one of the top cupboards,” he said.
He took a step forward—and found himself hard up against a warm, firm body as CJ evidently did the same thing. His hands came up instinctively to steady her, one landing on the flare of her hip, the other on her waist.
They both went very still. Beneath his hands, she felt warm and strong. He breathed in the smell of fresh soap and clean hair and felt himself harden into full, painful arousal. The need to kiss her, touch her, taste her was almost undeniable—but if anything was going to happen between them, it had to be CJ’s call. She was his guest, she’d had a shitty day, and she had good reasons for keeping her distance. He wasn’t going to add himself to her list of problems.
Not unless she wanted him to.
The moment seemed to stretch and stretch. He felt her inhale, felt the muscles of her torso move subtly beneath his hands. He was so hard it physically hurt, but there was a weird kind of pleasure in the pain and it hit him that he hadn’t wanted anyone this badly for years. The realization made his hands curl into her flesh, but somehow he managed to limit himself to the small gesture and cling to his self-control.
A shudder rippled through her, as though she’d just won or lost a fiercely fought battle within herself.
“Fuck it,” she said, and then she kissed him. 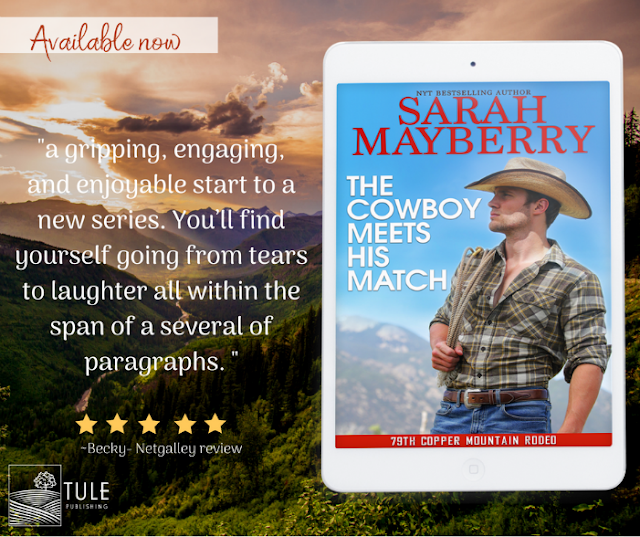 
"It must be said that Sarah Mayberry is one of Australia's most talented writers." - AusRom Today

Sarah Mayberry is the award-winning, best selling author of more than 30 novels. She was born in Melbourne, Australia, and is the middle of three children. Sarah picked up a love of romance novels from both her grandmothers and has always wanted to be a writer. In line with this ambition, she completed a Bachelor of Arts degree in Professional Writing and Literature. It took her ten years and multiple attempts before her first book was accepted. During that time, Sarah worked in magazine publishing and the television industry, contributing to the internationally known Australian serial drama “Neighbours” and co-creating teen drama series “Karaoke High”. Sarah currently splits her time between writing for television and writing novels. She lives in Melbourne by the bay with her husband and a small, furry Cavoodle called Max. When she isn’t writing, she loves reading, cooking, going to the movies and buying shoes.