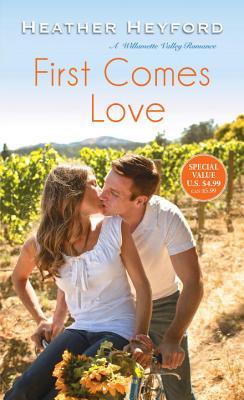 In Heather Heyford’s newest book, a single mom and attorney with deep roots in the rolling hills of Oregon’s Ribbon Ridge wine country thinks her family is perfect as is—until she crosses paths again with a gruff police officer who has two boys of his own . . .

There is nothing sweeter than the family you pick yourself . . .


After detective Alex Walker’s last case in Portland is skewered by a tough-as-nails attorney, he decides to finish out his career on a quiet note in the Willamette Valley. Dedicated to his job and committed to his family, he’s fine letting his brusque exterior keep even the thought of a relationship at bay—especially once he realizes his new hometown is the old hometown of the attorney who ruined his last case . . .

Single mom and attorney Kerry O’Hearn is just as wary as Alex is, thanks to her disastrous first marriage. But she isn’t fooled by Alex’s tough-guy image. When he asks for her assistance in gaining custody of two little boys from an abusive foster home, she sees what he desperately tries to hide: a giant-sized heart. Between them they have five kids and a whole barrel of bad experience. And yet, Kerry can’t shake the feeling that she and the crusty cop were meant to be . . .

In First Comes Love (Willamette Valley #2) by Heather Heyford, Detective Alex Walker has had enough of city life, especially after the case he testified in went belly-up. Now, he's determined to finish his career in the small town of Willamette Valley. However, it seems the attorney who won the case he testified at lives in the small town and it isn't easy to avoid her. Yet, soon Alex finds himself going out of his way to spend time with Kerry O'Hearn. But when a case he's working becomes rather personal to Alex, will Alex walk away from his shot at happy ever after or will Kerry help him fight to win this time around?

It's been a little while since I've read a book by Ms. Heyford, but I'm glad I got to read this story because I absolutely enjoyed Alex and Kerry and the secondary characters in Kerry's children and family. They're supportive and I loved that they gave Alex a chance, even though Kerry has been let down enough times by men making her promises they never keep. Will Alex prove to be the guy she needs and deserves?

As for the dialogue, it was intense due to the main characters back stories and their shared past that has them on opposite sides of the law with Alex determined to put away the bad guys while Kerry's job is to defend them. However, I liked how they made things work, even though it isn't easy since there are tough decisions to be made by the pair when it comes to a case. Moreover, I really liked both the main characters, as Kerry is a good mom, resilient and I liked that she took a chance on Alex, even though she's been hurt before and wants to concentrate on her children and being there for them more. While the hero, he's empathetic, good as his job, confident and I liked how the growing bond he shares with the heroine's kids. I also liked how willing he was to go above and beyond the course of his duty as a police officer because there are people in the world that need someone to fight for them.

Overall, Ms. Heyford has delivered a really good read in this book where the chemistry is slow building, but had me loving how the chemistry gets stronger between this pair since Alex sees Kerry as the enemy in the beginning; and the ending had me worried because of what happens, but had me loving the hero's dedication to his job and his determination to make things right with Kerry and her children. How could he possibly walk away when they've come to mean so much to them? I would recommend First Comes Love by Heather Heyford, if you enjoy the enemy to lovers trope or books by authors Sandra Owens, Jill Sanders, Roxanne St. Claire and Olivia Miles.