REVIEW: CHERISH ON THE CAPE by MK MEREDITH 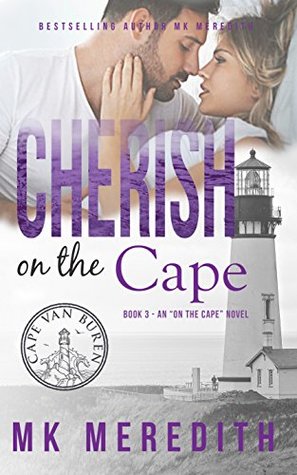 Cherish on the Cape
On the Cape #3
By MK Meredith
Releasing August 28th, 2018
Self-Published

Ever practical Claire Adams has been dealt an impossible blow, she’s lost her fiancé the night before their wedding, then shortly after, her unborn child. But for everyone else, it seems, life continues on, and with all the wedding and pregnancies in town, the aching hole in her heart continues to grow. Knowing she can’t be the only person suffering from loss, she starts a coping-through-art program at the new Archer Conservation Park of Cape Van Buren. She will never have the family of her dreams, but helping other’s overcome grief is the exact kind of distraction she needs. Until she finds herself working alongside the one man who reminds her exactly why remaining single is her best life strategy. When it comes to dating, Mitch Brennan has two simple rules: keep it casual but make every moment memorable. Only now, his life-of-the-party reputation isn’t making his run for the City Attorney’s seat easy. So he agrees to some pro bono work, consulting for the new Conservation Center—and he has one month to change people’s minds. Except escaping his playboy image is harder than he imagines, especially when he’s paired with the sexy but still grieving event planner—who is in desperate need of a happy memory of her own. But one laugh leads to a kiss, and before he knows it, he realizes he’s broken his number one rule. Now the biggest risk of all isn’t losing out on the attorney seat, it’s losing her. Can two hearts terrified of love brave the waves or will fear keep them from reaching the shores of happy ever after?

In Cherish on the Cape (On the Cape #3) by MK Meredith, Claire Adams has had it rough after losing her fiancé and her baby. She doesn't want anything to do with relationships, but she does want the chance to feel wanted by a man again just for a short time. Luckily, Mitch Brennan is willing to help her. Yet, the more time they spend together, the more she finds herself doing the one thing she knows she shouldn't -- falling in love. Will Claire and Mitch get their shot at happy ever after or do their past demons have too much of a hold on them to ever give each other a chance?

There is so much to love about this incredible series by Ms. Meredith, and I've got to say that this story is another fantastic addition and wraps up this series marvellously. Really, the main characters were enthralling due to the heroine's heartbreaking back story and the hero's reasons for not wanting a relationship; the dialogue was extremely entertaining and had me loving how these two go from enemies to lovers to finding their happy ever after; the obstacles these two face to be together had me reading quickly, determined to discover whether they'd overcome them; and the secondary characters kept me entertained as much as the main ones, even though they can be a little too interfering at times when it comes to this couple's relationship and believing they should be together.

As for the dialogue, it was intense due to the main characters back stories, especially that of the heroine, and I could understand why neither of them are looking for happy ever after with what they've both been through. However, in saying that, the heroine is resilient, courageous and I liked that she took a chance on the hero, even though he could end up breaking her heart. I also liked how these two help each other to heal and the decisions they make because love is worth fighting for. While the hero, he's confident, charming, hard-working and I liked how determined he was to show the town he's the right person for the job he wants. Will he get his shot? Will the people of the town support him? I also liked the close friendships and relationships these two have with their friends and family because they have a good support system. Then again, there's nothing like good advice.

Overall, Ms. Meredith has delivered a superb read in this book where the chemistry between this couple was off-the-charts; the romance was nicely-detailed and shows how right these two are for each other, especially since they help each other to heal from their pasts; and the ending had me loving the way these two are reunited after their relationship goes awry because they're so good together and shouldn't let anything stand in their way of being together. However, it was the epilogue that wrapped this story up nicely, as the interactions are priceless, especially when Claire manages to get the last word in and prove she can say the word everyone thinks she doesn't like to say. I recommend Cherish on the Cape by MK Meredith, if you enjoy the enemy to lovers trope or books by authors Marina Adair, Catherine Bybee, Jill Sanders and Kim Law.