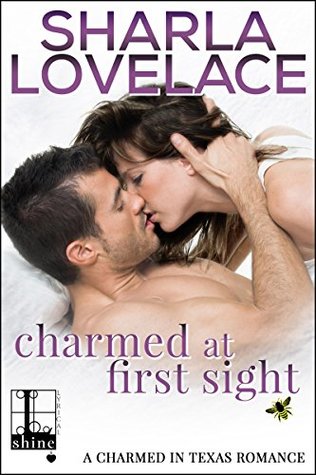 In the small town of Charmed, Texas, plenty of folks have found the path to true love. But now two outsiders have arrived to shake things up . . .   Never one to do things by the book, Micah Roman couldn’t just chalk it up to bridal jitters, or even quietly call off her wedding to her long-time fiancé. No, she has to high-tail it out of the church sporting a dress that cost more than her car, and jump on the back of a smoking-hot stranger’s motorcycle. Her knight in all-black is headed to a town called Charmed, so that’s where she’ll go and try to lay low. Except their appearance raises plenty of eyebrows . . . and a sudden, intense attraction she has no business exploring.   Who knew picking up a damsel in distress would lead to lust at first sight? Leo McKane headed to Charmed prepared to deal with some family secrets—including his status as long-lost brother. This runaway bride is an unexpected distraction his set agenda and loner lifestyle doesn’t include. She’s everywhere he turns, getting under his skin with her quirky, headstrong ways and eyes he can’t forget. But when Micah’s jilted ex comes looking for her and opens up his shady past, Leo knows he has a choice to make.   They both do.


Run to safer ground again? Or take a leap that their untrusting hearts are wary to take.

In Charmed at First Sight (Charmed in Texas #4) by Sharla Lovelace, Micah Roman is a desperate woman. So, jumping onto the back of a stranger's bike in order to run from her long-time fiancé and her wedding is what she decides to do. However, she never imagined her savior would tempt her the way he does and soon she finds herself falling for him. Will Micah and Leo fight for their shot at happy ever after or will Leo's shady past be too much for Micah to be able to handle?

Having really enjoyed the previous books of this series, I couldn't wait to read this book, and I've got to say that Ms. Lovelace has penned another wonderful read for this series where the main characters have plenty of chemistry; the dialogue was riveting due to the main characters back stories because Leo has a lot to make up for with his brother while the heroine discovers more and more that she made the right decision in running from her wedding because her groom-to-be is an absolute piece of work that doesn't deserve her. However, it was from the moment the hero and heroine come face-to-face for the first time that completely drew me into this story, as Leo just happens to be in the right place at the right time for Micah and she couldn't be more thankful.

As for the dialogue, it was intense due to the main characters back stories and everything these two go through on their journey to happy ever after including dealing with an ex that can't let what Micah did go and the heroine learning about Leo's past and how it ties into her present. Moreover, the heroine is strong and brave when it comes to confronting the man she left at the altar and I liked that she didn't stop fighting to get back things that were rightfully hers. I also liked the close relationship she has with her siblings and that they would do anything for her, especially since she did the right thing by not going through with the wedding. Yet, what I liked most of all about the heroine was that she took a chance on Leo, even though there are things in his past that have proven he lets people down. Then again, Leo is doing everything he can to make things right, so he's got that going in his favor.

While the hero, he's been through a lot in his life, which wasn't always easy. Really, he has a lot of regrets, especially when it comes to the one person he cared about and tried to take care of, yet ended up failing. Will he be able to make things right with his brother? Will his brother give him a chance, considering how badly Leo let him down in the past? Moreover, the hero was kind in doing what he did for Micah and I liked how protective he was of her when it came to helping her deal with the man she ran out on before she was to be married. I also liked his confidence and how he's managed to turn his life around to get to where he is.

Overall, Ms. Lovelace has delivered a really good read in this book where the chemistry between this couple was tangible; the romance was well worth the wait once Micah and Leo realized they could no longer fight their feelings; and the ending had me worried for the main characters, but had me liking how protective the hero was of the heroine. However, what I liked most of all about the ending was that Micah realized life was so much better with Leo in it. So, how could she not want to fight for a future with him? I would recommend Charmed at First Sight by Sharla Lovelace, if you enjoy the mysterious strangers trope, small town romances or books by authors Kelly Moran, Marina Adair, Miranda Liasson and Jill Shalvis.