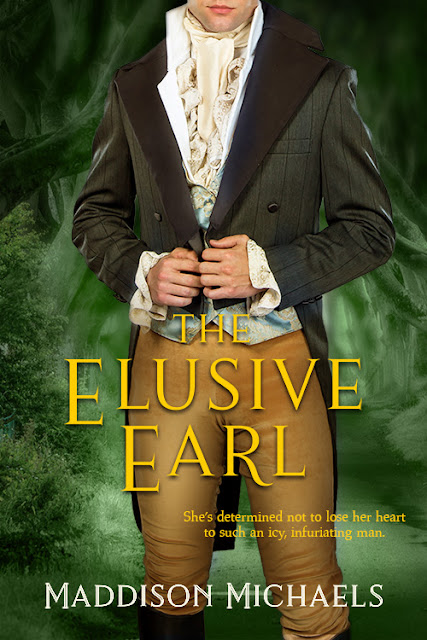 Brianna Penderley has a knack for getting into precarious situations, especially when it comes to her love for archaeology. In the heart of Naples, her terrible Italian has her accidentally becoming engaged to two men at the same time. Of course, Daniel Wolcott—the Earl of Thornton and the only man ever able to vex her—shows up to rescue her.

Daniel has spent the majority of his life exercising rigid control over his emotions, determined never to become the rake his father was. But when he goes to aid his mentor’s danger-prone niece once again, he finds himself struggling to control his attraction to a woman who is his complete opposite.

When their situation goes from bad to worse, Daniel and Brianna find themselves swept up into a perilous adventure, and they must work together to set things right. Now, if they can just avoid killing each other in the process.

In The Elusive Earl (Saints and Scoundrels #2) by Maddison Michaels, Brianna Penderley always manages to get herself into situations that she needs someone to help her get out of. However, this time, she's managed to get herself into a situation she might not be able to get out of when she becomes engaged to two men. Luckily, her fix-it man Daniel Wolcott is a man that knows what it takes to get a job done. Then again, he's always been her knight in shining armor. It's just too bad they don't like each other, otherwise they'd be perfect together. But with trouble brewing; trouble that leads back to the death of her parents, will Daniel be able to keep Brianna safe or will they lose their chance at happy ever after?

Having absolutely loved the first book of this series, I couldn't wait to read more by this wonderful author and this second book of Ms. Michaels Saints and Scoundrels series is a highly entertaining, fast-paced, captivating read that takes readers on quite the journey delving deep into the greed of evil people, discovering the whereabouts of a treasure that many want and learning what got the heroine's parents killed and who was responsible. Will Brianna and Daniel be able to solve the mystery? Will Daniel be able to protect Brianna from the danger they face?

The way this story started was absolutely brilliant because the heroine does manage to get herself into some tricky situations and it's understandable why she needs someone to help her get out of them. However, it was from the moment the hero and heroine come face-to-face for the first time where this story really takes off and made this story an absolute page turner, as the two rub each other the wrong way. Will they ever be able to get along long enough to have a shot at a future together?

As for the dialogue, it was intense due to the main characters back stories and everything these two go through on their journey to happy ever after including the danger they face and the shocks the heroine gets when it comes to her heritage. Moreover, both the main characters were utterly compelling and had me reading quickly, determined to discover whether they'd come out on top against the bad guys.

With the heroine, she's strong; brave; stubborn; feisty; persistent in her pursuit to find someone she loves before something bad happens to them; and I liked that she didn't give up on getting to the bottom of the mystery and do all she can for someone she loves. Really, she's an absolute challenge for the hero and I could understand why Daniel finds her so exasperating at times. While Daniel, he was a wonderful hero in the way he's confident in his skills in getting the heroine out of trouble; smart; driven; and I liked how he would do anything for the heroine's family because he considers them family. Really, they've been so good to him over the years. However, I couldn't help but sympathize with the hero when it comes to his reasons for not wanting a relationship because he doesn't want to hurt a woman the way his father hurt his mother. Will he realize that he's not his father before he loses Brianna for good?

Overall, Ms. Michaels has delivered a marvellous read in this book where the chemistry between this couple was powerful; the romance was engrossing and had me liking these two together; and the ending had me worried for the main characters because of the danger they face, but had me liking what the hero does to win back the heroine after their relationship goes awry. Certainly, he knows how to woo a woman, even if his skills with an instrument aren't all that impressive according to the heroine's aunt. However, it was the epilogue that wrapped this story up nicely, as the hero and heroine certainly get a good surprise. I would recommend The Elusive Earl by Maddison Michaels, if you enjoy Historical Romance, the enemy to lovers trope or books by authors Stacy Reid, Jess Michaels, Pamela Mingle and Callie Hutton.

To celebrate the release of THE ELUSIVE EARL by Maddison Michaels, we’re giving away for a $25 Amazon gift card!

Indoctrinated into a world of dashing rogues and feisty heroines when she was 14 years old, MADDISON MICHAELS is a prolific reader and writer of romantic suspense and historical fiction. She gets her daily dose of suspense from prosecuting real life villains in the Courts.

A member of the RWA and RWA Australia, Maddison is as passionate about her writing as she is about her other two loves; her family and her cups of tea. Luckily she gets a healthy dash of romance married to her wonderful husband and her exercise regime is kept on track by her six-year-old daughter, who ensures Maddison is kept very busy chasing her around.

Maddison’s historical novels are her way of time traveling back to Victorian London to experience a cornucopia of intrigue, romance and debauchery all from the comfort of her living room! Her next novel ‘The Elusive Earl’ is the second book in her ‘Saints and Scoundrels’ series, and is set in the same world as her first book ‘The Devilish Duke’.