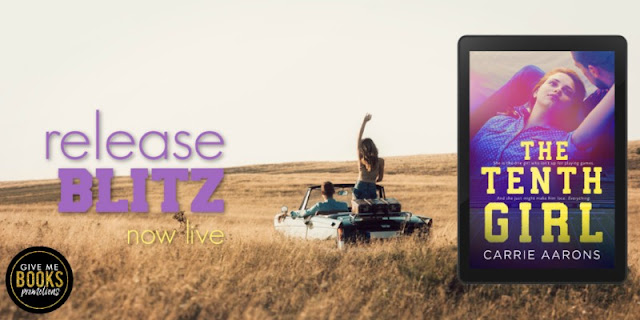 For Cain Kent, that rule is golden. Losing is not in his vocabulary, and up until now, everything has come easy. Football, school, girls ... his charm-laced ego may just be bigger than Texas itself.

The competition he started freshman year with his friends, to make ten notches each in their bedposts by graduation day, is practically in the bag. One more to go, and then it's off to college fame and eventually, the big time. Attachments aren't something he wants to form, but when the quiet new girl challenges him in front of his classmates, his curiosity is peaked. She would be the perfect final score, and what fun to break her in the process.

Too bad Harper Posy has no intention of being just another warm body, especially to the bad boy quarterback. Even if he does quote Forster and Huxley when no one is listening. An aspiring author herself, Cain and his hidden soft side are dangerous to her heart. She's seen men ruin her mother's dreams time and again, and she's determined to fly far away as soon as she has that diploma in her fist.

But as the school year’s end looms closer, both realize they didn’t quite understand the rules to begin with. Is winning a dirty bet worth the gamble when the stakes, or the other’s heart in this case, are so high?

Harper is the one girl who isn't up for playing games. And she just might make Cain lose. Everything.

In The Tenth Girl by Carrie Aarons, Cain Kent is determined to win the bet he's made with his friends -- to have sex with ten girls before the year is out. However, there's only one girl he wants to be number ten and that's the new girl, Harper Posy. Yet, he soon discovers Harper isn't going to be easy to win over. She's nothing like other girls where they'll do anything to get his attention. Will Cain be able to win Harper over or will the truth about the bet lose him the girl he's fallen in love with?

This is the second book I've read by Ms. Aarons and I've got to say that I love her style of writing. It flows really well and this story had me hooked from beginning to end due to the main characters back stories and their growing relationship, especially since they're as different as night and day with the hero being the most popular boy in school and the heroine being someone that doesn't really care what people think of her, which is proven when she stands up to the hero for doing something wrong.

As for the dialogue, it was entertaining and intense due to the main characters back stories and the obstacles these two face to be together, as things the heroine discovers about the hero leave her jealous and not sure whether she can trust him. Will Cain be able to prove to the heroine she can trust him? Moreover, the heroine is resilient, courageous, driven to follow her dream to become an author and I liked that she gave the hero a chance, even though it's every bit possible that she could end up getting hurt. While the hero, he's confident, charming, protective of the heroine and I liked how determined he was to win over Harper, even though he's doing it for the wrong reasons in the beginning since he wants her to be his number ten girl. Will Harper be his number ten girl or will he see that the bet isn't as important as the girl he's fallen in love with?

Overall, Ms. Aarons has delivered a fun and fantastic read in this book where the chemistry between this couple was strong; the romance was heart-warming, as Harper puts her trust in Cain when she's finally ready; and the ending had me loving the hero's determination to win back Harper, especially since she's the one for him and there's no way he'll be able to forget her if he can't have her in his life. Will Harper be able to forgive Cain? Yet, it was the epilogue that wrapped this story up nicely, as Cain and Harper have come so far in the two years they've been together and have accomplished so much. I would recommend The Tenth Girl by Carrie Aarons, if you enjoy New Adult Romance, the opposites attract trope or books by authors Cindi Madsen, Robin Bielman, Lynn Stevens and Lexi Lawton.

When she isn’t writing, Carrie is busy binging reality TV, having a love/hate relationship with cardio, and trying not to burn dinner. She lives in the suburbs of New Jersey with her husband, daughter and dog.