A scandal ended the careers of the Wilder Sisters, the chart topping country rock band. But Lexi Wilder is okay with that, thanks for asking. She's been on the road since roughly forever, and even if the scandal has followed her home to Whistle Cove, California, Lexi is going to enjoy the break. After all, there's quite nothing like the beautiful sandy beaches of Monterey Bay to calm a woman's soul.


Luke Wyatt never asked to trade fame and fortune for the only woman he's ever loved.

Now that he's finished a punishing year-long national tour, all bets are off. He's coming back to his hometown of Whistle Cove for the quiet, the beaches, the inspiration, and the girl. Not necessarily in that order. There's pressure from Nashville to deliver more country gold like the #1 song he co-wrote with Lexi Wilder.

But Lexi can’t forgive Luke for choosing fame over her…

In Country Gold (Wilder Sisters #1) by Heatherly Bell, Lexi Wilder finally feels like she's able to breath and not have to worry about a thing except helping her sisters run their Gran's B & B, especially after the scandal that sent her and her sisters into hiding to get away from the press. However, when Luke Wyatt comes back into her life looking for a second chance, she doesn't know whether getting involved with him again is a good idea. Not when he's so famous and she doesn't know whether she'll ever want to be part of the spotlight again. Will Luke be able to convince Lexi that they're meant to be or will she walk away from her second chance at happy ever after because she doesn't know whether she'll be able to ever trust him again?

What a wonderful start to this series Ms. Bell has delivered in this book where second chances are possible; the main characters were relatable and likeable, as being in the music business can take a toll on one's personal life, especially when they love their privacy; and the dialogue was compelling and a fantastic combination of intense moments due to the main characters back stories and everything this couple go through on their journey to happy ever after as Luke does everything he can to win Lexi back and playful banter that had me liking the close relationship the Wilder sisters share.

The way this story started had me liking the hero immediately, but also had me sympathizing with him because being a top country music artist is taking it's toll on him. Seriously, he needs a break and I could understand why he sees now as the perfect opportunity to get the woman he loves back. Will Lexi give Luke a second chance? How long will it take Luke to win Lexi over? Moreover, the heroine is strong and brave to have been able to bounce back from the scandal that lost her and her sisters everything and I could understand why she guards her privacy like she does now. I also liked how she challenged Luke because it's not easy to forgive him. From Lexi's point-of-view, how could he put his career ahead of their relationship, especially when he claimed he loved her so much? Is she being unfair to Luke? It takes two for a relationship to work.

While the hero, he's confident, charming and I liked how determined he was to win the heroine back, even though he knows it's not going to be easy after everything she's been through with the scandal and then what happened between them to make their relationship go awry. I also liked that he acknowledged his fans the way he does, even though some of them get to be a bit much. Then again, he's doing a good thing for the Wilder family while he's in town, so why shouldn't Lexi want to give him a second chance. However, in saying that, she's stubborn and independent and doesn't need anyone's help. Will she accept all Luke is offering including helping with the B & B?

Overall, Ms. Bell has delivered a really good read in this book where the chemistry between this couple was strong; the romance was delightful, as these two find their way back to each other; and the ending had me loving how the hero never gave up on winning Lexi back, even though there were only so many times she could doubt his feelings for her. How could she possibly believe he was using her? He's already made it as a country music artist. However, it was the epilogue that wrapped this story up nicely, as these two are so good together and it was wonderful to see that Lexi didn't give up on her career. Certainly, her and her sisters would get past the scandal sooner or later. I would recommend Country Gold by Heatherly Bell, if you enjoy second chance romances or books by authors Erin Nicholas, Stephanie St. Klaire, Samantha Chase and Barbara Freethy. 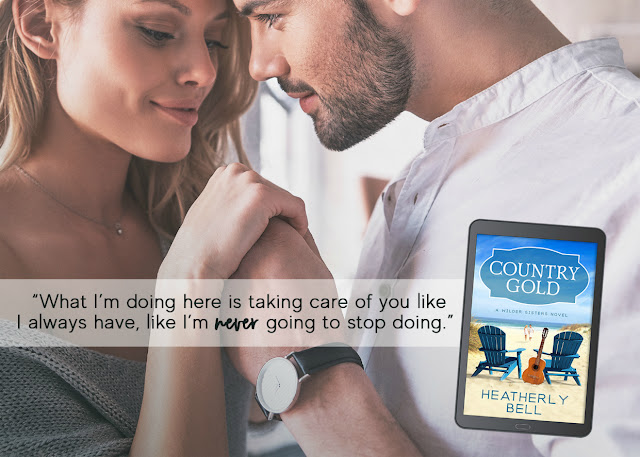 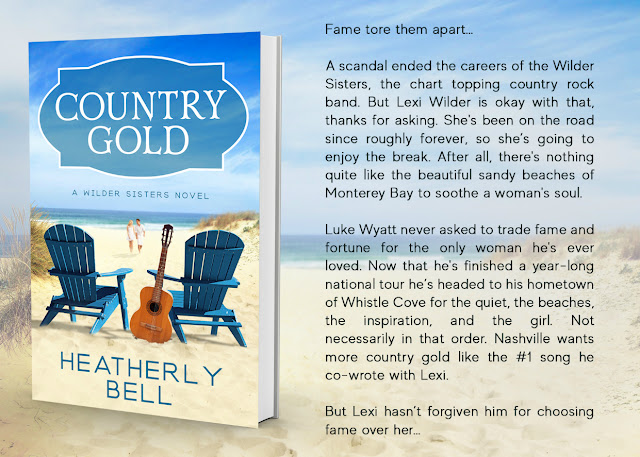 She recognized the deep voice, the smooth sound of whiskey if it could speak. Lexi whipped around to face Luke Wyatt. Her heart hiccupped at the sight of his long and lean body braced against the side of her cottage. One corner of his mouth tipped up in a half smile and he studied her with those deep and fathomless dark eyes.

Her mouth was dry. Knees? Liquid. “W-what are you doing here?”

“Wasn’t going to give you the chance to say you don’t want to see me.” He moved away from the side of the house and took a step toward her. “Tour’s over. I’m home.”

Despite her churning gut, she found her voice. “We have no vacancy. You’ll have to stay somewhere else.”

He went brows up. “Just checked in.”

When she didn’t speak, but simply swallowed and blinked, trying like hell to regain her balance, he filled in the silence.

She was so not prepared to deal with this today. With him. “Why would I be mad? You mean because you wrote an entire album all about our private life? Every single private and personal thing about us. After everything I’ve been through with Sabrina. No, why would I be mad about that?”

“Baby,” he said, squaring his shoulders. “It’s what songwriters do. We write about our life, the pain and the joy.”

“You didn’t seem to be hurting. You were all over my TV set, cozying up to gorgeous models and reality TV stars.”

She’d seen the woman practically on Luke’s lap at a televised awards show. And he was mad she hadn’t called him back? If he’d been hurt when she stopped taking his calls, he sure in the hell got over it quickly enough.

He took a step toward her making her take one back. No, no, no. Already she felt her body buzzing from being this close to him for the first time in a year.

“Give me a break, Lex. You know what this life is like. I didn’t even know that woman.”

Lexi did an internal face palm. No, no. It would not go this way. Check her out letting loose with all her pent up hurt and anger the minute he showed up, giving Luke every indication of how much she still cared about him. If she didn’t care at all, maybe the rumors of these women wouldn’t bother her so much. So she’d already blown her cover in the first twenty seconds of seeing him. Get a grip.

She’d expected to do much better than this if she ever ran into him again, say in Nashville while visiting Miranda Lambert to collaborate on some songs. Lexi would have another hit song by then. Maybe she’d be dating another handsome country singer not named Luke Wilder. She’d be over him by then.

Chalk it up to running into him so unexpectedly but this wasn’t how it was supposed to go. He shouldn’t still look so good to her, his beard making him look like a strong mountain man. Like a man who would take care of his woman.
For Luke, it turned out his career came first. Not her.

But the thing to do here was pretend it didn’t make a difference whether he stayed or left. Pretend he had that little effect on her. Maybe it wasn’t too late to salvage what little was left of her pride.

He quirked a single brow. “Yeah?”

Score one for Lexi. She’d shocked him. Good.

“Of course. You’re a paying guest and I’m usually not so…so…”

“Pissy?” He gave her another smile, this one lifting both corners of his mouth and demonstrating he still had the power to render her speechless when he laid on the charm.

“Yeah. Pissy.” She let out a half-hearted fake laugh and waved hand in the air. “Rough day. You know how it is. Sisters.”

Luke had a front row seat to the implosion of the Wilder Sisters. He’d been performing alongside them at the stadium in Oklahoma when Sabrina had her public mini-meltdown. Even though their demise as a band had meant his opportunity for stardom, Lexi didn’t doubt he’d been sorry about the way it had all happened.

When she’d been worried about Sabrina, whose entire life from the time she’d been ten had been the stage, Luke had held Lexi every night until she fell asleep, assuring her that Sabrina would survive this. They all would. And she’d fallen even deeper for the man. Luke reminded her there would be life after all the speculation and rumors. Because Luke Wyatt knew a lot about scandal. He understood what it was like to feel like you had to apologize just for being allowed to breathe the same air as everyone else.

“She’s okay. Still walks around with ear buds in all the time, singing and dancing. It’s in her blood. But I don’t think she wants to get back up on a stage anytime soon. None of us do.”

He nodded, as if he understood all too well. “And you. Are you still writing?”

Never again with you.

The wall was still up and there it would stay. If anything, she’d wallpaper it. But she was a Wilder first and foremost, and yes, they could put on a show.

She shrugged and got ready to lie. “Here and there.”

“I’m supposed to write a few more hit songs.” He held up finger quotes. “They want me back in the studio next week. So I thought I’d come here and relax. See if I can find some inspiration.”

His gaze took a slow slide down the length of her body and she almost felt…naked. She was so not going to be his inspiration. Not this time. He’d taken enough material from her already.

She took a breath and went for deep sincerity. “I hope you find what you’re looking for, Luke.”

And with that she opened the door to her cottage and closed it in his face.

She lives in northern California with her family.