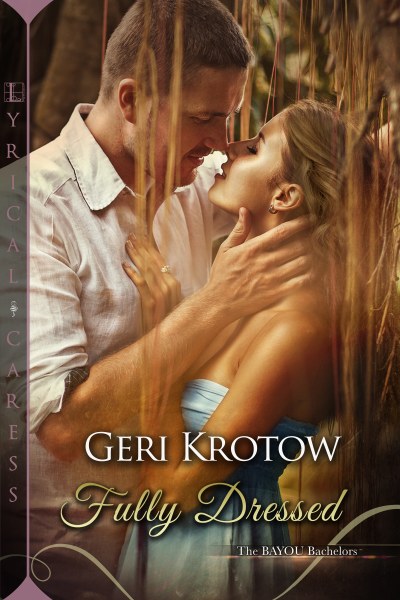 There’s nowhere hotter than the South, especially with three men who know how to make the good times roll. But one of the Bayou Bachelors is about to meet his match…
New York City stylist Poppy Kaminsky knows that image is everything, which is why she’s so devastated when hers is trashed on social media—after a very public meltdown over her cheating fiancé. Her best friend’s New Orleans society wedding gives her the chance hide out and lick her wounds...   Brandon Boudreaux is in no mood to party. His multi-million dollar sailboat business is in danger of sinking thanks to his partner’s sudden disappearance—with the company’s funds. And when he rolls up to his estranged brother’s pre-wedding bash in an airboat, a cold-as-ice friend of the bride looks at him like he’s so much swamp trash.


The last person Poppy should get involved with is the bad boy of the Boudreaux family. But they have more in common than she could ever imagine—and the steamy, sultry New Orleans nights are about to show her how fun letting loose can be…

In Fully Dressed (The Bayou Bachelors #1) by Geri Krotow, Poppy Kaminsky needs to get away from New York now that her life has imploded and been splashed all over social media. Luckily, her best friend is getting married and she'll be spending time house-sitting for the happy couple. However, when a storm rolls through New Orleans causing Poppy to have to find shelter elsewhere, she finds herself living with Brandon Boudreaux, the groom's brother and a man that has his own troubles after his best friend cleared out their business account and has disappeared without a word. Will Poppy and Brandon help each other to heal from the wounds of their pasts or will they walk away from their shot at happy ever after because they find it hard to trust?

This story starts off this series brilliantly and was extremely entertaining from the very beginning, as Poppy's world has imploded and it's understandable why she needs to get away where hardly anyone knows her. However, it was from the moment the hero and heroine come face-to-face for the first time where this story really takes off, as Poppy and Brandon are complete opposites, and yet, it's palpable that there's plenty of chemistry between them no matter how hard they're determined to ignore it. Will Poppy and Brandon give each other a chance?

As for the dialogue, it was intense and compelling due to the main characters back stories because the heroine is going through one of the toughest times of her life that could end badly for her, if she doesn't start to fight back against the injustice of what her ex and her ex-assistant did to her. Will Poppy fight back and be able to get back to the career she loves without any more problems? Furthermore, the heroine is strong, brave, hard-working and I loved the decisions she makes throughout this story because they're the right ones for the next step of her life and her future. I also liked how she proved herself when it came to how good she is in her chosen career, which is proven by her interactions with people that need her help when it comes to fashion decisions.

While the hero, he's confident, charming, hard-working, the black sheep of the family because he got out from the horribleness that is his parents and is doing his own thing, and I liked that he was finally building a good relationship with his brother. No way should they let the past come between them any longer, especially with everything going on with Henry and Sonja. I also liked the hero's determination to win over the heroine, even though he knows she's going to leave to head home to New York. Will Poppy leave for good?

Overall, Ms. Krotow has delivered a really good read in this book where the chemistry between this couple was intense; the romance was well worth the wait, as the heroine doesn't trust easily after everything that happened with her ex; and the ending had me loving that the hero doesn't give up on the heroine because they're good together. Really, she needs him just as much as he needs her, especially when Brandon's future with his ship-building business is up in the air after what's happened with his best friend. I would recommend Fully Dressed by Geri Krotow, if you enjoy the opposites attract trope or books by authors Peggy Jaeger, Tara Sheets, Annie Rains and Stefanie London.

“Poppy!”
Poppy Amberlin Kaminsky had never been so happy to hear her real name, no matter that she’d spent the last eight hours and had taken a taxi, train, and plane to do so. All to get to a place she swore she’d never come back to after a Spring Break visit almost a decade ago.

It was hard to tell whether the New Orleans’ Bayou air or her best friend’s cloud of Kate Spade Live Colorfully perfume embraced her first, but once Sonja’s arms crushed her against the familiar curvaceous figure of her college bestie, it didn’t matter. Poppy meant to give the bride-to-be a reassuring, ‘glad to see you’ hug, but instead ended up holding on for dear life. Tears shoved past her carefully made-up eyes, threatening to drip off her lash extensions. They were the only part of her previous life that she’d kept.
Sonja pulled back and stared. “Let me get a good look at you. What the hell did you do to your hair?”
Sonja’s expression reflected the shock Poppy had also experienced at her first glance of her new ‘do. Gone was her, or rather, Amber’s, signature sleek brunette bob. Her wild waves were back, as was her honey blonde ombre, albeit with a little more brass. She self-consciously reached for her bleached locks. “It’s part of my get-away disguise.” As was the huge pair of sunglasses she’d worn from New York City to Louisiana, which had worked since she’d garnered minimal attention on her flight. An unusual event for Poppy since being publicly dumped and Twitter-shamed by her ex-boyfriend. ‘Ex’ as in ‘I want to draw an ‘X’ across his face every time I see it.’ “It’s my real color, so at least the roots will grow out with no issue.”
“Aw, boo.” Sonja lifted the shades from Poppy’s nose as she uttered the Cajun endearment and Poppy wanted to weep with the relief of having the one person who really knew her—who got who she was, who she’d been, how far she’d come—look into her eyes and smile with no judgment. “That rat-ass did a number on you, didn’t he?”
Poppy shrugged. “Screw him. That’s history, baby. Two months and twelve hundred miles away. I’m here, and you’re getting married!” They both squealed and hugged, hopping around as if they were still college roommates with big dreams in front of them. Intact dreams that weren’t shattered in skin-piercing shards about their feet, as were Poppy’s.
“I can’t wait for you to meet Henry.” Sonja gushed as she opened the hatch of her BMW SUV and reached for Poppy’s tote. “And he can’t wait to meet you.” Poppy put her sunglasses back on and took in the upgraded Sonja. Gone was the straightened shoulder-length hair of their college days, replaced with a sexy soft afro. Lustrous pearl drop earrings set off Sonja’s mocha skin. No more flip flops but designer wedge sandals. Sandals that matched her thousand-dollar bag.
“What?” Sonja didn’t miss a beat. “Oh, these old things?” She posed like the magazine model she resembled but after a split second bent over in laughter, her smile flashing as honest and warm as it had ever been. “Poppy, you look like you can’t believe it. A nice paycheck and fancy clothes aren’t exclusive to New York City.”
“Did I ever say they were?”
“You don’t have to. Hell, I’ve been trying to get you here for years and I had to go and get knocked up and married before you showed.”
Poppy’s stomach flipped. “You’re pregnant?”
“Surprise!” Sonja threw her arms up in a big ‘V’, joy radiating from every inch of her curvy frame. Which was about to grow rounder. “But it’s going to have to be our secret. It’s super early, but I have all the signs and symptoms. I’m waiting until our wedding night to tell Henry. That man is always surprising me, spoiling me, and I want to be able to do it for him, just once.” Sonja’s eyes sparkled the way Poppy had once dreamed hers would. Once she was married and having Will’s babies.
“How exciting!” Her response sounded so lame even to her own ears. It wasn’t Sonja’s fault that Poppy had planned to be pregnant with her own baby by now, after having her own spectacular wedding on Will’s yacht as it cruised Long Island Sound. She decided on the spot to save her pity-party for later. This weekend her wounds had to remain in her room, away from Sonja and the gazillions of Louisianan’s she was about to meet. She hadn’t packed mini-bottles of Maker’s Mark and a two-pound bag of Hershey’s kisses for nothing. Although as the heat was already weighing in on her, she’d be lucky if the chocolate drops weren’t all mush.
Brushing her ruminations aside, Poppy leaned forward and gave Sonja a solid kiss on the cheek, seriously happy for her friend. And for herself—it was a relief to close the door on her sad life for the next few days. “We have a lot of catching up to do. I know it’s your big weekend, and that we can’t do it all now, but I have to tell you I’m so thrilled to be here with you, and happy that you’ve found your soul mate.”
Sonja laughed and gave her another quick hug before she hustled them both into the car and drove away from the New Orleans airport.