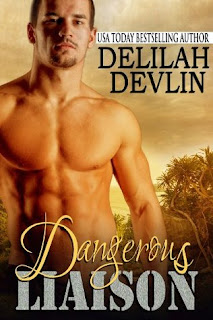 In Dangerous Liaison by Delilah Devlin (Adventure Girls, Inc #1), Maya Cordoba was enjoying herself immensely, learning various survival techniques at an anti-terrorist training camp, until she finds herself on the wrong end of an AK-47. Having the gun pointed close to her face isn't the worst thing though. Instead, she finds the men are determined to kidnap her, for reasons unknown. It's not as if she's anyone important.
DEA agent Angel Rickman's assignment is to learn the identity, of a rival drug lord's daughter, for the men his undercover investigation involves. However, when said men kidnap Maya, assuming she's the one, he finds he'll compromise the whole operation to make sure Maya remains alive.
I absolutely loved how the plot started. It was action-filled, fast-paced and definitely delivers some nail-biting moments with its suspense. Maya's emotional struggles come through loud, and clear through the dialogue. How she remained so resilient throughout was a testament to her strength. Her ability to deal, and trusting Angel so much wouldn't have been easy to someone with her history. As for the dialogue, it was really intense. Which didn't really surprise me, considering the situation Maya found herself in. Both characters are likeable, especially Angel. He's the sort of hero any woman would want around when all hell breaks loose. He's tough, and certainly knows how to deal with any situation thrown his way, including a hysterical woman.
Juicy sex scenes light up several pages, yet I was disappointed. Their romance felt like it was mostly based on the adrenaline-fueled rush, of being thrown together so unexpectedly. That if it wasn't for that, that they wouldn't have had much in common, and probably wouldn't have met under different circumstances.
Overall, I thought this was a good book, which had moments that really impressed me. While others, not so much. Yet, I'm still going to read the other books of this series, as I do enjoy this author's writing. I would recommend it to romance readers that enjoy a book, where the hero and heroine find themselves thrown together, and forced into a situation where they need to rely on each other to survive.
Overall Rating:

BOOK INFO: Self-Published / February 10th, 2014 / Adventure Girls, Inc #1
After surviving a week of anti-terrorist training at a school deep in a Central American jungle, learning evasive driving techniques she’s sure will help her negotiate Chicago’s rush hour traffic, Maya Cordoba is ready to kick off the mud from her designer boots and find a Starbucks—or the closest cantina serving cosmopolitans—after she hijacks her sexy driving instructor. Instead, she finds herself staring down the barrel of an AK-47 (which she recognizes from her weapons familiarization class, thank you very much!), and being ordered in incomprehensible Spanish into a SUV. She’s being kidnapped! When she figures out she’s been mistaken for the daughter of a rival drug lord, it’s too late. If they learn she’s not who they think she is—she’s dead. Rescue comes from ex-marine and mercenary/now instructor, Angel Rickman, who just so happens to be among the kidnappers. He says he’s really undercover DEA and he’ll take her out, but she has to do everything he tells her to, no balking. Together, they make a mad dash through the jungle, borrowing a cocaine-laden boat, with the drug cartel’s army on their tails every step of the way. Of course, a sexy guy knows just how to soothe a girl's fears...