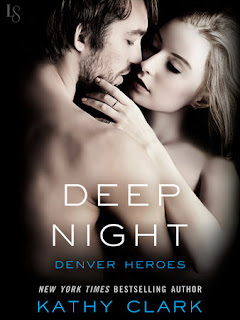 ﻿
In Deep Night (Denver Heroes #3) by Kathy Clark, Sara Richards and Chris Wilson were once very close friends, and it seems time hasn't changed that, even though they haven't seen one another in a few years. Working alongside each other, in their profession as paramedics, they've witnessed their fair share of traumatic situations, but Sara has never forgotten the one that has left it impossible, for her to trust a man.
Chris Wilson believes he still knows Sara pretty well, yet an air of sadness surrounds her, which he can't figure the reasons for. When she extends him an invitation to move into the spare room of her apartment, he takes her up on the offer. Determined to learn the truth, he's shocked by her confession. Still, it doesn't stop his growing feelings, or the fact that he'd do anything to help her move forward. To hopefully, lessen the nightmares, and maybe create some wonderful new memories.
Right from the prologue, I knew this book was going to take me on an emotional rollercoaster. Its plot drew me in immediately, and Sara's back story definitely sets the pace. The plot was riveting, not only because this author did a great job penning the various days in the life of a paramedic, but because the dialogue reveals the back stories of both Sara and Chris really well. And you can't help but be touched by how Sara struggles everyday to make sure her façade as a strong woman remains intact. That no one witnesses how vulnerable she really is.  The sex scenes were hot, and definitely show Sara at her most vulnerable. Trusting a man again was definitely the first step in the healing process for her.
In the end, I thought this was a really good read with wonderful main characters, as well as secondary characters that I really want to learn more about. I would recommend this book, if you're a fan of ex-military heroes, or love a story that tugs at your emotional heartstrings. Have a tissue handy, just in case.
Overall Rating:

BOOK INFO:  Loveswept / 18th August, 2015 / Denver Heroes #3
Ex-soldier Chris Wilson lost too many friends to war. Back home in Denver, he’s trying to make a difference as a paramedic, treating victims of crisis situations. Not even active combat could prepare Chris for the rush he gets when violence and tragedy collide, but the job isn’t the only thing making his heart race. His partner is his closest confidant from childhood, and the girl he remembers is now a strong, sensual woman . . . who needs him more than ever.

Sara Richards is more comfortable risking her life than asking for help. The petite blonde medic put a wall around her heart long ago, vowing to never let anyone hurt her again. Only now her long-buried secrets threaten to destroy everything she’s built. And though she should be able to trust Chris, his smoldering blue-gray eyes ignite desires that feel more dangerous than whatever’s lurking in the shadows. For once, Sara can’t go it alone. But Chris might just be stubborn enough to stand by her side as she faces down her worst nightmare.
+Add to Goodreads
at 16:43